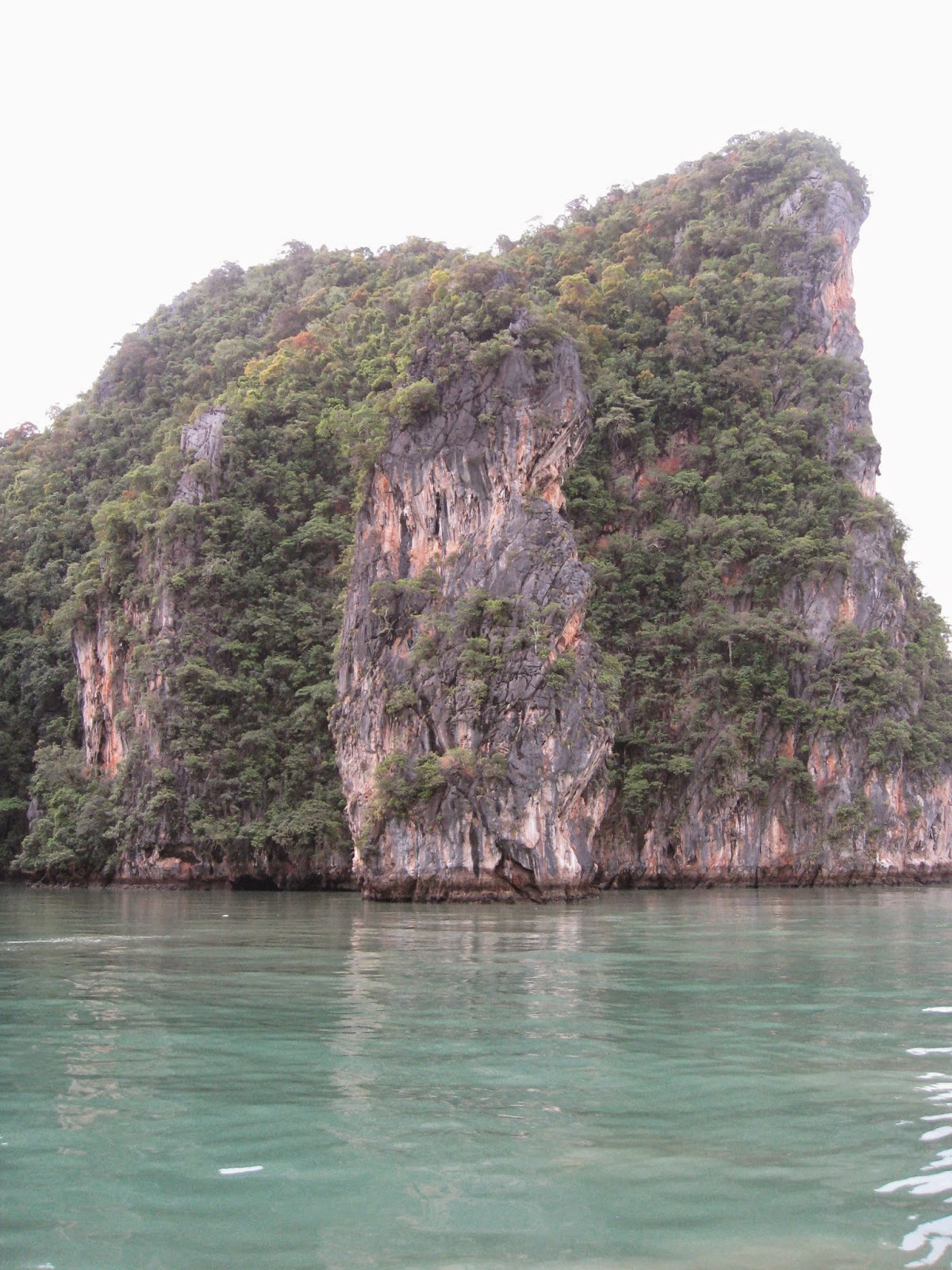 How to begin to describe a day like this one?  The final event of a most extraordinary day was a midnight swim off our catamaran Happy Eva as we were anchored in the calm, warm waters of a gorgeous bay in the Koh Hong island group, northeast of Phuket.  The water was full of phosphorescents so every movement of your body would produce a rainbow of colour in the water.  I have never understood exactly what these creatures are, but the best description would probably be tiny underwater fireflies.  After my swim, I got back on the boat, dried off, and then noticed a single phosphorescent on the tip of my index finger, which remained illuminated for several minutes.  When he disappeared, I disappeared into our cabin and nodded off quickly in the starboard pontoon of the gently floating Happy Eva.

But the day did not begin on the water.  We had a speedy buffet breakfast at the hotel, checked out, picked up Todd and drove to the Tesco Lotus to buy the fresh food required for the trip.  We picked up chicken breasts, pork loins, a few whole fish, fruit, vegetables, milk, and a few other dry goods we forgot the previous day such as aluminium foil, M&M’s and seaweed chips.

We arrived at the Yacht Haven marina around 9:30 in the midst of a massive downpour.  “You didn’t see this in the brochure, did you?” joked Melissa, our contact from the charter company Elite Yachting.  We loaded up our remaining gear on Happy Eva, which would be our home on the water for the next five days.  She was a beautiful boat, practically new and had so much more space than we were used to in our sailboat.  Ana and I took the cabin on the starboard pontoon, which also held the bathroom, and the kids and Todd each took one of the other two cabins in the port side pontoon.

The charter staff first gave us a briefing on the sailing conditions, weather and highlights of the area in which we would be sailing.  They also hooked us up with two fishing rods and an assortment of lures which gave us visions (delusions?) of landing a 300 pound marlin or a 50 pound barracuda or perhaps even a giant sailfish.  We then went down to the boat and they gave us an overview of all the major systems: navigational electronics, fresh water system, toilet and shower, engines, breaker panel, refrigerators, propane tanks, sails, anchor windlass and finally, what would be the most critical piece of equipment for island exploration – the dingy!

We had a good lunch at the marina café as we waited for the weather to break, and sure enough, as we were paying our bill the clouds cleared and we were back to sunshine.  We got back on the boat and I called the marina office on the VHF radio and told them we were ready to leave and they then sent down two boys to untie us and show us the way out of the marina.  I powered up the twin engines, slowly backed out of our slip, engaged the forward gear, then slowly and carefully navigated the vessel down the channel and out of the marina.  We were on our own and the journey had begun!

Within ten minutes we had seen two flying fish launch out of the water and fly rapidly, just above the surface, sometimes touching the water briefly, then relaunching, leaving a string of expanding wave circles across the ocean surface.  The catamaran felt huge and much different than a monohull sailboat as there is no rocking back and forth, just a steady forward momentum powered by the twin 30 horsepower Volvo diesel engines.  The amount of living space on the boat is incredible, probably three or four times as much as a similar length sailboat.  The main interior salon is joined to the rear exterior seating area with a sliding glass patio door, which is left open to create a single connected living space.  In the main salon are two refrigerators, an oven, range, double sink, navigation station and a table and seating for six people.

After clearing the harbor and channel we put up the main sail and head sail, but there wasn’t a lot of wind so we motor-sailed to our first stop, which was a sheltered area on the east side of an island called Ko Phanak.  After a long and difficult fight with the anchor windless where we accidentally dropped the entire 150 feet of chain to the sea bottom and had to haul it back up, we got properly anchored and went for a spin in the dingy to explore the shoreline, which was a vertical limestone cliff with a nice beach tucked into it.  We were not the only ones enjoying this fine spot; three tourist boats full of people and inflatable kayaks were monopolizing the beach and immediate area so we zipped around and waited until the crowd thinned before we drove our dingy up on the beach and explored the area for a while.

We returned to the boat, hauled up anchor and head north towards our anchorage for the night – the Koh Hong island group.  We could see the towering peaks of these three islands from our current location so we sailed at a leisurely pace, and were gobsmacked as we arrived at this magical place.  Everywhere we looked were vertical limestone walls, indented with stalactites and with trees hanging perilously from the rock and their thirsty roots poking out everywhere.  One of the bays had a single limestone mountain shard shooting up out of the water.  It was like a giant upright baseball bat, and looked quite improbable.

We pulled up to the recommended anchorage spot and found two other  boats – a cruising catamaran and some sort of barge that was stacked with kayaks, chairs and other tourist gear, and occupied by several Thai people.  Our anchoring was much smoother this time and once we were sure the hook was well set for the evening we poured a round of drinks and admired the amazing scenery around us.  The water was green in colour, as the charter staff had told us was common in the northern part of the bay, and there was a very fast tidal current, almost like a river, so we did not go in for a swim, but we did get the dingy out to do some exploring.  The five of us in the dingy slowly cruised the shoreline and its limestone walls and found one cave entrance so we cut the motor and paddled into the cavern, getting hung up on rocks several times.  When we reached the end we saw the cave opened up into a cathedral with light from the sky streaming into it.  The only problem was the ground was very muddy and rocky so we did the only thing we could – sent Magnus in to test it.  Well, he jumped off the front of the dingy and sunk nearly to his knee in mud.  He struggled and pulled and was able to retrieve his feet though, sadly, minus his flip flops.  So while he was checking out the interior cave, Ana was sent in with her super sensitive feet to root through the mud in search of the flip flops, which she successfully did after several failed attempts.  Magnus reported the interior cave was not worth the rest of us risking our footwear, so they got back onboard and we paddled out while Ana was busy trying to dig the packed mud from under her toenails.

We continued along our way and found yet another cave entrance, but we could see right through this one to the other side of the island.  We paddled the dingy into the tunnel which opened up into a beautiful, large circular cavern.  After taking a few photos we continued through the tunnel and popped out on the other side of the island, then worked our way around and back to the boat for dinner.

This was to be the first dinner we have cooked for a very long time, so we took our time and prepared a meal of chili marinated grilled chicken, mashed potatoes and lightly dressed garden salad then slowly and leisurely savored our dinner in the outside salon, washed down with several glasses of red wine and some lovely conversation.  By this time, the night sky was full of stars and the moon was on the way up.  Stella was tired out so she retired to her cabin and the rest of us sat up for a while then moved to the front of the boat and laid down on the trampoline netting, which is stretched between the two pontoons at the front of the boat, creating a perfect surface for napping or, in this case, star gazing.  In a moment of inspiration, Magnus shot up, disappeared, then returned a minute later with his high power green laser pointer and treated us to a magnificent laser light show on the mountainside.  His laser is incredibly powerful and he set it to create all sorts of patterns on the mountain.  After the show we all made a solemn oath not to mention anything to Stella about the light show so she wouldn’t feel left out.

Magnus went to bed shortly after that while Ana, Todd and I stayed up for one more drink and discussed the beauty of it all and the unequalled quality of our current situation in life.  As if the day was not yet good enough, we discovered the phosphorescent wonders beneath our boat and, with that, today’s journal has now come full circle.

Posted by Kristofor Olson at 11:25 AM