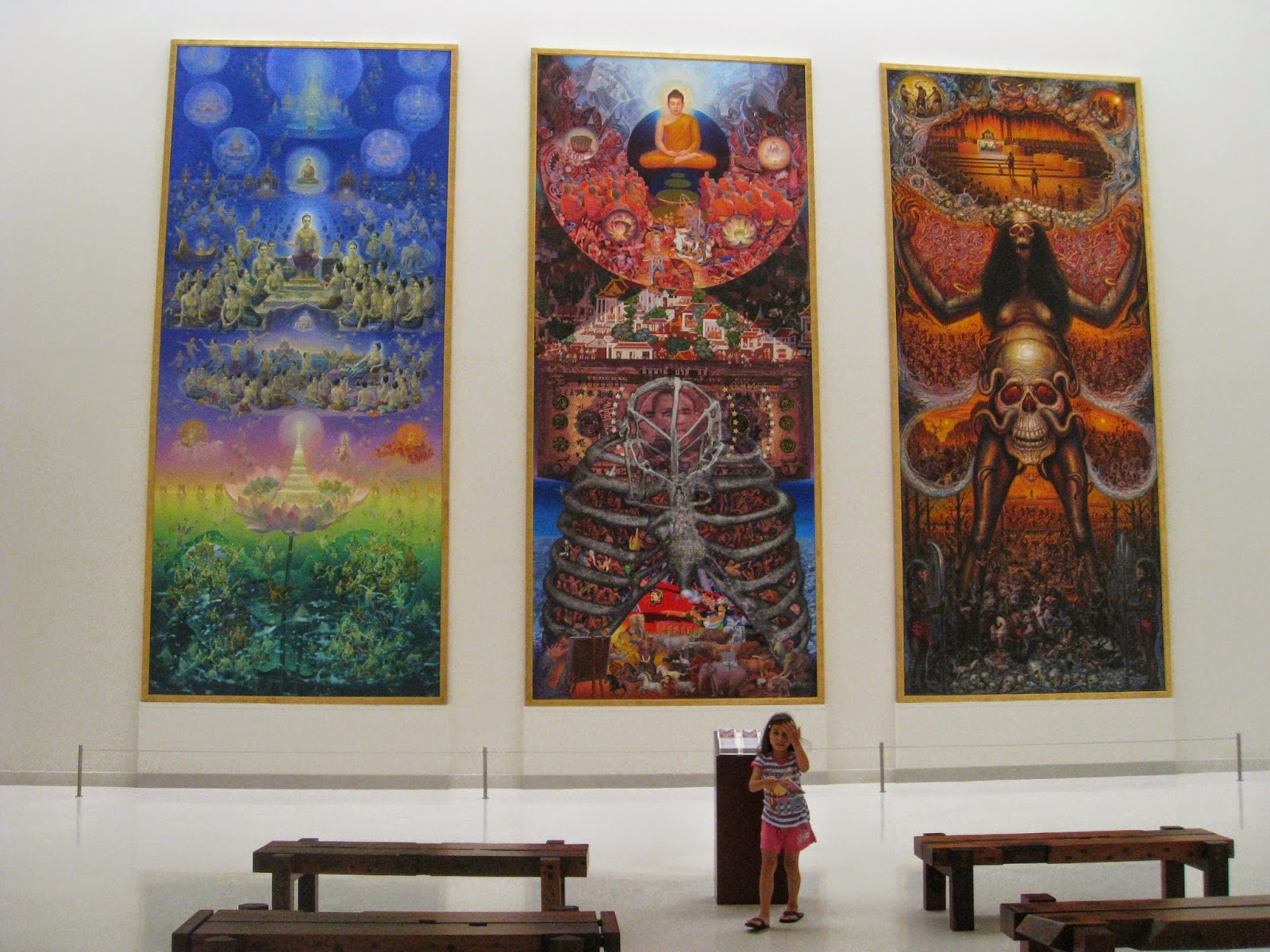 One of the largest open air markets in the world is called Chatuchak and runs on Saturdays and Sundays in Bangkok.  That was our target for this day as we were in shopping mode during these last few days in Asia, looking to pick up some interesting gifts for the folks back home.

But first, we wanted to visit the MOCA, which is the Museum of Contemporary Art and located quite close to the market.  This museum just opened in 2012 and was built by a billionaire Thai man named Boonchai Bencharongkul.  He is an avid art collector and important benefactor for Thai artists.  Not only did he fund the construction of the five level building, but he also filled it with approximately 30% of his art collection, and then donated the whole works to the king of Thailand and its people!

I loved the gallery, as much as any gallery I have visited.  A lot of the works had themes of death and destruction and many were surreal, fantastic and epic representations of fantasy worlds.  Any one of these would have been perfect for the next Mastodon album!  There were also hundreds of sculptures covering many topics and ranging from a full size sculpture of Salvador Dali painting himself in a mirror to wooden carvings to a bizarre collection of half human, half dog creatures lying all over the floor.  Ana didn’t care for these too much and I believe her and Stella actually walked past with their eyes closed while Magnus and I were taking photos.

This was the first serious museum or gallery we have visited during the trip.  Yes, we have been to others, but they just haven’t been in great shape, or were poorly lit, or there were no English translations for any of the works, but usually they were all those things together.  Being able to visit a brand new, professional, serious gallery was quite a treat and I enjoyed it immensely, especially since the art was so damn creepy.

In way of perfect contrast, we took a taxi to the Chatuchak market and its 20,000 vendors and over 200,000 daily visitors.  It is a massive, throbbing, odorous, diverse, flavourful, crowded, gritty collection of every possible sort of item you can imagine.  From a mile away you could practically see the fumes rising from the 35 acre melting pot of merchandise.  Need to buy a sword?  There are thousands to choose from.  You should be able to find a t-shirt you like, there are millions of them hanging from every possible place to hang things.  You could buy textiles, antiques, hardware, Indian headdresses, electronics, art, snakeskin boots, weapons, and even pets.  There was a large open cage with a dozen baby bunnies, all dressed up in clothes.  There were vendors doing magic tricks.  Hungry?  Food stalls were everywhere, selling everything you could imagine, from roasted frogs to chicken biryani to burgers and shakes (papaya shakes, of course).

We rummaged through the chaos for several hours and when we couldn’t take it anymore, we headed to the exit, feeling dirty, sweaty and tired, but triumphantly holding a bag crammed with deals.  We took the Skytrain back to the hotel, had a chill down session for an hour or two, then headed back out to Chinatown to meet some friends.  Ana had received an email from the lovely French family we met back in Myanmar and they were passing through Bangkok on their way back home, and invited us to meet them for dinner.

We met them at Texas Suki, a nifty Chinese restaurant, and had a lovely meal, a couple drinks and a great chat about our mutual adventures over the weeks since we last met.  It was so nice meeting up with people we knew, and they are such a great family.  The restaurant had a big kids play area, so we let the apes go wild while we had a visit, and around 11pm we realized the restaurant was dark and there was nobody left besides a cook and two waitresses, who were patiently waiting for us to leave so they could go home!  So we rounded up our sweaty children went for a short walk together around Chinatown, then parted ways for the second, but almost certainly not final time, as I am positive we will meet again.
Posted by Kristofor Olson at 11:05 AM