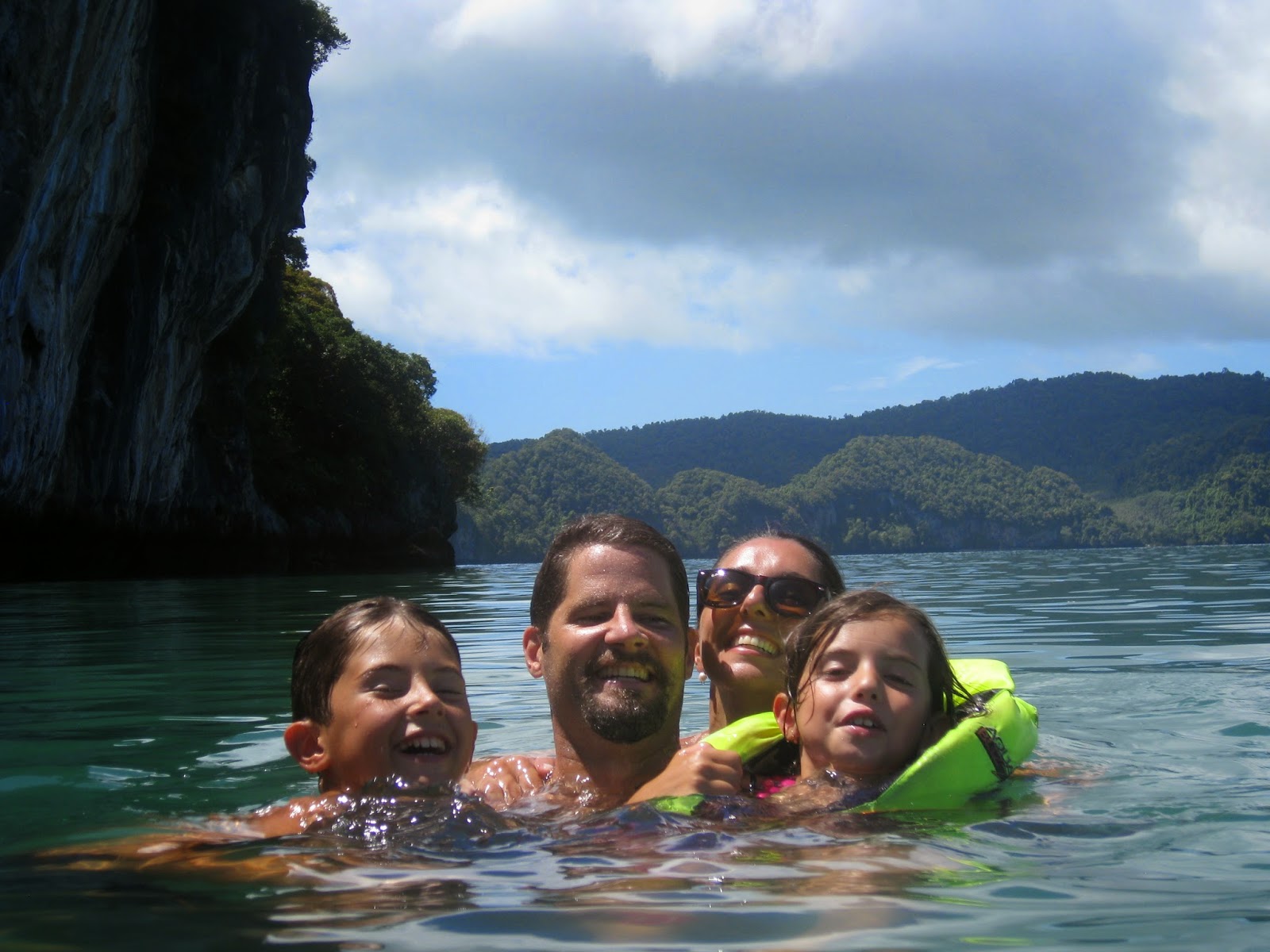 Waking up in the perfect anchorage on a perfect morning was a lovely way to start the day.  I slept like a rock and did not wake up until 5:45 in the morning.  I peeked out our cabin window and was relieved to see that we seemed to still be anchored in the same spot as last night.  I expected I might not sleep too well, anxious that our anchor would let loose, but I must have consumed a sufficient quantity of alcohol to dull the anxiety.

I put the kettle on the stove and went to the back deck to find Toddy already up, sitting at the helm station, enjoying the beauty of the morning.  We exchanged nods then jumped in the water for a morning swim and refreshing underwater piss, and maybe more, carried away briskly by the strong current.  The outside grill on the boat had a flat cooking surface, perfect for scrambled eggs and the best toast substitute we could come up with – fried bread.  We enjoyed this, along with some fresh fruit while the kids had breakfast cereal, but considering our surroundings, we could have eaten pretty much anything and it would have tasted fantastic.

We pulled up anchor and headed north, navigating our way through the dozens of islands in the bay.  It was a lovely, calm day with only a slight breeze, so we initially motored without the sails.  We got our fishing rods rigged up and trolled two lines behind the boat as we cruised over the glassy water at four knots.  Magnus had a terrific strike and started winding furiously, but we soon discovered he had snagged a fishing net, so we spun the boat around and were actually able to retrieve the lure, then got back to sailing.  There were an abundance of flying fish this morning so we played “spot the fish” for a very long time and saw some terrific aerial displays.  The only time there weren’t any fish flying around was when one of us was standing at the front of the boat with a camera trying to catch a video.  At those moments, all was silent.

We sailed to an island called Koh Roi and found ourselves all alone so we dropped anchor, hopped in the dingy and drove to the secluded beach to explore.  Though it was beautiful, we didn’t find much of interest so we went back to the boat and did some experimentation to find the best location from which to fling oneself from the catamaran to get maximum air and best splash.  Ana caught some amazing photos of us leaping in, with a backdrop of limestone cliffs and emerald green water.

We looked at the charts and found a nearby island called Koh Kudu Yai that would be perfect for lunch.  The charts indicated a shallow entrance, but since it was at mid tide I thought we could probably squeeze in, and we did with just a minor bump on the keel.  What we found was a completely secluded bay, encased by limestone cliffs unbroken only by a perfect beach, and room for only one boat (us!)  The water was only five feet deep so I was able to walk in with the camera and get some lovely shots of the rest of the gang on the back of the boat eating lunch.

We decided to head out to do some sailing as by this time the wind had picked up so we squeaked out of our perfect bay, got the sails up and sailed down the length of Koh Yao Noi island.  We were able to get up to 6.5 knots under a 14 knot breeze, which was pretty good, but not quite as fast as I was expecting on a cat.  The experience of sailing on a cat was quite different than that of a sailboat.  It is much harder to feel what is going on with the wind on a catamaran and it seems less responsive to slight changes in sail trim, though this very well could have been because of my inexperience with this type of vessel.  Also, it simply doesn’t feel like you are moving as fast as you are.  When we are on our sailboat traveling at 6 knots in a 14 knot wind it feels like we are flying.  Perhaps the sense of speed is accentuated by the heeling of a monohull sailboat, or maybe it’s simply because this cat is just so much bigger than what we are used to.  In either case, being able to sail fast without the heeling of the boat is a pleasure I could easily get used to.

We checked out a potential anchorage on Koh Yao Noi island but as the wind had now shifted more to the south it was now a windy shore and not practical for anchoring, so we headed east to a nearby island called, strangely, Koh Hong Island - same name as the previous night’s anchorage.  I double checked the charts and crusing guide and confirmed that it was indeed the correct name.  What we found was a perfect sheltered bay with two beaches and a narrow tunnel in the rock leading to an interior island lagoon.  Best of all, there were two mooring balls so we tied up to one, making it the easiest anchoring yet.  Mooring balls are large floating spheres permanently anchored to the bottom with a giant rock or piece of concrete.  There is a line attached to the mooring ball which you simply pick up with your boat hook then place on a cleat at the front of your boat.  All done, and not risk of your anchor pulling loose.

We went for a cooling swim, did a bit of fishing, then loaded ourselves in the dingy to go and check out the lagoon.  We motored over to the opening, then slowly motored through the tall stone walls on either side of us and emerged in a giant, hypnotic, green lagoon with all sorts of amazing rock formations hanging around the edges and, in a couple spots, openings to caves, both at the water surface and also higher up on the cliffs.  We did an entire shoreline circuit in the dingy, testing out caves, looking for fish, and snaking through the mangrove trees which were in the northeastern part of the bay.  As we moved towards the western edge, we found a large rock formation hanging in the air, with room to maneuver the dingy directly beneath it.  I had a vision for the perfect photograph, so told Toddy to get ready to jump up on the rock as soon as the dingy was in position.  I slowly approached the structure and at the exact right moment, he made a confident move to mount the rock.  The initial grasp was good, the lift was shaky, then as the dingy started to slip beneath him, he slowly began tipping backwards and reached for the only thing that could potentially save him – Stella!  But, in an instant, there were four bare feet in the air, synchronized yelps, and then a giant, synchronized splash.  They both emerged from the silky green waters unharmed, and were immediately reloaded into the dingy.  Later, recounting the episode, Toddy claimed Stella pushed him in.  She just smiled innocently.

On the way back to the boat, we pulled the dingy into the beach to have a look around.  Ana walked to the far end and discovered steps leading up to a large cave entrance.  As she was standing there peering into the darkness, a figure suddenly stepped out of the cave, and smiled down at her.  It was a Thai fellow wearing a headlamp, seemingly standing guard.  Above him was a sign saying, “Warning – Swallows Nesting” so we assumed he was either the guardian of the swallows or maybe raiding the nests for eggs.  Later, after we returned to the boat, we saw five men emerge from the cave who were soon met by a longboat who picked them up and took off to parts unknown.  We have no idea what they were doing in there.

Back at the boat we started making dinner while Magnus and Stella fished.  Magnus finally had a strike and caught two fish at the same time!  His lure had six individual hooks on it and found two little hungry black fish, though not quite large enough to keep so we threw them back in.
After another superior boat dinner, all five of us moved to the bow of the boat and got settled comfortably on the trampoline net for the evening light show.  Magnus produced the green laser and started tracing it over the mountainside, then came up with a game where he would write a word and we would have to guess it.  Seems his mountain laser penmanship is just as mediocre as the paper and pencil method so we didn’t get too many of the words, but it still was a lot of fun.

With that, we capped off another magnificent day on the water.
Posted by Kristofor Olson at 11:44 AM