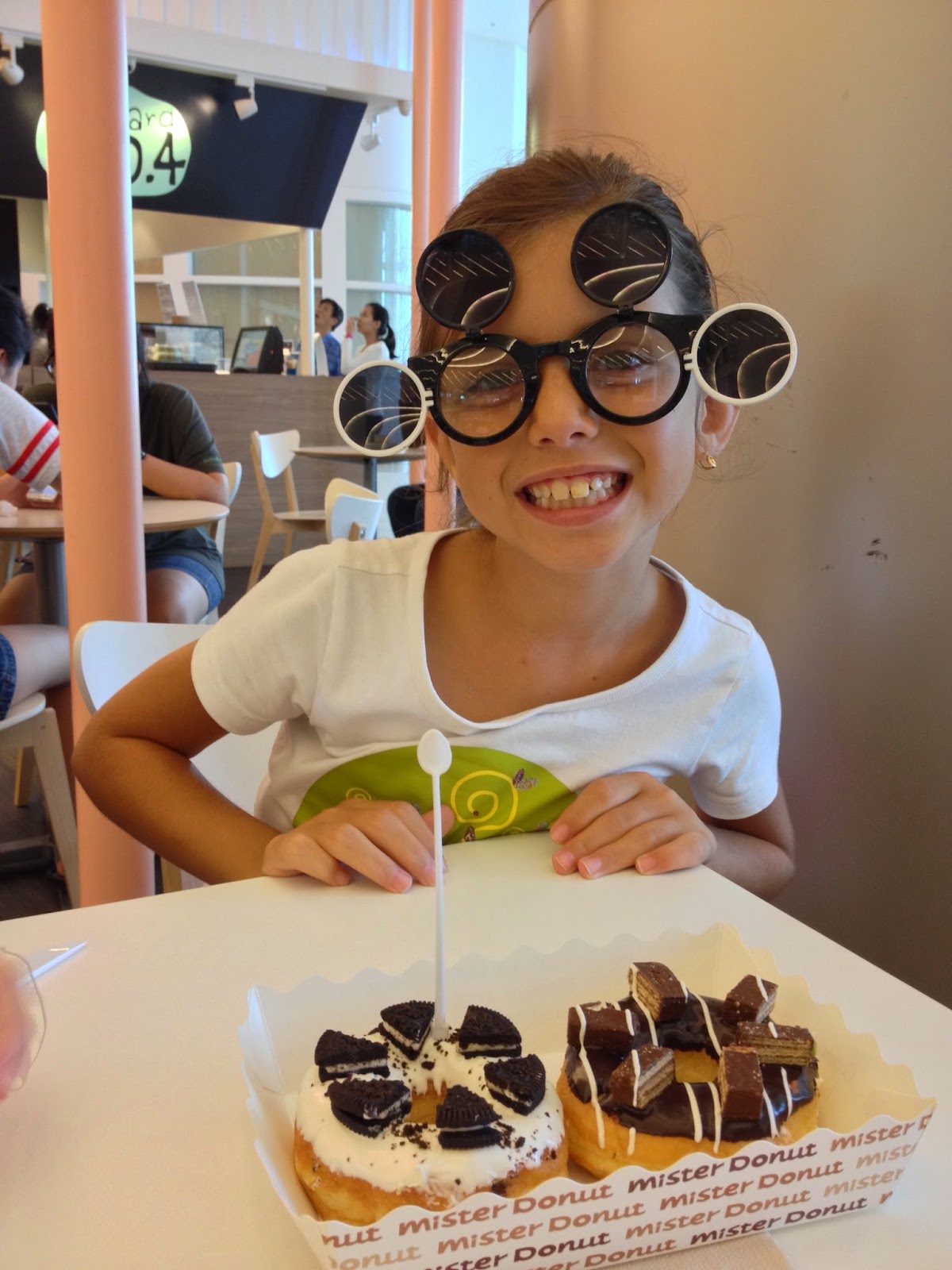 My sweet daughter Stella turned eight years old today!  So the plan for the day was really up to her, and what she wanted to do was to see the Teenage Mutant Ninja Turtles movie.  So after she woke up to a hotel room decorated with balloons and Happy Birthday messages, she opened her presents and got hugs from everybody.  We then went down for breakfast then walked to the Skytrain and rode to the shopping behemoth known as the Siam Paragon and picked up tickets for the 15:50 show that afternoon at the Paragon Cineplex.

That meant we had about five hours to fill.  Our initial idea was to go to this place called Kidzania in the interim, but when we got there we found out it was very expensive and is really meant to be a full day activity.  And it took us about an hour to find the damn place as it was expertly hidden in a practically inaccessible location of the mall.  So then we followed some signs to the lowest level of the mall which housed Siam Ocean World, an enormous aquarium eclipsed only by the enormous entry fee – enough to cover another month of backpacking Southeast Asia.  The next option was to simply wander the Paragon and check out the shops.  But after passing several car dealerships – Rolls Royce, Maserati, Lotus, Lamborghini and Aston Martin, I realized I didn’t have the budget to support this retail environment.

So then we tried to find another shopping place we had heard about called MBK and we ended up wandering outside in the heat for a while and found a few places, but not that one.  By this time we were all getting cranky, irritable, and generally annoyed so in times like that all you can do is eat.  We tried to find a restaurant outside of the malls (as I refused to go back in), but could only find food carts.  So I relented and we went back in the Paragon and the family pack had lunch at McDonalds while I picked up a grab bag of local food, including these nice looking sausage balls that had a hidden cache of garlic that completely polluted me and would leave me reeking of garlic for three days.

Though I’ve often lectured the kids on never using the term “kill some time” it seemed in this scenario that is exactly what we needed to do.  So we made a concerted effort to find the MBK mall and we finally did and were able to hang out there until movie time.

When we entered the movie complex there was this horrible, high pitched screaming sound and we really had no idea what it was.  But as we neared the main area and the sound grew, in fact so loud that I had to physically cover my ears, we ran into a massive throng of young Thai girls and realized there was some sort of band getting ready to play and the girls were going wild.  Now Thai girls have an extremely high pitched voice when just talking normally, so imagine the piercing sonic assault of two thousand of these neon beauties screaming at a boy band.

We got out of there as fast as we could and into the movie theatre.  Stella loved the movie and the rest of us liked it too (yes the plot was riddled with holes, but it was what it was) and after we returned to the hotel for a little break before going out for her birthday dinner.  But after a couple hours we realized everybody was out of gas, so instead we had a backpacker dinner, watched another movie and chilled out in the room.

It was not the most exciting birthday for her, mainly due to our lackluster planning, but it was just that kind of day.  We told her we’d take them to Kidzania the following day so that could be part of her birthday celebration, and she was pretty happy with that.
Posted by Kristofor Olson at 8:38 PM