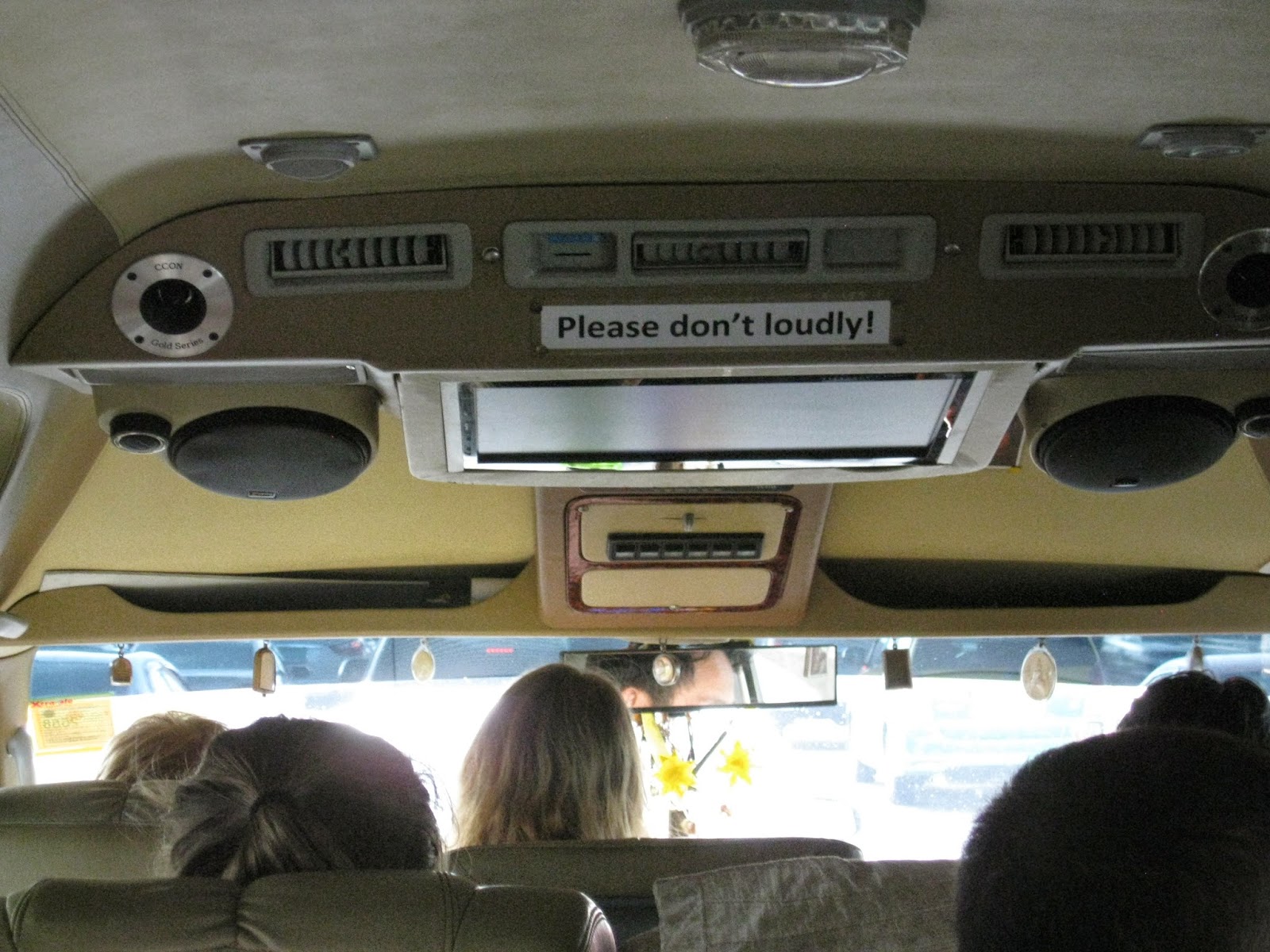 Everyone tries their best with English, but most of the time in non English speaking countries the translations you see on signs, restaurant menus, brochures, and so on are pretty bad.  During one leg of our trip when we were traveling from Siem Reap to Bangkok, we were crammed into a small bus with a whole bunch of other backpackers, all in various stages of The Journey.  At the front of the bus appeared a sign with the message, “PLEASE DON’T LOUDLY!”

I must have stared at that sign for two hours, trying to comprehend the enormity of those three words.  Was it the product of a simpleton with a limited command of English?  Was it a simple error by the sign-maker?  Perhaps some sort of joke by a cunning linguist somewhere in the region?  I think not.  I believe these must have been the words of an old, wise, nearly enlightened Buddhist monk, located somewhere in the region, probably living by himself in a temple atop a magnificent mountain.  It surely took years of solitary meditation to come up with these simple, profound, powerful words and he uttered them only once, to some intrepid, determined, curious follower who climbed the mountain, searching for a shred of wisdom from the solitary master.  What this follower received was a sermon for the world, but especially for travelers when finding themselves in close proximity to others.

The magic of these words is that you can stick pretty much any verb you can think of in there (eat, snore, chew, hum, talk, fart) and it provides the only advice you need when you find yourself in a group situation of any type.  Excepting, of course, for situations of civil disobedience such as football riots or metal concerts.  And moments of intense lovemaking.  It’s good to do those things loudly.  In fact, better.

Other brutalizations of English we’ve seen along the way are not nearly so profound and are simply funny.  Now I’m not the kind of guy who looks at these things and says, “Ha, ha, look how stupid these guys are.”  Not at all.  English is probably the second, third or fourth language for people in the region who speak it, making many of the travelers, who speak only one or two languages, look like the idiots.  But I do have an eye for humour and some of the signs you see are just hilarious.

In the market the other day a watch vendor had a sign on his table which said:

Well thank god I didn’t end up with a FAKE FAKE WATCHE – you just can’t trust that sort of quality.  But I bet they are real cheap.

At the Tiger Cave Temple in Krabi there was a huge, professional billboard there with pictures of monks and mainly Thai writing, but also some English translations.  Though I stared at it for several minutes the translation was so bad I just could not understand what the hell it was trying to say.  Can you figure it out? 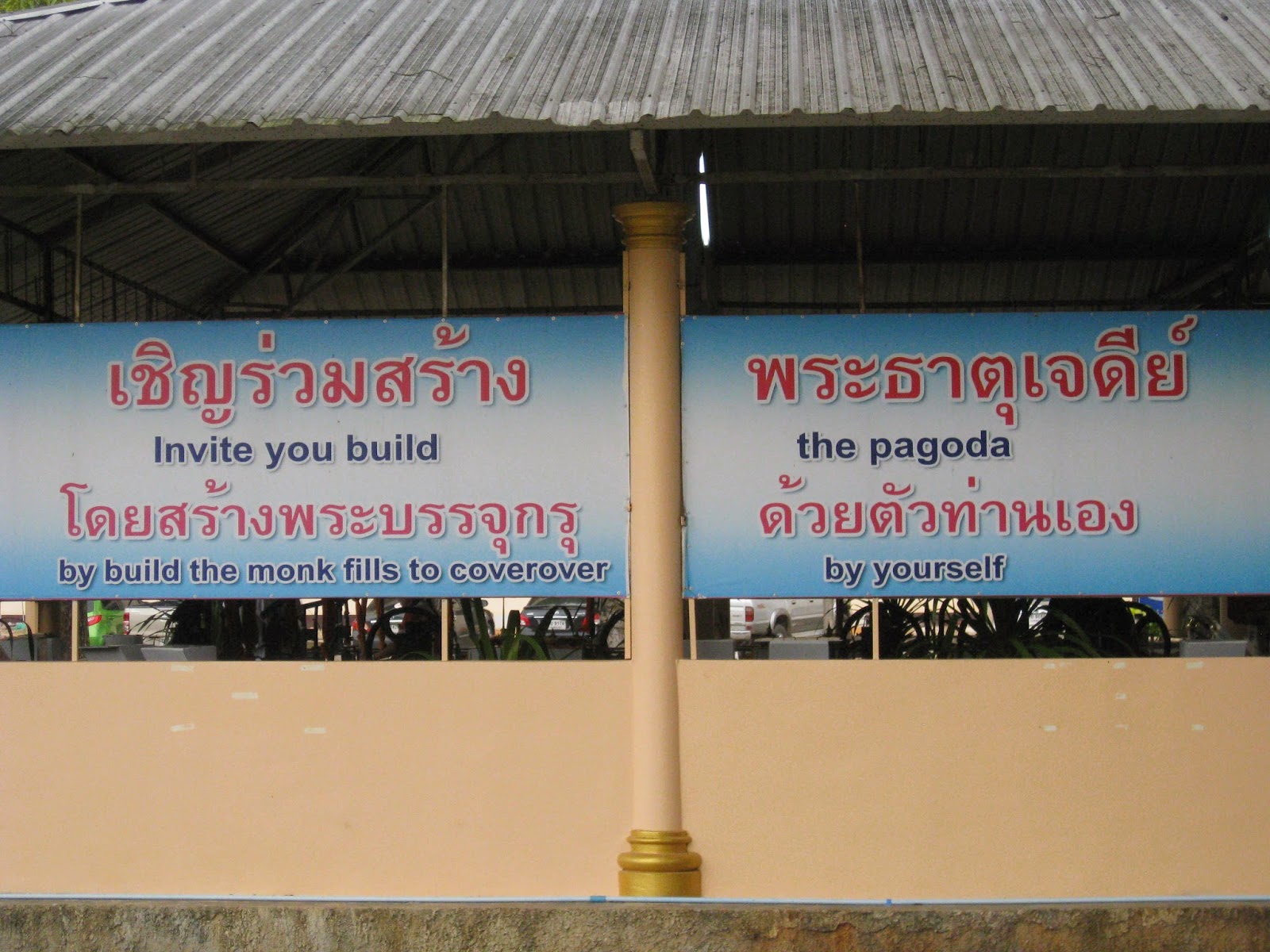 At the same temple, there was this completely out of place whale skull with a very odd sign below it.  And I had always assumed monks were probably trustworthy. 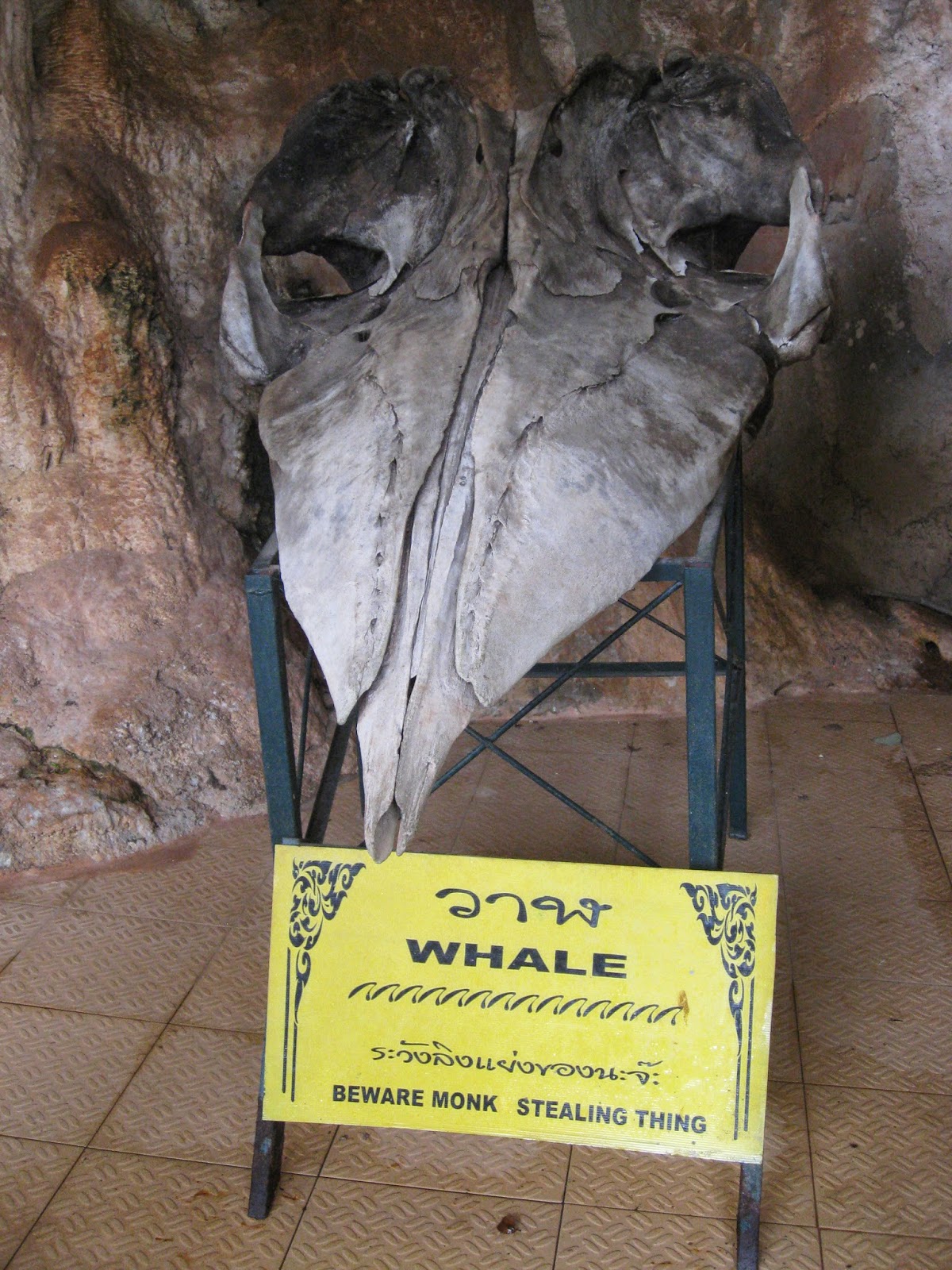 This day we drove back to our original landing place in Phuket – Bangtao and checked back into the Arinara hotel.  This was the first hotel of the trip we have come back to a second time as we really enjoyed it here the first time, and the kids loved the huge pool and waterslide.  We spent a few hours at the pool then went for dinner at a nearby place called The Blue Garden which is run by a French family and served up fantastic meals, in fact, some of the best food we’ve had yet in Thailand.  And with a full belly, we were soon to bed.
Posted by Kristofor Olson at 2:02 PM