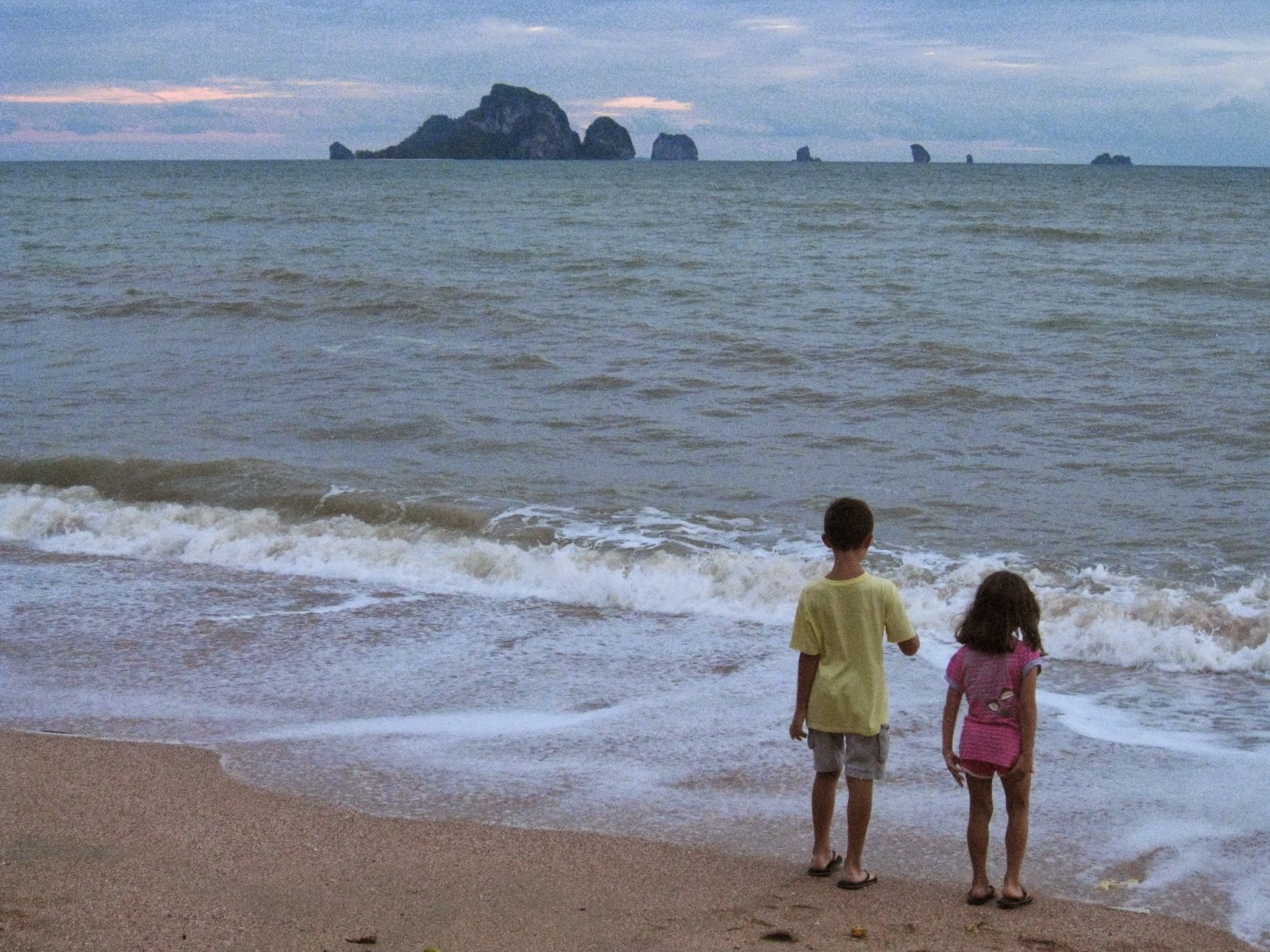 We enjoyed our last breakfast in Khao Lak, packed up in the car and headed south towards Krabi, the centre of one of the most popular beach areas in Thailand.  We drove for a while on a fantastic highway then the road started to narrow and soon we were into the mountains.  The mountains here are the towering, cylindrical limestone ones you often see in the photos of Thailand and are majestic and amazing to see.  The road narrowed considerably and wound through a never ending series of switchbacks, working its way up a steep incline with heavy jungle on both sides of us, trying its best to reclaim the road.  Once in a while there would be a slight break in the jungle growth and we could get a quick view to the neighbouring mountains.  We soon crested the mountain and found a clearing with a small Buddhist temple and a lookout point, but there was a lot of construction happening and a dozen workers so we decided not to stop and began the long, curvy descent.  As we neared the bottom of the mountain we saw a rest stop and small parking lot, behind which was a giant bold Buddha statue in the rocks and what looked like an entrance into a cave.  I cranked the car over and the kids decided to stay in the car while Ana and I had a look.  We walked into the cave (followed by a pack of hungry looking stray dogs), which opened up into a park that was surrounded by vertical cliffs, jungle and many Buddha statues.  The most incredible thing was we were the only ones there, save for the dog pack that followed us around the park hoping for a handout.  We walked around the mossy rock paths, took a few photos, still amazed that here was nobody there, then returned to the car and continued along the highway, which had again widened and got busier the closer we got to Krabi.

After a few bad turns, we eventually found our way to our hotel on Noppharat Thara Beach, which is west of Krabi Town - the main city of the area.  Though Krabi town is the epicenter of tourist activity, there are many beaches and villages in the surrounding area, all of which are dense with hotels and tourist infrastructure.  After checking in we went for a walk on the beach and found it to be littered with natural and human debris, mucky, rough, and generally not very nice at all.  The concrete promenade on the beach was broken and destroyed and the trees all had their roots exposed, making it look like a large portion of the beach had simply been washed away.  Was this damage from the Tsunami?  That seemed unlikely as it was so long ago, but it was hard to know.  In any case, this certainly wasn’t what we were expecting from Krabi.  Most of the shops and restaurants were closed for the season but we did find one pizza place that served up a decent lunch.  We returned to the hotel, had a little break, then went out walking once again, but this time in an easterly direction to see if we could find a better beach.  Well, we sure did – Ao Nang Beach was clean, beautiful, and exactly what we were expecting to find in Krabi.  The coastal road was bursting with activity so after playing around on the beach for a while and enjoying the sunset, we walked down the street, checking out the shops and dozens of restaurant menus.  The original plan for a backpacker dinner in our hotel room (typically instant Tom Yum noodle soup, Ritz crackers, lychees, canned tuna and Pocky Sticks) was shelved and instead we found a nice little Thai restaurant and enjoyed drinks and dinner as we watched the many tourists passing by.

After dinner we continued wandering up the street and it went for a very, very long ways.  One thing we have noticed here is the lack of overt sleaziness that we saw in Chiang Mai.  Once during our walk there was a street leading behind the main road that looked to have some bars with an awful lot of red lights, so perhaps that’s where the late night shenanigans occur, but besides that, it all felt and looked very clean and family focused.  The majority of tourists seem to be couples, families with a few backpackers showing up here and there, but not many.  There has only been about a dozen or so sightings of those MC Hammer clown pants, so looks like all the hard core backpackers have left Thailand for the touristos and focused on the cheaper surrounding countries.

We did see one Muslim family who put on quite a show.  The group consisted of the dad, who was wearing jeans and a red t-shirt, a bunch of children, then at least seven women, some dressed in the full hijab with only their eyes showing, and the rest had their full faces showing.  They were moving as a pack down the sidewalk, wandering from side to side and taking up the entire space, so it was hard to get by them.  It’s hard to tell how they were all related, but it started with a commotion between two of the women, presumably his wives.  They started yelling at each other, pointing fingers at each other, then the dad, then the other women, and that escalated into a shoving match.  The other family members pulled them apart and the dad tried making peace.  One of the ladies punched him in the face, screaming violently, then went after one of the women and there was a major scuffle, spilling out onto the busy street.  I think one of them got pushed to the ground and there may have been a few more punches and slaps landed, though it was hard to tell as there was so many of them.  The main instigator then pushed ahead of the group and fired Islamic insults back to the rest of them, screaming at the top of her lungs.  The younger women looked like they were trying to continue walking and ignore what was going on.  The dad, after recovering from the blow, just continued eating his ice cream.  A few of the other women were still in a fighting mood and screaming at each other.  By this time all the vendors and tourists on the entire street had walked out to see what was going on and everybody was looking at them, some laughing and others just rolling their eyes and slipping past them on the sidewalk, trying not to get cuffed.  I told the kids that the Muslim concept of having multiple wives might sound good in theory, but in practice it probably just ends up in a lot of punchfests and smackdowns.

After finding a McDonalds and having coffee and ice cream (McDonalds has the cheapest ice cream cones going – less than fifty cents each), we turned around and began working our way back.  Along the way, we found another street critter – a man holding a monkey and letting tourists take photos with it – but the monkey was not nearly as adorable as the baby lemur so we gave it a miss and continued back to our hotel where we settled in for the night and started kicking around a few ideas for our next destination.
Posted by Kristofor Olson at 9:01 PM