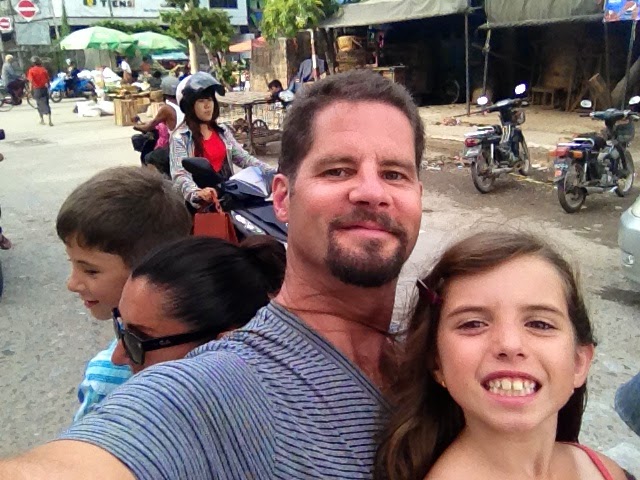 Travel day.  Our driver arrived promptly at 11 am and we took off in a north easterly direction, tracking the enormously wide Irrawaddy river as it winds and bends its way from Mandalay.  This was our first experience traveling through Myanmar during the daytime so we spent a lot of the time simply looking out the window watching the sights.  The roads were generally very bumpy and slow and the fastest our driver ever got going was about 65 kph.  The landscape in this area is dry and nearly desert like, with scrubby brush, lots of tall palm trees and very few planted fields.  At one point we crossed a dry riverbed over a bridge with railway tracks that served trains, vehicles, people and animals.  Fortunately, a giant train did not come through as we were slowly vibrating across in our mini bus.

The trip took about 4.5 hours and went quickly.  On the outskirts of the city our driver pulled over on the side of the road in front of five or six guys who were sitting under a tarp canopy having a smoke.  He wasn’t sure how to get to our hotel so after discussing it with the road dudes for several minutes amidst a lot of finger pointing and confused looks, one of the guys just jumped in our vehicle to show us the way – now that’s service!  Mandalay is the largest city in the north of Myanmar and is one big, congested, dirty, writhing mess of a town.  Our centrally located hotel, though nice, was in the middle of a gritty neighbourhood.  Not dangerous, just gritty.  We left the hotel and began walking south toward the “gold pounding” district where they produce the golf leaf papers which people stick on the Buddha statues.  After a block of open, foul sewers, half paved roads, diesel fumes, sweaty bodies and stray dogs, we were approached by a sinewy, leathered older gentleman on a bicycle which had a side seat for a passenger.  He asked where we were going.  I told him.  He insisted that we jump on his bike and he would give us a ride down for a dollar.  I was intrigued, as there seemed to be only one seat, so I took him up on the challenge and within seconds all four us were piled on the sidecar and his skinny, yet powerful legs were pumping us down the streets of Mandalay.  Busy intersection?  No problem – he made his own path by simply pedaling straight through, not bothering to look left or right, and all the cars, trucks and motorbikes simply went around us.  He was clearly an expert.

We arrived to a gold pounding shop and had a brief tour where we actually got to hold a small gold bar.  This single bar, with many hours of hammering, is then transformed into thousands of thin gold leafs which are then sold to believers who can stick it to the Buddha of their choice.

After leaving the shop without buying anything (the guilt passed very quickly) we remembered we were starving, so we went on a hunt for a restaurant, powered by our very own feet.  The afternoon heat was really cooking up the sewage now so we gagged through four or five blocks of food hunting, though our vision was partially impaired by the sweat running down our brows and the gasoline fumes burning our eyes.  As we were walking along I suddenly felt that little twinge in the stomach which is the first indicator that the suspicious papaya salad I ate approximately 24 hours earlier was not quite up to standard.  Fortunately, we came across a restaurant that looked good and was indoors and air conditioned.  By the time the food arrived my guts were grinding so I was unable to eat any of my food and, in fact, I had to leave the table because even the smell of the food was making me nauseous.  I was done for the day.
Posted by Kristofor Olson at 9:49 PM