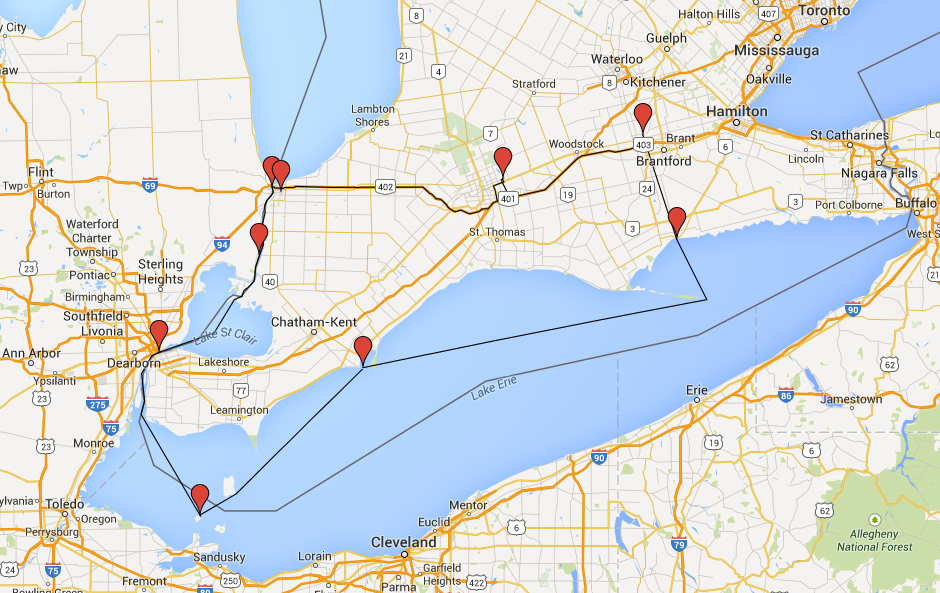 The time has come to part ways with Lake Erie and take on a new Great Lake. This weekend I will be joined by my two brothers and dad and together we will sail Bella Blue from Port Dover all the way to Sarnia, which is at the south end of the mighty Lake Huron.  It is a 260 mile passage and we are hoping to make it in five days.  Actually, we have to make it in five days as that’s when the boys fly out!

Lake Erie has been an incredible sailing ground for us and we have covered many parts of this fine body of water.  Though our favourite boating companion is now living in Kingston, Andrew and his awesome power boat “Endeavour” joined us on several of our epic summer boating vacations.  And trust me, we caused a fair bit of head turning and double-takes when people we met realized that a power boat and sailboat were travel partners.  It just doesn’t happen.  But it suited our contrarian nature just fine and we had a lovely system – the Olson family would glide out of guest marina at 4am and start our slow, steady course for the next destination, usually 30 or 40 miles, sometimes more, sometimes less.  At around 10am Andrew would come racing up behind us at top speed, then slow down just at the right time and pull up beside us so we could enjoy a coffee (okay, beer.) and a swim.  Then he would power on to the destination, get our slips organized and paid for, meet the locals, arrange dinner plans, but most importantly, get the AC pumping on his boat until there were icicles hanging off the ceiling.  We would arrive several hours later all hot, sweaty and exhausted, and he would be there to catch our lines and help us tie up.  After that, sweet AC and a couple of nice cold beers (okay, more like 10).  What a routine!

This season we will be taking on a whole new challenge in the form of Lake Huron.  Now this lake is massive, and much, much deeper and colder than Lake Erie so I expect we will miss the feeling of leaping off the cockpit arch of Bella Blue into gorgeous 30 degree water on those hot July days.  Yes, we will still be leaping off the boat into Lake Huron, but I expect there will be more icy screams of pain and less elapsed swim times.

The past couple weeks have been all about boat maintenance.  Since we didn’t put her in the water last year because of our big backpacking trip, she needed some extra TLC.  Cleaning, scrubbing, sanding, painting, waxing, buffing, repairing, restaining, refinishing, recalibrating are all words we have been using frequently.  We actually put her in the water last weekend and spent two nights there and it was awesome.  This boat looks even better than it did the day we bought it five years ago.  We take good care of her.

My dad arrives today and Marty and Curtis both arrive tomorrow and we plan to cast off around 8pm tomorrow night.  We have a few small jobs left to do tomorrow, such as putting up a radar reflector and new windex, which involves climbing the mast, something we have never done.  But I think my uncle Mark may be coming down to see us off so I’m going to pump him full of wine and see if he will do it – he becomes more susceptible to the power of suggestion under the influence.  But if he won’t do it I’m sure my dad will, he has even less regard for safety than Mark does.

During this trip we will also be celebrating my brother Marty’s 40th birthday, which was actually in February, but he’s so lame he didn’t get around to planning a party.  So I gave him supreme crapola and vowed to do a proper birthday pageant for him during the sailing trip.  We’re planning on giving him the birthday bumps on the boat after ten shots of Akavit then tossing him into the lake, then maybe hanging him upside down from one of the spreaders and whacking him piñata style with colourful yet deadly pool noodles.  Don’t tell him, I want it to be a surprise.

This will be the first time the four of us have had a significant amount of time to hang out together for, I dunno, maybe ten years?  The last time was probably a spring fishing trip in Saskatchewan, which also involves boats, lakes, copious amounts of alcohol and danger at every turn.  It’s what men like to do.