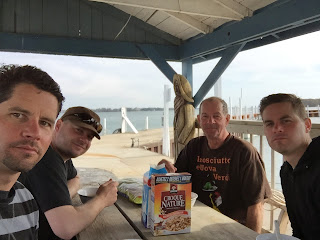 As we watched Erieau disappear into the distance I gave the crew a briefing on our projected route.  We would take a south-west heading and pass across the open lake then through the commercial shipping channel, across the US border and then into the islands of western Lake Erie.  By this time the boys had familiarized themselves with the electronic navigation equipment and had all taken a couple turns at the helm, getting a feel for the wind and the functioning of the lines and sails.  Yes, they were becoming sailors.

With Curtis looking fresh from his power nap and Marty somehow looking equally alert, Dad and I decided to head down for a sleep.  Bella Blue has two closed cabins – a queen sized berth at the back of the boat, right beside the engine compartment which houses the 29 HP diesel.  The other cabin is called the “V-berth” and is located at the front.  The rear bed is especially good while underway as the running engine keeps it warm and generates a lovely, monotonous white noise.  Dad grabbed this cabin and as far as I know he was asleep in seconds.  I jumped in the V-berth, fully clothed as it was very chilly, expecting to fall asleep instantly.  But the trick with the front cabin is that you can hear everything happening above on deck, and the sounds are amplified.  Every wave splashing against the side of the boat sounds like a tsunami.  Slight wind gusts feel like a tornado bearing down on the boat.  And all the creaks and groans of the mast, head sail furler and lines make it sound as if the boat is about to split apart at any moment.  So I lay there, trying to go to sleep, but quite sure the boys in the cockpit were in terrible trouble and the boat was about to go down, or maybe be slammed by a freighter.  Of course I knew everything was fine but just couldn’t shake it, so I tried my best for an hour, then finally gave up and went outside to check up on things.  As expected, the lads were doing just fine so with mind at ease, I went back down and sleep came instantly.

I awoke hours later to the deafening sound of a horn and a terrible crashing as the Bella Blue piled into the side of a freighter.  The boat was instantly pulverized, and the four of us and the mangled wreckage was forced down beneath the water by the mighty bulk of the ship.  All of us somehow managed to escape from the sinking ship, just in time to avoid being dragged to our watery graves at the bottom of the lake.  At least that’s what happened in my dream.  When I woke up for real it was Marty batting at me with a leather glove saying, “Wake up shithead, time for your shift.”
Before taking over control of the boat I whipped up a stupendous coffee with the ultra-cool coffee system Curtis brought along.  As a prairie hipster and coffee connoisseur of the toppest notch, I had put him in charge of crew caffeination, and he did not let us down.  The system consisted of two parts.  First was a manual grinder where you poured whole beans into a metal capsule then did about 300 revolutions on the detachable hand crank to grind them up.  Second was a French press where you inserted a thin filter then dumped in the coffee and poured in a cup’s worth of boiling water.  The resulting beverage was spectacular.

The boys went to sleep and I took over the helm.  It was another cool, yet beautiful night, and the wind had picked up to a level where I was able to cut the engine and go with sail power only.  I did not immediately wake up Dad, choosing instead to do some solo sailing for a while and enjoy the solitude of the overnight crossing.  The moon was at its fullest this night and the resulting sky show was mesmerizing as the moon was completely encircled by clouds and the beams punctured through them and extended down to disappear into the lake and light the way for the fishes and turtles.
After a while Dad woke up, geared up, coffee’d up and joined me in the cockpit.  We enjoyed the breaking of the dawn as we passed into US territory and could make out our destination in the distance. We had yet another feathered visitor who trailed the boat for a while then landed on one of the railings in the cockpit and had a rest.   We couldn’t cajole him into sitting in our hands, but he did seem quite content with the railing and even had a little snooze.

We passed to the south of the tiny Middle Island – the southernmost point in Canada and populated only by a massive colony of cormorants.  During the Prohibition years in the US this island was owned by a gangster who used it as a base for rum running.  He even built a nice clubhouse, a brothel and a runway so his buddies could come out to party.

We arrived in Put-in-Bay and pulled up to the gas dock at the Boardwalk restaurant/bar/marina.  While the attendant was filling up the diesel and pumping out the holding tank we walked over to the main office and checked ourselves in with immigration.  This is an interesting time to visit Put-in-Bay as it was still very early in the season – there were only a few places were open and just a handful of people walking around.  Arriving here on a holiday weekend during the peak of the summer is completely different as the small island is heaving with tourists, boats and golf carts, and ferries are constantly shuttling people to and from the other nearby locations such as Kelley’s Island, Pelee Island and Sandusky.  There are eight marinas with hundreds of boat slips available and dozens of bars and restaurants.  With the clear, clean water and the many attractions you would be forgiven for thinking you had just arrived in the Caribbean.

We took Bella Blue over to Miller’s Marina and grabbed our favourite slip, which was pretty easy as we were the only boat there.  As we were getting tied up we saw two Lake Erie water snakes (found only on these small islands) slithering through the water and Dad tried to catch one with a stick but the serpent was too quick for him and quickly disappeared beneath the dock.  As a result of our second consecutive overnight run we were all feeling a little ragged so we had a quick nap, then got showered up and walked into town

We stopped at one of the shops selling tourist kitsch then moved onto something more interesting – the liquor store – and stocked up on beer and wine.  We even grabbed a round of Buzz Balls, which are these horrible drinks made of 50% alcohol and 50% sugar and they always have a huge icy tank with a hundred of these things floating around in there.  How can you say no?

We went for lunch/dinner at the bar that actually had a few people inside and had a decent enough meal and many cheap, cold beers served in plastic cups.  Put-in-Bay is the kind of place where they have built the drinking establishments to withstand the heartiest of partiers – no sharp edges, plastic bottles for condiments, bouncy wood floors, televisions well out of reach, trough styled urinals in the washroom and single use plates and cups.  In fact, the only thing you could possibly use as a weapon in the midst of a drunken melee is a dinner fork, which was actually constructed of metal.  And I’m sure there have been more than a few fork stabbings here.  Actually, now that I think about it, the bar was reminiscent of most small town Saskatchewan town bars.

It had somehow turned from day to night as we sat chatting, laughing and drinking so we decided to return to the boat.  Beside the boat slip was a nifty gazebo with a few picnic tables beneath it so we set up shop with our wine and beer and Marty’s brand new Bose sound system and continued our festivities, but now to the sweet sounds of heavy metal.  Marty whipped out a package of Red Man chewing tobacco he had picked up in town and we all had a dip.  I hadn’t enjoyed that particular tobacco product for many years and had lost the ability to isolate the generous volumes of tobacco juice being produced in my mouth from the beer being poured into it, and as a result ended up swallowing most of the foul liquid and gagging every few seconds.  But Marty was doing it too so I didn't feel too bad.

We relocated to Bella Blue’s cabin and cracked out the spectacular board game Settlers of Catan.  Marty had some initial luck with his dice rolls and cards and quickly established a stronghold and looked to be on his way to winning.  So we ganged up on him.  He complained that we were ganging up on him, which we all forcefully denied, then ganged up on him again until he was cornered.  It was Curtis’ first time playing the game so we threw the game and let him win.  We are such nice guys.

Posted by Kristofor Olson at 6:12 AM