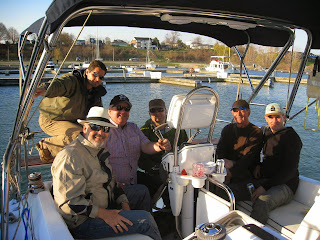 I woke up at 6am anxious and hungry - anxious to get the final load of gear ready for the sailing trip and hungry for adventure.  Actually, I was hungry for Honey Nut Cheerios and a peanut butter toast.  I knew the adventure part would come later.

My father-in-law John arrived at 9 and Dad and I jammed our gear and selves into his pickup and headed for Port Dover.  Ana and the kids stayed home as they had to drive to London airport later in the day to pick up Marty and Curtis and then shuttle them to the boat.

We spent the first couple of hours doing maintenance tasks like replacing the cockpit speakers, cleaning the boat, inflating the dingy, filling the water tank and then packed all our gear into the boat nice and tight.  Sensing the presence of beer nearby, we broke out the sneakers and marched pedestrian style into downtown Dover, but before we could settle on a venue my phone rang – it was my uncles Mark and Michael calling from their El Camino looking to get a read on our current position.  Awesome!

They pulled up in what was not an El Camino, but at least they were both wearing really cool hats, clean shirts and Mark even sported a fine Hemingway beard.  Seems the Lumbersexual revolution is even catching on with the Boomer crowd.   We settled into Two Eleven Main – one of the newest additions to the Port Dover restaurant scene – and hit the brews and food.  Since Mark was driving he was taking it easy on the drinks, which was a bit of a problem as I had been planning on getting him drunk and sending him up Bella Blue’s 50 foot mast to replace the wind vane.

We drove back to the marina and were presented by Michael with four giant sealers that contained pickles, stewed tomatoes, hot peppers and blueberry sauce - yet another of his and Anna’s ongoing food experiments, and a most welcome addition to our store of provisions.  Missing from the payload was a giant slab of smoked bacon that somehow ended up in Mark’s fridge as he had assured Michael that we wouldn’t possibly have enough room for it on the boat.  He has always been a very thoughtful and selfless man.

We enjoyed a couple more drinks, and then shoved off for a creek cruise, which would eventually lead to the big marina where we could fill up with diesel and wait for the rest of the gang to arrive.  I pulled the boat up to the gas dock and was surprised to see our friends Tony and Angela standing there waving!  They helped us to dock the boat then we had a quick visit while the marina staff filled up the fuel tank.  Tony is an avid pilot and told us to watch for him the following day at noon as he was planning on bombing us with a bag of his dog Zoe’s poo.  But I’ve seen him play Bocce ball and his aim is terrible so I wasn’t overly worried.

With a tank full of diesel we motored over to an empty slip on dock one and were met by some of our old dock buddies who helped us tie up.  The beer drinking continued in the cockpit of Bella Blue, but it wasn’t long before the rest of the crew was walking up the dock with gear in hand and smiles on faces.  I first thought Curtis had brought along a block of parmesan cheese, as we all caught a whiff of it, but we soon learned that the lady seated beside him on the plan had puked and his jacket had caught some spray.  Marty smelled just fine.

After a short visit and a boat briefing for the crew (Ana gave them the low down on boat fender protocol) we said our goodbyes and were off.  The wind was quite strong, but at a nice angle so we pulled both the main and jib sails out, shut off the engine and were sailing!

A little background on the crew.  Dad is the most experienced sailor as he owned his own sailboat and did some pirating in Saskatchewan.  He mainly sacked villages on Lake Diefenbaker, but I think he also did some spring raiding on some of the feeder rivers and creeks.  He tired of that after a few years as the booty was limited to low value barley and wheat which was hardly worth the effort.  Sometimes he made off with a few used tractor parts, but it’s pretty tough to write good pirating ballads based on that.

Marty is the next most experienced.  He was in a sailboat once – with me actually, in my first sailboat which I owned in the Bahamas.  We did a day trip that started out pretty good, but by the end of that day we lost half our crew (Marty included) to a rogue dingy driver, crashed the sailboat into coral and had to be dragged off by shirtless Bahamians in a motorboat, smashed the keel into a giant rock, ran out of beer, experience total battery failure and couldn’t start the boat, got stuck on a sandbank, had to be rescued twice by Bahamas Air and Sea Rescue, and had the outboard motor fly off the dingy and sink to the bottom of the ocean.  Statistically speaking, I think somebody should have died so we actually made out pretty good.  I actually can’t believe Marty is going on a boat with me again.

As far as I know Curtis has never been on a sailboat, but has been on all other sorts of water vessels such as fishing boats, paddle boards, windsurfers, dingys, speedboats, pontoon boats, and I think he may have floated drunk on a tube down a raging river one time.  He’s a fast learner so he should be fine.

We sailed towards Long Point under a strong, but slowly weakening wind.  Ana, the kids and I have done a similar route many times in the past, and every time we’ve had our butts handed to us after rounding Long Point as this is where it opens up into the major expanse of the lake.  The normal conditions are swirling winds, four foot waves, chop, bluster, confusion and uncertainly.  So I started prepping the boys with statements like, “It’s going to get nasty soon”, “Enjoy this ride now because you won’t later”, “Anybody want a sea sickness pill” and “Tie yourselves to something if you need to lean over the boat to vomit”.  Imagine my surprise when we rounded Long Point and found unnaturally calm conditions and within a few miles the lake had turned to glass and the moon was full and lighting our way under a cloudless sky.  The scene before us was mind-bendingly beautiful and Bella Blue’s engine hummed hypnotically, gliding us through the still waters with nothing else in sight besides the synchronized blinking of the red lights coming from the hundreds of wind turbines on the Canadian shore.  By this time Dad and Marty had gone down for a sleep and it was just Curtis and I in the cockpit.

“I never imagined we would have lake conditions like this,“ I said to Curtis.  “I didn’t even know it was possible for this lake to get calm.

That’s funny,” Curt said, “this is exactly how I pictured the crossing!”
Posted by Kristofor Olson at 4:15 PM