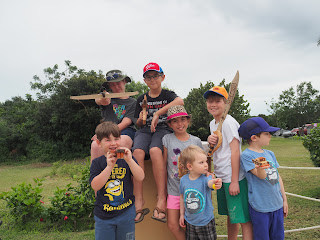 The final day of Walking Club was totally overcast, windy as hell and spitting a bit but that wasn't enough to stop us. Mards, Jen, Leif, William, Dad and I were the participants and we had a lovely stroll along the wind swept beach with ocean whitecaps as far as the eye could see. It was reported that William actually slept in until 7am – a personal record I believe.

It's funny how you can never really run out of things to talk about when on a walk. And it's been said that a long walk can solve anything. I believe that.

The one thing that is hard to tire of at an all-inclusive resort is breakfast. Yes, the lunches and dinners have the potential to get tiresome, but somehow that first meal of the day is always anticipated and enjoyed, especially when taken slowly. So we enjoyed our last breakfast together as a group, gave our waiter one final quality tip and then went for a long walk around the nearly deserted side of the resort that few of us had explored yet. For some reason the hotel had an entire section of nearly a dozen buildings that seemed to not be in use, and we explored all of them. There was even a giant pool filled with water, but due to the absence of a stocked and staffed bar it attracted few patrons.

We continued into a building that was a mirror image of the main lobby, except that it was completely deserted. The funny thing was that it was still set with tables and chairs, ashtrays, cushions, and pretty much everything apart from people. So we did what any normal group of humans would do and rearranged four chairs to serve as goalposts and created an impromptu soccer pitch. The game was on, and the only rule was that we had to let Lukas give the ball a kick every couple minutes. The match was spectacular, and a real nail biter right up until the final seconds when Ethan and Magnus threaded their way through the defenders and gracefully slid the ball right past the goal keeper. Goal!

We wandered back to the rooms and somehow Magnus reprogrammed our safe with a new code and then promptly forgot the code. So Ana put the call into the customer service line and they said there would be a technician coming in "un ratito" which, in Spanish, basically means it could be a couple minutes or several hours, or perhaps never. I volunteered to stay behind and wait while Ana and the kids joined some of the others in a final trip to the Pueblo. I'm much better at lying on a bed reading a book than browsing shops so it worked out very fine indeed, and the technician didn't show up for two hours so I actually got my first bit of substantial reading done on the trip.

I arrived at the pool restaurant just in time for lunch and found a whole tray of these little miniature octopus babies that everyone else managed to pass by. Well, the kids were mesmerized by these purple beauties and each of them came by my plate to poke and prod at my meal, but none were brave enough for a taste test so I got to enjoy them all myself.

A lot of people have trouble with the food in Cuba, and looking around today I saw the perfect picture of why this is. Despite dozens of fresh salads, fresh vegetables, seafood, and stews, there was a line-up of twenty people behind the single buffet tray that held French fries. So I guess it comes down to this: if you are not willing to give new foods a shot, if you refuse to eat seafood, and if you are used to eating French fries and double cheeseburgers five times a week in Canada, then you are probably not going to like the food in Cuba. Fortunately, none of our group fit into that category and I can't remember anybody having trouble finding something they liked.

We did the shift to the pool and relaxed there for what seemed like hours. I spent a lot of time chatting with Curt about the topics we usually cover – investing, business, electric cars and housing. And I finally had a breakthrough moment with Lukas after all my hard work to cozy up to him this week. Curt had brought back two nice big beers for us, which he put on the ground and then left to go to the can. I called Lukas over and he actually sat with me on my chair, which was a first in itself. We sat for a few minutes and then I noticed a big, meaty, green booger doing that slip and slide thing in his right nostril. So I put my thumb and forefinger on his nose in Farmer Hanky position and told him to blow. Sure enough, that booger shot right out onto my finger. I then made sure he was watching and flicked it toward the ground then said, "Look Lukas, I just flicked that nasty booger into your dad's beer! Don't tell him." His face lit up with the biggest and most mischievous smile I've ever seen. We were now partners in crime.

After a chill out session back at the rooms we soon found ourselves enjoying our last cocktails at the lobby bar. Magnus celebrated by spilling another drink on the bar, but thankfully the rest of us kept our beverages contained.

We arrived at the Cuban a la carte for 7pm and they got our entire group seated at a single table, right next to the "buffet fighters" from the previous night. The food selections were interesting. One of the appetizers was a meat filled potato and the other was something that was, in Spanish, called a "fried grandma". Surprisingly, the fried grandma beat the meaty potato hands down.

Angie had come up with an idea for the final night. She and Ana gathered some slips of paper and on them wrote things like, "Tell us one time grandpa spent some special time with you" and "Tell us one interesting thing grandpa gave to you" and "Tell us a time grandpa played a trick on you". So we each had a turn to recount a fond memory of Dad in honour of his 65th birthday, and it was not hard thinking of examples. Dad has always been the most positive, accessible, easy going, hard working and genuine person you could imagine and we all love him so much.

We finished off the meal with some super sweet, Cuban-style rice pudding and then returned to our rooms to finish preparing for the next morning's early departure at 5:30 am. Most of the Saskatoon crew came by our room and we said our goodbyes after a fun filled week. For me, it had been such a great opportunity to get to know those members of my family that we don’t see frequently. And seeing all of our children get along so well, and have so much fun together was a real pleasure.
Posted by Kristofor Olson at 5:31 PM