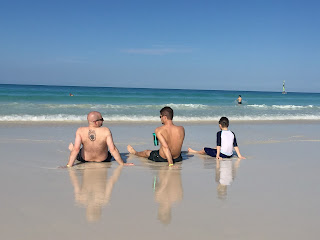 The alarm rang at 3:00 am and we began to move. We had decided to stay at a hotel near the Toronto Pearson airport and met Marty, Jen, Leif and William here the previous evening. Our flight to Santa Clara, Cuba was scheduled for 6:15 which meant that by midday we would be enjoying the pleasures of the Caribbean courtesy of the fine Cuban folks at the Starfish all inclusive resort on the island of Cayo Santa Maria in Cuba. After several months of research and planning this was the destination chosen as the location to celebrate my dad's 65 birthday. There would be 17 of us in total. The Saskatoon contingent included my dad Peter, step-mom Loretta and her daughter Angie and grandson Ethan, brother Curtis and his wife Carrie and kids Eliot and Lukas and finally Mary Ann, who is the mother of my brother's Marty's wife. Team Ontario included my brother Marty, his wife Jen and kids Leif and William and my family Ana, Magnus and Stella. Because we live so far apart the cousins rarely get to be all together at once so we had been anticipating this trip for months.


After checking out of the hotel, packing our densely packed bags in the vehicles, scraping ice off the windshield, driving to the Skyway parking lot, a short transfer to the airport and a relatively smooth check-in process, we were at the gate awaiting the call to board. It is amazing how easy and affordable it is for a family to go on a mid winter getaway from Canada.  Back when we were kids the idea of taking a yearly airplane trip was unheard of, so I consider ourselves to be extremely fortunate.

Soon we were on the plane, in the air, at cruising altitude, and sometime after that wee William was sleeping so hard he was actually snoring!

The plane arrived on time and we were met with that familiar, moist, heavenly Caribbean air as we departed our aircraft. There were several planes arriving so the line at Immigration was fairly long and slow, but we eventually made it through, got our bags and found our bus to the resort, which was a ninety minute drive. Luckily they had a nice big cooler full of beer for the ride.

Our tour guide for the ride was knowledgeable, personable, spoke excellent English, and was very fast at serving beer. He even gave us a health tip for the week – get plenty of vitamin R. Before we had a chance to ask what that was, he told us…Rum!

Ana and I have a technique we've developed over the years for these sorts of cattle herd, touristy situations and once again it worked flawlessly.  As soon as the bus stopped, Marty and I (seated near the front of the bus) fled, leaving Ana and Jen with all the kids and gear while we raced to the reception counter and secured the first spot in line. Soon, Ana and Jen arrived to take over and we returned to grab our gear and keep the kids entertained while they got us our room keys, which did not take long.

That initial walk from the hotel lobby, wearing jeans and sweaters, hauling bags and coats, blinded by the sunshine is the most glorious part of the trip. You know you have an entire week of free food and drinks with nothing other to do than goof around and relax, and that within ten minutes you'll be in a swim suit, wearing sunglasses, carrying floaty toys and soaking up the sweet sunrays.  And that's exactly what happened!

We wandered over to the restaurant and had a big lunch, complete with sangria and dessert. Everyone seemed to enjoy the food, but were anxious to get to the beach so we finished up and were soon in the ocean, body surfing in the perfect waves and playing in the fine, golden sand. The beach on Cayo Santa Maria is one of the best we've seen. It is groomed every day by employees of the various resorts so stays impeccably clean. The ocean bottom drops very gradually, making it perfect for the young kids to splash around and swim. And the water temperature is perfect, like a cool summer bath. After a couple of hours we transitioned to the pool, where the kids continued to blow off energy while the adults enjoyed the sun on the pool loungers, interrupted only by frequent visits to the bar for refills.

We packed up our gear and walked over to the lobby for the late afternoon arrival of the rest of our substantial party – the Saskatoon Team! After a flurry of hugs, kisses, high five's, low five's and five's on the side, we helped our companions to their rooms. We were all placed in the same building and after a couple of room shifts everybody was happy with their homes for the week so we proceeded to the main event of the day, known as "dinner".


We had a long, slow dinner, which gave us time to get reacquainted with each other, especially the kids. Everybody was looking good, and in great spirits, except little Lukas who had picked up a slight bug and Dad who was just in the final stages of a cold, but that never gets him down. Lukas and Dad have special relationship. Every time Lukas gets a cold he likes to cozy up to Dad, wait for a big sneeze and then explode it all over Dad's face, which inevitably results in Dad getting sick. And Lukas has a habit of getting sick every time Curt and Carrie take a vacation. We often refer to Lukas as "INFECTED".

This resort featured nightly entertainment and this night was the beach party. We walked down to the beach for 8:30 to find an elaborate setup including two giant tv screens, a massive sound system, and a Cuban clown who seemed to be intoxicated, which made him extra funny, at least to the kids. The only time adults really enjoy clowns is when they get smoked in a horror movie.

After the kiddie clown show, the adult party really got going. A fire breather twirled flaming batons and shot flames from his mouth. The bar was serving up highly concentrated rum drinks. The music was pumping. There were two extremely drunk girls doing their best to stand up. There was a drinking game which involved chugging a beer, spinning 360's and then running towards a beach chair, but most participants did a face plant into the sand before completing the course. During this time Eliot was doing high speed races to the waves, where he would dip his feet, and then come running back. He did this three hundred times. At some point the danger factor reached critical levels so we returned to the rooms.  Day one complete.
Posted by Kristofor Olson at 6:39 AM