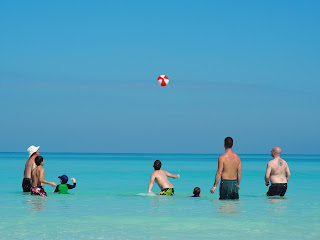 Like normal life, there is an element of routine when staying at all-inclusive resorts. We had decided the previous evening that the perfect way to begin each day was with a beach walk, so with this was christened the Walking Club. Attendance would be optional, but encouraged, and all participants would be expected to meet at 7:30 on the beach near the water sports shack. When I arrived, Dad was already there, swatting at his legs, which were getting bitten by some sort of invisible creatures. We started the walk and soon ran into Angie who was out doing some beach combing so we continued west on the never-ending beach and enjoyed the inaugural hour long walk which was a great way to clear the head, get some exercise and trade tales.


Nearly the entire group assembled for breakfast and we claimed a table for 17 which, after giving the server a sizeable tip, would become our personal table, reserved for us each morning. During breakfast we learned that Carrie had been hit with a bad stomach bug the previous evening and was going to wait it out back at the room. Dad was on the way to recovery from his cold and Lukas had this constant green mini-slug that would peek out of one nostril, then get snorted back up, then peek out the other nostril, and be similarly re-inhaled. This game of tag continued until Curtis was finally able to deftly capture the green critter with his Hipster Hanky, and vanquish it to the pocket of his shorts.

The breakfast was excellent.  Besides the standard eggs, bacon, bread and juices the buffet had many other interesting items. Blood sausage, stewed chickpeas, spicy red cocktail wieners, fried green peppers, hot dogs wrapped in fatty bacon, papaya, guava, star fruits and a large selection of pastries. Ethan brought back a platter of two hundred slices of bacon for the team to share, which seemed insurmountable at the time, but somehow we managed to eat it all.

After this gigantic feed we all headed for the beach. It was already hot and sunny, nearly windless, and the ocean was perfect with many hues of blue, a calm surface and smaller waves, with the occasional wave large enough to body surf. We set up a perimeter of beach chairs and established base camp. This included water toys, 20 varieties of sunscreen, towels, books, magazines, water bottles, snacks, refillable beer glasses, hats, and Dad's Bose wireless speaker broadcasting an iPhone full of Bob Marley masterpieces.

With all the kids and adults now in the water, Magnus and Ethan decided it was time for chicken fights, so we all paired up and the fight was on. Eliot was on grandpa's shoulders and was having a lovely time pushing the other kids down, getting pushed, and splashing around. But at some point it all became a become a bit much, or perhaps too violent, and he roared, "I don't want to chicken fight NO MORE!!" which brought us down in laughter, and also brought the chicken fights to a close, thankfully before one of Olson boys blew out their dodgy back.

Several of the kids brought snorkelling gear so they spent some time exploring the ocean, even though there was not a lot to see as that perfect beach extended itself far into the ocean and there were no reefs, grass patches or much else to attract a lot of fish. Loretta did spot a single skinny, extremely fast, long-nosed fished that we unsuccessfully attempted to corral and capture.

Soon, our stomachs (stretched by the breakfast feeding) were ready for more so we broke camp and left for the pool restaurant where we again found a 17 seat table and were awarded it as our own personal lunch spot after serving up a generous tip to our fine waiter. The lunch was excellent, and we were joined by a dozen birds that cruised around the restaurant with impunity. After Stella reported losing a French fry to one of the flying bandits we watched our plates more closely.

The advantage of lunching at the pool restaurant instead of the main buffet was, of course, the proximity of the pool and the poolside bar. The men and boys got settled into the pool while the ladies went on a shopping excursion to what is known as the "Pueblo" – a fabricated Cuban village completely void of anything remotely Cuban or village-like. It is basically a distraction for the tourists in the surrounding resorts and a fine way to separate them from some of their Cuban Convertible Pesos. It consists of tourist shops, tourist restaurants, a cigar bar, dozens of vendors selling Cuban handicrafts, a small park and, of all things, a bowling alley.

In the middle of the pool was a cave structure so we led all the kids over there to check it out. Dad did continuous circles around the structure towing one, two or several of his grandchildren along behind him, much to their entertainment. Several of us sat down at the underwater seats around the bar to enjoy a few drinks. The boys drank Cristal beer and the kids had Mickey Mouse drinks which looked to be Sprite with a healthy shot of red, sugary grenadine. Eliot and Dad swam over to us at the bar there were no seats left. Beside us, though, were several seats occupied by members of a bridal party, evidenced by their "Friend of Bride" hats. Eliot sneaked over and got a portion of his butt cheek on one girl's chair, so that they were sharing it, which she thought was cute. He pushed over a bit to claim more chair space, which she begrudgingly gave up. Then he pushed her a bit more, and a bit more, and finally she plopped down into the water and his coup was complete, so he ordered up a Mickey Mouse to celebrate! That boy is going to do well in life.

As the sun was at full power, we found some seats in the shade to show some mercy to our pasty white, though reddening skin. At this point Carrie finally appeared, looking healthy, and reported that she was over the worst of whatever it is that she had knocked her out.  Maybe it was the transition from -30 C in Saskatoon to +30 C in Cuba.

There was a group of young men near us and one of them had what look like two black nylons with stuffing at the end. He was swinging and twirling them around in all sorts of cool geometric patterns. Marty told me that they are called "poi" and used by fire performers as you can actually dip them in fuel and light them up. Ethan went over to have a closer look and soon he had the poi in his hands and was twirling them like a pro! Perhaps a career in the circus?

Once the ladies returned from the Pueblo we went back to the rooms to get ready for dinner. Life at an all-inclusive resort centers on meals, and you get used to it real quick. Our morning table was already taken so we found another with enough seats and tucked into another big meal. We had discovered that practically every guest at this resort was Canadian, with maybe half from Quebec and half from the rest of the country. Most of the other resorts we have stayed at have a far more diverse set of visitors, usually from Germany, Spain, France, the UK, Russia and Central America. This is probably because the newest operator of this resort is a Canadian company and has been able to keep it full with flights from Canada.

Towards the end of dinner I presented Dad with a gift for his 65th birthday – a two dollar, fluffy blue adult bib that we tied around him and let him go crazy on the plate of shrimp which were previously causing major staining on his nice shirt. He had told us there was a "no presents" policy on this trip (as the gathering itself was the present), but my legendary generosity got the better of me.

For dessert, besides the pastries, fruit and cake, they also had these giant 750 ml tubs of strawberry ice cream. In normal life, this would be enough to supply a dinner party but in this situation people took them for single-serve portions, which was pretty gruesome, especially considering the strawberry flavour was reminiscent of those horrible strawberry marshmallows they used to feed to kids before society learned they were carcinogenic and disgusting. Nonetheless, every second person carried their own personal bucket of ice cream out of the buffet and back to their rooms to enjoy. Ethan even managed to nearly consume a whole bucket, though by the end his body went crooked and he took on this odd zombie-like stare and basically looked possessed so Angie took him back to the room before his head started spinning around.

We waddled out of the buffet and went to the lobby bar for cocktails. As William was showing off one of his many tricks and doing the full splits on the floor with his hands in a serene prayer position, we noticed his face was giving off this hypnotic red glow – clear evidence of a glorious sunburn. Mary Ann dubbed him “El Scorcho” and he would retain this nickname for the remainder of the trip.

After a few wobbly pops in the lobby we moved en masse to the front of the theatre where an amazing Cuban band was ripping it up with horns, bongos, guitars, drums and amazing singers. My sweet little Stella got scooped up by her grandpa and they did the cha cha cha with her smiling and laughing the whole time. I had a great dance with Mary Ann and then I grabbed Ana and we hit the floor and cut some rugs. As bad as I am at dancing, I love dancing with my girl and she never says no.

By this time most of us had dropped off so we left for our room and thus ended another day.
Posted by Kristofor Olson at 4:58 PM