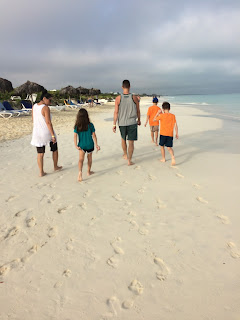 The Walking Club left on time and this day we headed east on the beach under a slightly overcast sky that created a beautiful, morning light. Marty brought a Frisbee so we threw it up and down the beach which added some sprinting to the morning exercise regime. The kids wanted to know what the holes in the sand were so Dad told them it was from crabs so we tried in vain to dig one out but they tunnelled too deep and our Frisbee/shovel just couldn't go down that far. We found a lovely set of sandcastles that somebody must have made the previous day; they included a mermaid, a shell, an underground temple, a Star Wars star destroyer and a perfectly formed pyramid. We also found three live starfish that we watched intently for several minutes just to make sure they were actually moving. To cap off a morning of many sights, on the way back Ana spotted a hawk sitting atop a pole, munching a delicious gecko. Dad was disappointed that he forgot to bring along his new high zoom camera.


We all met up for breakfast and had the standard fare. Curt gave me one of this boiled eggs and it took me 15 minutes to peel the sucker as the shells came off in microscopic pieces. That was the last boiled egg for me. I ate a massive amount of papaya and offered a piece to Marty.

"It's probably because you had it Canada and the ones there are always unripe and taste like a baby's dirty ass," I explained.

"OK, let me try a piece." He ate it and frowned. "That still tastes like a baby's dirty ass.

"Yes, but much less so. That's why it's so much better here."

We moved the Olson Horde down to the beach and reclaimed our favourite spot, though there seemed to be a lot more people around today. Poor little William had blisters on his cheeks so he was instructed by his mom to say these lines to any adult he met that day: Could I please have some sunscreen?

It was a very hot day and we all spent most of the time in the water floating, lounging, snorkelling or simply rolling around in the sand. A few of us were floating together and noticed a dude walking down the beach with a metal detector looking for goodies on the beach and in the water.

"That is my retirement plan," said Ana. "I want to be that guy." I was previously unaware of her scavenging ambitions so I am going to have to start looking around online to buy her some gear so she can start practicing. Maybe she can begin with cast off nickels down at the local park to hone her skills.

Several times during the morning Leif had asked me when we were going to play tennis like I promised. Well I couldn't really remember promising that but I did remember telling him there were tennis courts on the resort, which was as good as a promise to a young eager lad. So I checked out a couple rackets from the sports centre and led a parade of youngsters to play tennis. Today was extremely hot so I was quite sure it wasn't going to last long. As expected, the court was blisteringly hot, but it didn't stop us from smashing the tennis ball around for 45 minutes and all the kids got a crack at it. Curt, Carrie and Lukas also showed up and had a few hits, but soon it was just too hot so we got the gang moving, sticking to the shadowy side of the path, and made our way to the pool restaurant.

We enjoyed an extremely slow and long lunch, in no rush to go anywhere. I was continuing my attempts to get to know Lukas, but he would return each of my advances with the "Lukas cold shoulder". Marty reported he was getting the same treatment so I didn't feel too bad, but I still resolved to become his buddy by the end of the trip. I got a lovely consolation prize when Leif came over and gave me an awesome back scratch – he is the master of that. Actually, several times during the trip we'd be walking in a group and all of a sudden a hand would slide up my back and start scratching away. What a champ!

After lunch everybody went to the Pueblo except Dad, Loretta, Ethan and I who hung out at the pool instead. Dad and I snuck away for a quick cigar and beer in the lobby then returned to the pool and Ethan and I played a fun game of chess on the giant board they had at the sports centre. It wasn't long before the others returned and Stella, Leif and William were all sporting newly purchased trinkets.

Most seasoned all-inclusivers bring along their own drinking vessel as the resort serves drinks in those tiny, plastic disposable cups that probably all end up in the bellies of cute sea turtles. In one way, the cups are good in that by the time you return from the pool bar to your chair you have already drank all the beer so you need to return to the bar, in effect getting double the exercise. But if you're not into exercise (seen the typical Canadian lately?) then what you want is a Big Bubba Mug. These fit about half a bottle of rum and a litre of Coke so can last you for up to an hour and there is no exercise required, unless you have to roll into the pool to take a leak. But today I saw something brand new – the Big Bubba Keg. This sucka was twice the size as the standard model and you needed two hands to lift it once filled with the gallon of beverage of your choice. Somebody noted that the lady carrying it had a physique remarkably similar to the vessel itself so I think she'd been hitting the all-inclusives with some regularity.

After a good swim everybody returned to the rooms for a pre-dinner cool down. During the day Marty and Dad had booked us a half day fishing trip for Wednesday and the ladies had booked us spots at both the seafood and Cuban a-la-carte restaurants so we were all set for the week.

We met up for dinner at the appointed time and it was delicious, though uneventful, at least until the paper airplane battle broke out in the restaurant. I think Magnus constructed the first one with his place mat and tossed it across the table. I folded up a second one and threw it and everybody else jumped in soon after that. Paper airplanes of all varieties and construction standards began to fly, initially restricted to the airspace of our own table. But soon some of our planes were flying into the hair, soup and plates of neighbouring diners so they began constructing their own planes and launching them back. One of them even dipped his plane in shrimp sauce and stuck a few antennae on it which gave it a seriously deadly look. We continued this battle for air supremacy just up until the point where a neighbouring table of boring people who didn't like getting hit with planes were about to come over and punch one of us in the face. Some people have no sense of fun.

Somehow during the epic fighter plan battle William had fallen fast asleep, face down on the table. I must have been a little intoxicated because I offered to carry him, knowing damn well that William is basically a solid chunk of lead powered by rocket fuel. I made it about halfway back then ran out of steam and Marty took a shift. Together we managed to lug him back to the room, then we met most of the gang back at the theatre to see the evening show. Unfortunately, the first two performances were sufficiently lacklustre to drive Magnus and I out the back door and back to the room. I can't tell you what happened after that.
Posted by Kristofor Olson at 5:04 PM