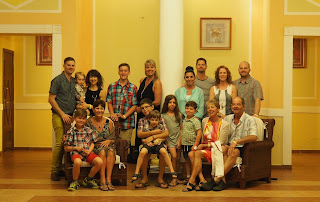 We wake up early, get showered, load up and are in the lobby to check out at 5 am. Dad, of course, is already there, enjoying a coffee and waiting to give us the final send off. Interestingly there is still a leftover group of people from the previous night, partying at the bar. Marty and I look at each other, grimace at the thought, but then remember all the times we were the ones pulling the all-nighters. That makes us smile.

Dad gave each of us a final hug and we then boarded the bus and were soon relaxing in our seats as it meandered down the roads and onto the causeway. The kids all slept the entire way, Marty and I nodded off here and there, and Jen and Ana had a lively discussion the whole way to the airport.

Marty and I pulled the same trick we did at the start of the trip and managed to get to the front of the check-in line, and it was a good thing because there were multiple flights leaving that morning and the line soon stretched right to the back of the airport. We breezed through immigration and claimed a table in the departure lounge which would serve as a base for the two hour wait until boarding time.

By now we were getting hungry so we got out all the remaining snacks (and there were a lot – two kinds of trail mix, pumpkin seeds, chocolate wafers) as well as the large bag of roast beef and cheese sandwiches that Angie and I had made at the buffet the previous evening. Again, we beat the system as everybody else had to stand in line for an hour at the small snack bar that sold lame toasted cheese sandwiches and not much else.

Marty and I went to explore the duty free store and he found a bottle of rum he wanted. The line was long and especially slow moving, and as soon as we reached the front we realized why. They had the slowest credit card machine in the world. I think that when they put the credit card in the machine it sent a small printout of the order to the top of the terminal building where a communications engineer rolled the paper up, attached it to a raven, and sent the bird flying off to Florida to transmit the message. When the raven returned to the rooftop with the authorizing stamp on the bill, the message would be transmitted back down the line and the credit card machine would ring out "Transaction approved!"

We finally boarded the plane and were all seated together. The flight back was great as it went by fast and they served a delicious Montreal smoked meat sandwich for lunch. I also picked up two bottles of Bombay Sapphire gin from the on board duty free so now I'm all set for Canadian summer.

We landed in Toronto, zipped through customs, grabbed our bags, jumped on the shuttle and were back in the Skyway parking lot saying our goodbyes. Marty and the gang had a long ride back to Ottawa and we were going to the Toronto International Boat Show to get some prices for new sails for our boat.