Cuba 2016 - Slow meals, Settlers of Catan and vandalizing the lobby 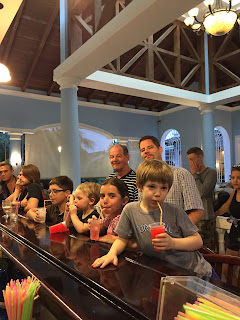 After the busy day yesterday we had decided to plan absolutely nothing today, which was good because I was feeling the effects of those after hours drinks the night before. Even so, I woke up at 7:26 and was down to the beach for Walking Club at 7:30. I was the only one there so I just walked into the ocean and stood there for a while to figure out my next move. Fortunately, Angie, Marty's gang and Dad soon appeared so we went for a nice walk.

Ana had gone to breakfast earlier and tried to sit at our table but the waiter wouldn't let her, saying it was reserved for a group of 17. She finally convinced him she was part of the group of 17 and he allowed access. The rest of us arrived after the walk and we enjoyed another long, slow breakfast. Curt and Carrie told us that Lukas was finally feeling much better and they were thinking he may been having a reaction to the sunscreen as he was constantly rubbing his eyes and face when it was on. I tried cozying up to him but got another cold shoulder, but think I spotted a slight smile. Eliot, on the other hand, was comfortable with us right from the start, which was great, and he is such a friendly and gregarious kid. I don't get to see these nephews too often, which makes it a bit tougher. I do see Leif and William frequently so we are already good buddies.

We went to the pool after breakfast and nearly everybody except me participated in a big pool volleyball game. I just sat silently in my chair with my sunglasses on and tried to stay upright. Marty and his gang went to the beach and took a ride on one of the Hobie Cats as the wind had picked up, providing for a good sailing day.

We had a long, slow lunch at the pool restaurant and then cracked out the Settlers of Catan board game Magnus had brought along. For once, Magnus had bad luck and just couldn't get his numbers to come up so I managed to win, but Curt and Eliot were close behind me. It was Ethan's first game and he caught on fast – I expect him to be dangerous in future encounters.

We of course returned to the pool and enjoyed a slow afternoon, except for William who must have taken his mask on and off a hundred times and was in constant motion in the water. Stella too spent all her time with the boys in the water and Lukas had really latched onto her, like all young kids do. Magnus and Ethan have really hit it off so they have been spending a lot of time together. It's nice to see the cousins all getting along so well.

While the kids were goofing around, Dad and I were doing some serious work and developed a new trick which allows foreigners to double their beer consumption in Cuba. The only Spanish words anybody knows are "Dos cervezas, por favor", which obviously gets you two beers. But with a clever, yet simple rearranging of a few letters, we came up with the new standard phrase. It is "Yo cerveza!  Pour for four." Since most of the Cubans speak at least a little English they almost understand this.  So now you get four beer instead of two.  You are welcome.

After a chill out session at the room we all met at the lobby bar for cocktails. A few of us and the kids were elbowed up to the bar ordering drinks. Lukas got a glass of pinks slushie and almost immediately dumped half of it on the bar, which the bartender quickly cleaned up. Then when the bartender was serving the drinks he dumped an entire gin and tonic all over the bar and half of it splashed on Stella. He apologized profusely, but we assured him she was fine and it was no big deal. We went out to the lobby and got settle in the comfy chairs while Magnus waited for his drink. When he returned to join us a few minutes later he reported that he too had spilled his drink on the bar and most of it had hit the bartender. Then less than five minutes later Lukas hurled a chair cushion onto the table which took out a gin and tonic, a Miami Vice and knocked one of the glasses on the floor which shattered. At that point we decided we had done enough damage in the lobby and continued to the buffet, where our favourite waiter had the table all ready for us.

After dinner most of us went to the theatre foyer to listen to the Cuban band, but I took Magnus back to the room as he wasn't feeling too great and I was tired. Besides, the show for the night was Grease, which, in itself, was an excellent excuse to have an early night.
Posted by Kristofor Olson at 5:19 PM