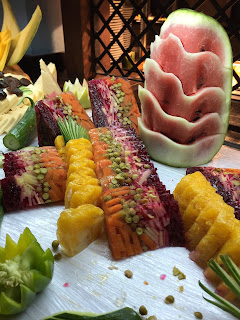 Today was fishing trip day so we were up for an early breakfast in order to meet our departure time of 8am. A cold front had definitely moved in as the sky was overcast, the temperature had dropped and the winds had risen. So we packed a few extra items of clothes in our day bags in case it was cool on the water.

We were in the lobby by 8am waiting along many others who were there for their day trips when one of the staff announced that all water activities had been cancelled for the day because of the weather. Damn! We stood there for a few minutes looking each other, unsure of our next move, then finally decided that our next move should be a second breakfast.

Marty and Dad returned to the lobby for 9am to talk to the Sunwing representative and see if we could book the trip for the next day, but they were told everything was fully booked and there were no other options. So we decided instead for the entire group to take the big double-decker tourist bus to the other, smaller Pueblo which was located to the west a few miles.

Since we had an hour before the next departure we went back to the rooms. Along the way Ana stepped on a giant slug and her flip flop launched the slimy remains up onto her leg. I used some leaves to wipe off the goo and was reminded of Marty's earlier observation that these boneless, meaty slugs must be like chicken fingers for birds. We had another small bit of bad luck when we discovered that all the stuff we had drying on our chairs on the back patio (a towel and three bathing suits, including Ana's favourite) had gone missing overnight so we had another look around the building and in the bushes in case somebody just threw them around for a joke, but no luck.

We boarded the bus on the upper level and after a short, windy, hold onto your hats ride we arrived at the smaller Pueblo. The cool thing about this one was it had a giant pirate ship with a bar inside the hull and a deck you could climb onto, so we took the kids up there to check it out. There was also a high tower that offered excellent views across the island, to the resorts and out to sea. We could see whitecaps across the whole ocean so were a little glad we weren't out there bouncing around in a boat.

The kids bought some souvenirs from the vendors there, including a wooden AK-47 that Magnus simply could not pass up. Curt and Carrie bought a nice piece of original artwork, Ana picked up a flashy ring, and Angie and I each bought a three dollar bottle of flavoured spirits in case we felt like having shots in the hotel rooms.

We returned to our hotel for our Groundhog day lunch at the pool restaurant and played another game of Settlers of Catan. As the day was cooler, around 23 degrees, there wasn't as much pool activity and I think a few of us slipped away for afternoon naps, something that had been strangely absent during this trip. Later in the afternoon the sun peeked out for a while so we got set up on pool chairs and watched the pool show which was a dozen super fit Cuban men and women doing acrobatic tricks and synchronized swimming/diving in the pool. And they watched up unfit folks lying on our pool chairs sucking back free bar. I think they were more jealous than we were.

We went back to the rooms to get ready for dinner and Lukas and Eliot came over to ours for a wrestling extravaganza.  We pushed the beds together, threw Magnus and Stella with them in the ring and let them go for it. This is Eliot and Lukas's specialty and Curtis tells me they can't sit beside each other for 5 minutes before a wrestling match breaks out. Before long, Lukas had Magnus in a magnificent choke hold and was not letting go. But since Magnus was laughing and his face was not turning blue, we let them continue until they were both simply tired out.

We were soon back at the main buffet for dinner and were surprised with some new items on the line. First, they had one giant, regular looking turkey that was being carved and served and another one on the buffet that looked to have been dipped in yogurt. They also had a huge roast beef that was thinly sliced and delicious. Last, there was a full fish that had a similar yogurt coating, though this one was pink and completely tasteless. The strangest new item was a bizarre dish we called, "Jellied Five Layer Leftover". Imagine squares of clear gelatine with five, clearly separated layers of foods you know you have eaten at some point in the previous day or two. What an amazing way to get rid of those discarded beets, corn, peas, onions, and carrots! I didn't actually try any, but I did get Curt to take a photo of this odd creation.

During our long, long dinner I sat with Stella and she told me that she had decided what she wants to save up for. Stella is our family saver and seems to have more cash available at any time than the rest of us put together as she rarely spends any of her allowance. But she had become quite enthralled with Dad's new camera, especially the zoom function and the little display screen that had a swivel. She asked grandpa how much the camera cost and was a little shocked to hear it was nearly a thousand dollars. But we told her we could probably find something a little less fancy for less than that if we shopped around.

Just as we were about to leave the restaurant an altercation broke out at the table close to us. Two ladies were trying to beat each other up but were being held apart by a man holding a small baby. Classy! At one point the mother or mother-in-law got involved too and we were sure there was going to be fisticuffs, but after several minutes there was only shouting, eff-words and frantic finger pointing – no real violence. Bored, we tiptoed around the combatants and skedaddled back to Marty's room for a nightcap while the kids once again got set up in our room with a movie on the laptop.

We crammed a bunch of chairs Marty and Jen's deck, cracked out what booze we could find, and solved a few of the world's problems. Ana brought up a People magazine that she wanted to show Dad, as she found a product ad that might be very relevant for him in his aging condition. They were called Butterfly Pads and the tag line on the ad said, "Discreet protection for accidental bowel leakage". They were basically panty liners for sharts. And considering the state of most people's digestive systems at Cuban all inclusive resorts, I think this company could serve a very motivated market segment by putting these suckers in vending machines outside of all the buffets.

Ana and I returned to our room, got the kids settled and were getting ready for bed when a howl came piercing through the night. Poor Lukas two rooms away was having a major meltdown. In fact, it sounded like his parents were torturing him (or was it maybe the other way around). After a while I went over and knocked on the door to see if they needed any kids Tylenol, handkerchief gags, shots of rum or the like. Curt answered the door all groggy-like and said it was fine; Lukas just wanted to sleep with them but that wasn't allowed so Carrie and he were having a showdown. We found out the next day that Carrie stood her ground and won! I must say, I do not often miss the days of having young kids, but I guess we all have to put in our time.  Makes you tougher.
Posted by Kristofor Olson at 5:26 PM