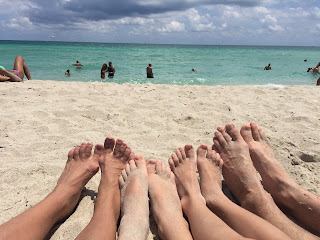 I wake up just as the sun is rising and quietly sneak out of the room for a morning walk. The temperature is lovely and the streets are incredibly quiet as it is Sunday morning and there is nothing open. I walk eastwards down Las Olas, stopping to look through the windows of a few shops and to admire the many boats that are docked in the canals. I always love going for early morning walks when we are visiting a new place as a city or town looks, feels and smells very different when it is just waking up.

I return to the room to find everybody up, showered, dressed and ready to go. Ha, in my dreams! The kids are still sleeping, but Ana does have a towel wrapped around her head which is a sign of some progress. I entertain myself with a magazine and the US news channels while the troops get organized, and before too long we are in the car and following our phone's directions to the nearest Denny's for a quick breakfast stop before continuing onto Miami. The Denny's breakfast is simply horrible, from the cold and stringy hash browns, to the gluey pancakes, to the flimsy coffee, to the tasteless eggs, to the lipstick-stained cups. But it will certainly fill the gap for a while.

We head south on highway 1, taking the slower but more scenic route instead of the major interstate I-95. It is a simply gorgeous day, and we plan on packing in as much as humanly possible. Our first stop is the Wynwood district of Miami, which has become known as the arts hub of south Florida. Previously a run down warehousing district, this area is now packed with art galleries and inhabited by the self proclaimed "creative class" - entrepreneurs, artists, renegades, and hipsters of all shapes and colours. Because it is early Sunday morning though, all the funksters are sleeping off the funky cold medinas and magical herbs consumed the previous night, so we have the whole neighbourhood to ourselves and can explore the amazing graffiti art and murals that decorate nearly every building at our leisure.

The images are huge and mesmerizing. We see a giant seal split in half exposing its spine with blood dripping down the wall. There is a thousand foot train painted on a building which runs alongside an actual train track. There are images of faces everywhere, some recognizable such as Stevie Ray Vaughan and Jimmy Hendrix, and others of people who may just exist in the artist's imagination. We pass by many galleries – all of which are closed – but most of them have art installations right on the street. It is inspiring to see so much life brought back to what was undoubtedly a dead, industrial district not so many years ago.

The next stop on our day trip is to Miami Beach, a series of natural and man-made islands physically separated from Miami by Biscayne Bay but connected by several bridges. It is famous for its pristine beaches, party scene, arts and culture events, LGBT community, Art Deco district, and Crockett and Tubbs racing around on their power boat chasing drug dealers.

As we are driving towards South Beach we come across an outdoor market and stop for a look. There are hundreds of street vendors selling everything from antiques to clothing to knick-knacks to food and drinks so we take our time and wander around browsing through the offerings. As I’m not known as much of a shopper, I soon find three nice wooden antique chairs and sit down with the kids to do some people watching. During the drive here Ana made the mistake of telling Stella she saw a photo of Katy Perry on South Beach the week before. Stella asked excitedly, "So do you think she will still be there?"

"But it's possible, right?"

"Stella, how am I supposed to know where Katy Perry is? I have no idea."

That was good enough for Stella. I could sense her brain working this through and the result was that that she was fully expecting to find Katy Perry, Pitbull, Sia and Bruno Mars doing an impromptu show for us on the beach. Having arrived in South Beach, she keeps asking me where the famous people are. I tell her to just pay attention to all the people walking around and she might get lucky and recognize somebody. So we sit there creeping the crowd and, although we don't notice anybody famous, we do see all sorts of interesting characters, including a homeless dude carrying a sign that reads, "Need money to buy weed". We also see an older gentleman walking by and as he approaches the boulevard he trips on something, loses his footing, and tumbles to the ground, fortunately on top of a bunch of mulch and plants so he doesn't hurt himself. Magnus turns to me and says, "Dad, why do old people always fall in slow motion?"

"Do they? I guess I've never really noticed," I reply.

"Yep, it always takes them a while to hit the ground. When I fall I just splatter," he explains.

Ana returns with a new purse in hand and tells us a story of her own. As she was browsing through handbags at one of the vendor stalls, a black gentleman slowly walked over, browsed for a few seconds, and then grabbed a purse and started running. Fortunately, there was a beat cop nearby who noticed the fleeing suspect and grabbed him. The man threw up his hands and said, "No, I didn't steal it, that's my stall, I work there!" The lady who was actually working the stall noticed all the commotion and hurried over there, telling the cop that the "thief" was indeed her brother and was just goofing around. Meanwhile Ana is standing there flabbergasted, wondering what's going on. The man returns and says to Ana, "Why didn't you try to stop me?"

"What?" she replies, "I didn't know you were going to take a purse, by the time I noticed what was going on you were running. Why were you stealing your own purse?"

"Just trying to get a rise out of you, it was getting boring around here. Good think I didn't get arrested."

We decide it's time to hit the beach so we cruise over to Ocean Drive, find a parking spot and walk to the ocean. The beach is, of course, beautiful and busy and we find a nice spot to set up base and spend two hours swimming and sunning ourselves until our skin begins to show signs of crispiness. To Stella's disappointment we didn't notice any pop stars or celebrities, though I'm sure there were one or two there somewhere disguised with dark glasses and sun hats.

We pack up our sandy gear, shake it off, return to the car and do a cruise up Ocean Drive to see all the Art Deco buildings and then continue onto to an Outback Steakhouse north of Miami. This is the first time we have been to an Outback for lunch, and also the first time an Outback hasn't been completely packed where you end up standing around in the entrance with one of those little restaurant pagers for what seems like hours. Lunch is fantastic and the air conditioning is very refreshing on the skin.

We continue along to the Hallandale Beach area to get a better look at an unbelievable sight we saw from the highway on the way here – a giant bronze statue of Pegasus battling a dragon. It is located in the Gulfstream Park which hosts a racetrack, casino and huge shopping mall. The statue is simply mind blowing, and seems like it was transplanted from Las Vegas to south Florida. Sadly, we can't get very close to it as it is enclosed by a gate and fence, but we are able to take a few photos. I find out later that it is 110 feet tall, cost $30 million to build, and the dragon blows actual fireballs!

We do the short drive back to our hotel and take a leisurely, long walk along Las Olas Boulevard. We stop into several of the galleries to see the art and explore many of the shops and boutiques. I notice a utility box hanging off a pole that has been artfully decorated making it an intriguing piece of public art instead of an ugly grey chunk of metal obscuring the view. I love it. It reminds me that even though cities need to have utility boxes, transformer panels, poles and garbage bins, it doesn't mean we must blindly accept them being ugly.

We decide it would be a nice time for an end of day swim so we walk back to the hotel, get changed, and have the pool pretty much to ourselves. The hotel pool is right beside one of the main waterways so Ana and I slip out the back gate and sit down on the dock to watch the boats go by. I remembered to grab a couple of beers from the fridge in the room, as well as a cigar, so I spark one up and we enjoy a drink together. At this moment I feel so unbelievably happy. It is lusciously warm outside, I have a hot babe at my side, ocean water beneath my feet, two amazing children splashing around in the pool, million dollar yachts passing by, a cold bottle of Presidente in one hand and a meaty Partagas cigar in the other. Holy shit, I'm not just pretending to be a rock star, I AM a rock star!

We sit there for a very long time enjoying the scene and watching the day turn to night. By now the effects of the giant steak lunch are wearing off so we decide to go out for a snack. There are dozens of restaurants to choose from, but we simply walk across the street to the closest one with an outdoor patio, called the Big City Tavern, and order up a couple of plates to share. There is a steady stream of cars slowly crawling through the congested street, and among them are Ferraris, Rolls-Royces, Bentleys, Porsches and even a McLaren. We have a leisurely meal and only decide to leave when we could see Stella struggling to keep her eyes open. But considering it's nearly 11pm and we've been going hard all day, she has done remarkably well. Magnus, of course, is wide awake. We walk back to our room and put the wraps on day two of our Power Weekend.

Posted by Kristofor Olson at 7:05 AM

Email ThisBlogThis!Share to TwitterShare to FacebookShare to Pinterest
Labels: Travel