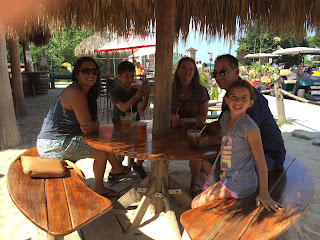 We awoke early to an already hot day. The bugs had been out partying last night on our boat and left a thin, greasy, multi-coloured coating of carcasses blanketing Bella Blue. I got to work scraping that mess off while Ana roused the kids and got them fed and watered. It was about 9:30 when we were ready to push off. Magnus came bounding out into the cockpit and I heard a scraping, crunching noise when he rammed his back into the hatch cover, thereby taking him out of action and back down below to lick his wounds. I was on the stern of the boat untying lines when I lost my footing and was saved from plummeting into the weedy water by my left hand which managed to grab one of the rails, but I put a huge long scrape across my back as I slid down the edge of the boat. Smooth.

We set a course for Put-in-Bay, the busiest of the Ohio islands, located about 14 miles from Sandusky. Our friends Tony and Angela were flying from Brantford in their nifty five seater airplane to meet us for a couple of days of exploring the islands. We arrived at the Park Place Boat Club around noon and got ourselves tied up at our favourite slip and checked in. Put-in-Bay is basically a small Caribbean island magically plopped down in the west end of Lake Erie. The main method of transportation is by golf cart, or by walking, and the main downtown area is populated by restaurants, bars, tourist shops, a giant park, and a long series of marinas that ring the beautifully protected bay.

We rented a six seated golf cart and cruised out to the airport. Now I've never before picked anybody up from the airport in a golf cart, but after experiencing this I would highly recommend it. There's no line of taxis, no porters waiting to take your bags, no time limits, no restrictions, and you could pretty much drive right down the runway in your cart if you wanted to. Tony and Angela had just arrived and were sitting on a bench waiting for us – perfect timing. They jumped aboard the Olson Express and we took them for an island tour. Along the way they told us about their lovely flight across the lake and how much they enjoyed taxiing up the Put-in-Bay runway with a steady stream of happy people in golf carts on the nearby roadway waving madly to them. Apparently that doesn’t happen in most airports.

We stopped at a small park that had a light keeper's house and an excellent view across the water overlooking the mainland. From there we followed the road around to the State park and went for a walk out to the public dock and around the park, but after watching all the seagulls munching on a bag of popcorn somebody had scattered over the ground, we became a little peckish ourselves so we made our way back to the sailboat, passing through the comparatively busy downtown area. We were able to drive our cart all the way to the end of the dock and park it right beside Bella Blue.

After a nice lunch in the cool interior of the boat we continued our island tour and covered pretty much every available road we could find, finding a nice beach where we skipped some rocks, an ocean-side house for sale that we trespassed around, Perry's Caves gift shop (we did the actual Cave tour the last time we were here – lame) and a few other shops. By the time we were done our hands were tired from waving at all the happy folks similarly zipping around in their golf carts, even after I accidentally cut them off blowing through a stop sign. We ended up at the Mojito Bay for a drink, which is groovy little beach bar that is similarly plucked straight out of the Caribbean, complete with sand floors, tiki huts, thatched roof, swing chairs at the bar and great reggae music on the speakers. From here we continued to the liquor store across the street to pick up a bottle of sparkly wine for the girls and a round of Buzz Balls for Tony and I – these sickly sweet bubbles of booze that get you well on your way.

Our first attempt at the Keys restaurant, right next to our marina, was a bust. They were doing a pig roast extravaganza, but the wait was going to be ninety minutes and we were way too hungry for that so we walked around downtown checking out the menus of a few other places, and were not overly excited about any of them. We went to the giant Boardwalk restaurant, found a lovely table overlooking the bay, and then found out that the restaurant was closed, so in the end we settled on dinner at the Chez Bella Blue. The crew flew into action and, lubricated by glasses of wine, we put together a lovely meal of grilled sirloin, rosemary potatoes, bread, veggies and a leafy green salad.

The kids went to bed shortly after dinner and the rest of us lounged in the cockpit late into the night discussing everything from the merits of the Electric Light Orchestra, life in the islands, future vacations, and possible solutions for the damn squeaky fender that was rubbing against the dock.
Posted by Kristofor Olson at 6:25 AM