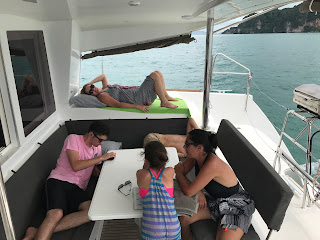 Stella and I began the day by sliding carefully into the kayak and paddling over to the nearby bay. As we paddled around exploring, I noticed something moving on the beach – a monkey! We stopped paddling for a moment and watched him walking around on the beach, in no particular hurry with no obvious agenda and certainly no interest in the two humans paddling around in the bay. When we returned to the boat we sent Mac and Maddy back out in the kayak to see if they could find the monkey, and they did.

We prepared a big breakfast of scrambled eggs, toast and cereal and got everybody fed. As we were finishing up, a Thai man and woman pulled up in their traditional Thai longboat and offered us a big platter of freshly caught giant prawns, which we happily purchased.

After brekkie, we pulled anchor and sailed north to Koh Phing Kan, otherwise known as “James Bond Island” because it was used in the filming of the Roger Moore film “The Man with the Golden Gun” in the mid-80’s. Before we left on this trip, I offered the family the opportunity to watch this movie, thinking we might visit this island, and they surprisingly agreed to it. We are not big on old movies, but this one was particularly lame, although you could certainly see the standard Bond formula at work, which really hasn’t changed much at all over the years – the newer movies just have better fight scenes, but the stories are just as improbable. The man with the golden gun certainly didn’t seem too scary - his little golden gun looked like a flimsy toy, and his distinctive third nipple simply looked fake. Roger Moore was pretty cool, though.

We took the dingy and kayak into the island but after reaching the beach we were told we would have to pay 400 baht per person to go on the island. Considering this island was no more amazing than any of the other dozens of ones we had seen already, and there were a bunch of vendor shacks set up along the beach, it was an easy decision to give this one a miss. As we were leaving, the tourist boats were already starting to arrive, so it was time to get the hell out of there.

We continued sailing to the Muslim fishing village Koh Panyi, which was about six miles to the north-east. This village has been here for over 200 years and is built completely on stilts. The showpiece of the town is a large mosque built against the backdrop of a huge, sheer limestone cliff. We anchored Toy Boy and locked it up as there was an awful lot of boat traffic here and this village is a major tourist draw. We did two runs with the dingy to get everybody on land and then locked the dingy up to one of the docks.

The village was interesting, but extremely hot and incredibly filthy. It also looked surprisingly poor considering that approximately 3,000 tourists descend on this place each and every day. There were dozens or maybe even hundreds of small vendor shops selling food, cheesy t-shirts, cheesy cheese, trinkets, jewelry and a bunch of other junk. To me, the only real points of interest were the mosque and the school, where we were allowed to look through the classrooms as the children were having their lessons. In one of the classrooms, the youngest children were each lying on their own mat having rest time, and some of them were sucking on bottles of milk. In another class, a stern looking Thai teacher was pacing up and down the rows carrying a large ruler. Tony and I were hoping he was going to give somebody an old school licking, which would have brought back some not so fond memories of our elementary school days, but the kids must have been well behaved because nobody got whacked. Or we just didn’t stick around long enough.

The day was really heating up and all that heat was getting trapped beneath the roofs of the floating village, so we decided to get out of there before all the garbage lying around really started to smell. We pulled anchor and sailed south. We had both the main and head sails fully out when we noticed a kink in the roller furling, and when Tony was trying to fix it something let loose and all off a sudden we had a jib sail flying around out of control. Angela and Ana were holding onto the lines, trying to pull it back in, but the force of the wind was way too strong and they started getting whipped by the ropes. They got free of that and moved to the aft of the boat while we pulled in the jib, but all the while the autopilot was taking us into shallower and shallower water. We got things under control in time to avoid grounding ourselves and got back on track. When sailing, it’s usually best to assume something is going to go wrong at any minute, and be prepared for it, because it will.

We sailed to an island called Ko Ku Du Yai which has a beautiful hong and beach, but a very shallow entrance. We did make it in here last time we chartered and I was hoping to do so again, but after making a couple of passes and seeing the fast moving  current and plunging tide, I decided not to risk it. Instead, we continued sailing a bit further south to Ko Yao Noi and we anchored just off the Paradise Hotel resort. By this time, many of the crew were feeling completely rotten. At first we thought it was sea sickness, but all the evidence was pointing to a touch of food poisoning or maybe a stomach bug. Maddy, Magnus and Tony all had turns at spewing over the side of the boat at various points of the journey, and Angela’s stomach was threatening to let loose too. Maddy had it the worst – when she wasn’t throwing up she was lying comatose in various locations on the boat.

Most of us went for a swim, but when somebody spotted a jellyfish, that scared all the kids away from the ocean. Ana, the kids and I took the dingy for a rip to a nearby beach to explore. As the tide was on its way out it was very tough navigating through all the rocks to actually get to the beach, and once we did we didn’t find much of interest there anyway so we cruised back to the boat.

We sailed east to an island called Ko Hong and it was just stunning. We were also able to tie up to a mooring ball, which is always nice since you don’t then need to anchor. Stella, Mackenzie and I jumped in the dingy and motored into the nearby beach to explore. The tide was still low and it was impossible to get right to the beach, so we just took the dingy as far as it would go and then walked the rest of the way in, being careful to avoid the dozens of spiny sea urchins that were crawling around in the coral. We had a look around the beach and then walked back into the jungle and found a cave that I had seen mentioned in the piloting guide we had on the boat. We ducked into the entrance and were surprised to find a giant cavern, probably 50 feet high. We had a flashlight so walked the entire cave, checking out the walls and ceiling and trying to find bats, which we surprisingly did not. This would be a perfect spot for a full on cave party.

After returning to the boat, a small storm system hit us and water started dumping from the sky. The winds whipped up and blew our kayak paddles, as well as a plastic container with watermelon into the water, so Mackenzie and I leaped into the dingy and did a rescue mission. We returned safe, with paddles, and watermelon and were hailed as heroes by the rest of the crew as they raised us up on their shoulders, cheering.

Despite the sick crew we decided to go ahead with our lavish dinner plans. Angela and Ana cleaned up the prawns and got the rice and a magnificent stir fry going while I fired up the grill and cooked the chicken and prawns. The four sick crew members simply could not face dinner so Angela suggested having dinner guest. How do you find dinner guests when floating around in Phang Nga Bay in southern Thailand you may ask? Well, you jump into your dingy, motor over to the nearest boat, and ask them if they would be interested in dinner. Nobody ever says no. Earlier, the English people we had met at the briefing, Mike and Jenny, had arrived in their 46 foot monohull named “Kingsman” and were tied up to a mooring ball not far from us. They had also anchored near us the first night, and knowing they were newlyweds we renamed their boat “Honeymoon Suite”, which was infinitely more appropriate.

Boater protocol is such that clothing choice is made according to the weather. In this case, the right choice of clothing is bathing suit and nothing else. So imagine our surprise when they arrived wearing clothes! I felt compelled to put on my Beer Lao singlet just so they wouldn’t feel overdressed. As they stepped onto the boat, Bryan Adam’s “Summer of 69” somehow popped to the top of the playlist queue and I apologized profusely, and assured them that although we were Canadian, we didn’t sail to Bryan Adams all day long. They told me they had Bryan Adams on their setlist too, but I think they were just trying to make us feel better. I wish it had been a Jimmy Buffett song instead, or even Slipknot.

We had a lovely meal together and they were very happy to join us, even though they did express their sorrow at the sickly state of our companions. But in the end it worked in their favour so I think they were secretly very happy that some of us had eaten the poisoned items at the at the dodgy breakfast buffet. They were a very interesting couple - Mike was an ER doctor and Jenny was a television producer and they had both recently accepted jobs in Australia, which they were meant to be starting immediately after their five-week long honeymoon. Impressive.

Our guests left around 10 pm and by that time we were quite tired, but because it was so damn hot and our crew was sick, we turned on the generator and ran the AC for an hour to cool the boat down and give the sailors some temporary relief. It costs five euro per hour to use the generator so we didn’t want to get used to running it all night, but it did certainly make it easier to get to sleep.
Posted by Kristofor Olson at 8:41 AM