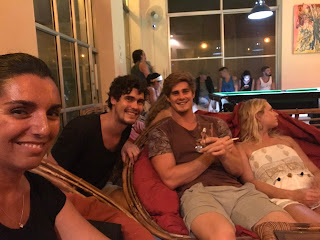 Last night the rain fell in buckets, making a monstrous noise on our tin roof and when we woke up it was still raining and showed no signs of stopping. I snuck out of the room early with my laptop and went down to the lobby to do some writing. Every night the pool table in the lobby is transformed into a bed of sorts, and today there looked to be two people sleeping there instead of the regular one. Lucky night at the bar, perhaps?

The Henriques had hired the same driver that brought us here to take them to the airport this morning, and he arrived earlier than expected, so by 8:30 am they were loaded up and ready to go. As we were saying goodbye, a cow came lazily walking up the middle of the road, looked over at us, shrugged, and kept on walking. Morning rush hour in Otres.

We shared a round of hugs and smiles with the Henriques and then they drove away, waving at us through the window, and with that concluded the first phase of our trip. The Holriques were officially disbanded and now we were down to a team of four. It was a remarkable three weeks we spent together and we had some unforgettable moments. Moving around in a pack of eight was easier than I was expecting – we rarely had trouble finding space in restaurants, hotels or busses and we also managed not to kill each other after spending so much time together in close proximity. They are great travelers and we were so lucky to have them with us!

It was Joey’s birthday today and the invitation to join him in the evening was still open so we confirmed we would certainly be tagging along. But until then we had no plans, and since the rain just kept coming it turned into our first down day of the trip. We read, we wrote, we lounged and we even had a little nap, and the day passed quickly.

At 7p m Joey loaded us up in tuk-tuks and we took off for Backpacker Heaven, which is in Sihanoukville. I think I may have been a little hard on Snooky in my journal yesterday - nobody looks good in the morning – even cities. But in the evening, she looked pretty nice, with many restaurants, lots of people walking around, many lights and lighted decorations, beautifully warm but with a nice ocean breeze, and drinking establishments everywhere. All the ingredients for a great night…and a lousy morning.

The South African owners of the hotel, Mitchell and Clarissa joined us as well. Backpacker Heaven is in a strange location – right on a busy commercial road in Snooky, with neither a beach nor ocean in sight, but Joey tells us he is friends with the owner and it is extremely popular with travelers and always busy. As we approached the building it looked much more like a big hotel than a backpackers. Lying by the front entrance were a hundred pairs of flip flops (they must have a barefoot policy) so we flipped ours into the pile and went inside. We followed Joey through a strange labyrinth of narrow hallways, dark staircases, wet and slippery floors, and eventually we popped out in a beautiful pool area beside the bar, which was lively and full of people. The owner Thomas greeted us at the door and we found seating for seven on the comfy couches and chairs. The kids, as usual, were the only minors in there but, as usual, they made themselves comfortable and settle in.

We had great conversation with Joey, Mitchell and Clarissa, accompanied by cocktails, draft beers and Joey’s frequent request for rounds of Jager bombs (shot of Jagermeister in a mug of beer, consumed in one go please). Mitchell had recently inherited the Otres Lodge from his father who had sadly passed away, so he was there taking care of all the administration involved in such an event. He and Clarissa actually worked as yacht crew on big yachts, either in the Mediterranean or the Caribbean, so we quizzed them endlessly on the process of qualifying for this work, finding work, what the daily routine was like, how the shift rotations functioned, work visas, shore leave and so on and so forth. As this is one of the most interesting retirement job possibilities for us, we were mesmerized by every word they said. Their most recent jobs had been on one of the Russian oligarch’s monster sailing yachts, which was over 100 metres long and worth hundreds of millions. Caviar, anybody?

Joey entertained us with stories of his travels, which seemed to be centered on some of the most dangerous places in the world. It wasn’t clear if he planned it that way, but he certainly isn’t scared of adventure. And those Yager bombs just kept coming. A live band set up and started rocking the place, and they were surprisingly good, but by 11 both Stella and Magnus had fallen asleep so we decide it was time to head back. We tuk-tuk’d it back to Otres Lodge and found Party Round Two well underway at the bar. We put the kiddies to bed and joined the action, meeting so many new people, all of whom had an interesting story. That is one of the best parts of traveling in these less frequented parts of the world – the people you meet inevitably have a story. Why they came here, how they got here, where they have been previously, and how they have adjusted to living away from their home country. It is always very easy for us to connect with people we meet, as we’ve similarly lived away from Canada for years, but we've also been fortunate enough to have visited a lot of countries, so we can usually find a lot of things in common to talk about with pretty much anybody.

Joey and gang arrived shortly after us so it turned into a real frenzy then, with more Jagermeister poured, more cold beer, and fleeting thoughts of how severe tomorrow’s hangover was going to be. At some point, the bar seemed to immediately drop from full capacity, to me standing there by myself looking at the last remaining bartender and him looking at me. It was like a showdown. He was waiting for me to draw my hand, signaling “One…..more…..beer.” and I was watching for him to either wave me away, reach for another frosted mug, or perhaps collapse completely as his eyes were so glassy I could see my own sad reflection in them. In the end, I broke first as my body hit drunk man autopilot and my feet started moving me back to the room, but not before I could give the barkeep the Olson nod, signaling we were square, and had both made it to the end of the night in one piece. Ana tells me it was 2:30 when I returned, but I was already sleeping as I passed through the door.
Posted by Kristofor Olson at 11:48 AM