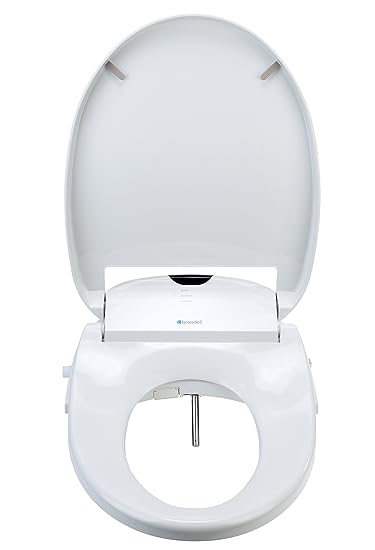 Yesterday I received this text from Ana:

“Would you like a toilet seat for your anniversary present? They are on sale.”

Wow. That is a conversation only a couple who have been married for 16 years could have.

Normally, we do not even buy each other anniversary presents, and even birthday presents are sometimes a hit or miss. This does not mean we do not love each other – au contraire. What it does mean is that we don’t like wasting money on stuff we don’t need.

While I would absolutely love the luxury of owning a Brondell Swash 1000 Bidet toilet seat for $479.99 on sale at Costco until October 1, 2017, I just cannot stand the thought of spending over five hundred bucks on it, especially after enjoying nearly the entire summer in super cheap Asia where that amount of money could buy dinner for four for 25 days in a row. My resistance is even more inspiring knowing that my buddy Tony, who stole my fancy toilet seat idea last year, has that exact same model and periodically taunts me for having a low class, standard-issue, budget toilet seat.

Yes, it is our 16th wedding anniversary today and we did do something to celebrate – last night we went to the kick-off show for the DT concert series in Paris and enjoyed the talents of Royal Wood and friends. It was an excellent show and the kids were happy to give us a night off on our own - although they did demand to join us for our actual anniversary dinner tonight. We are going to try out a new Vietnamese pho restaurant in Brantford. We have been home for a month now so Asian food is slowly being re-introduced back into our diets.

Last night we saw a bunch of friends we hadn’t seen all summer, so we spent a fair bit of time discussing our trip. It is still very fresh in my mind and, unbelievably, I haven’t yet completely adjusted to being back at home. Thursdays are feeling like Mondays, Mondays feel like they should be Sundays, and some nights I lay awake until 2am reading H.P. Lovecraft stories because I can’t fall asleep. And I find myself sometimes craving spiced-up noodles and rice for breakfast. I guess that’s what happens when your mini-retirement ends and you are abruptly plunged back into the working world.

So yes, life as we know it is back on its regular track. Ana has been busy as hell with her job since we returned and it’s not going to let up for at least a month or two. I decided to take a course that will allow me to get my Project Management Professional designation, but it is being run over four full weekends in October and November, so our autumn is proving to be exceptionally packed with activity. But that’s the way we like it.

I will finish this short journal with a big “I LOVE YOU” to my wife Ana. Even after 16 years she still continues to impress me.
Posted by Kristofor Olson at 3:55 PM