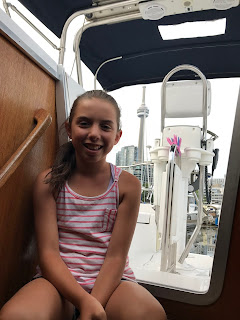 For the first time in many days, I have a sleep in – until sometime after 7. I have always been a morning person, and with two kids, that has always been the time of the day I can have an hour to myself, usually occupied by writing. This morning my view is particularly interesting as the position of our slip is oriented such that if I look out the main entryway, the CN tower (Toronto’s most iconic structure) is directly in the center of my view.

Today is our first full day in Toronto with the Henriques, so the only problem is figuring out what to do in this city of possibilities. Ana suggests we go to the Beaches area as none of us besides her have ever been there. After a stop for coffee and another quick browse through the Nautical Mind bookstore, we catch a streetcar and ride it all the way east across the city, giving us plenty of time for conversation. Tony has been encouraging Magnus to try and find some work this summer, preferably in the farming industry, so he can learn what hard work really feels like – such as picking tobacco while stooping over in the 30-degree heat. Magnus remains unconvinced but is definitely interested in earning some money.

“How do blood donations work? I heard you can get paid for that,” he asks.

“They only pay you for blood in the US, not Canada – here it is just a volunteer thing,” Ana replies.

“How about sperm donations?” he continues.

We all look at each other and burst out laughing. One of us says, “Yep, you can definitely get paid for those in Canada.”

I take this one on. “I had buddies in university who did it. I think they got 25 or 30 bucks per donation.”

Tony offers to do a demonstration with a water bottle, but I decide to cut this line of questioning off right there and I tell Magnus that at this point in life, he should really be pursuing other revenue opportunities. The look in his eyes tells me he’s back to thinking about picking tobacco, and not too excited about it. 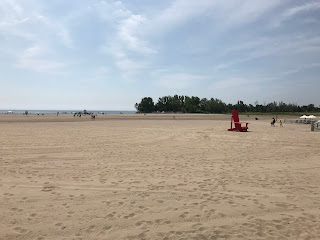 I am again surprised by Toronto as we arrive at our destination and find an expansive, powdery beach with many people on blankets and others swimming in the water or cruising around on paddleboards. We take a long stroll down the wooden boardwalk, partially shaded by mature trees, and then we turn up a side street and make our way up to the main commercial centre on Queen Street where we browse through a few shops and then try to settle on a lunch spot. The Green Eggplant is where we land and our lunches are delicious and massive, which causes a major problem as I was hoping to take advantage of the incredible culinary options in Toronto and eat at least three small lunches. After this feast I don’t know how I’m going to be able to stuff in a roti, a street dog, sushi, and some Ethiopian food.

At this point, we decide to split up. Ana and the kids are keen to stay at the Beaches for longer to explore the shops, while Tony and Angela want to return to the marina to take care of some boat stuff, and I want to go to the Ontario Art Gallery. I catch a ride with the Henriques in an Uber and jump off at Lakeshore and Yonge and start my long walk north into the city. Like all big cities, walking around in Toronto is an adventure itself. Cities are the lifeblood of any country as the thick and steaming density of people creates so many possibilities and a market for pretty much anything. As I walk up the streets and see all the thousands of people walking determinedly, one question keeps popping up in my brain: Where the hell is everybody going?

Since Ana spends a significant portion of her days in an art gallery, she is usually less enthusiastic to visit them on vacation, which works out well as that gives me the opportunity to take my time, browse around, and not have to rush through the experience. Similarly, when I’m not around, it gives her the chance to take her time in the shops, instead of having me standing outside waiting for her, tapping my foot and working on my farmer tan. 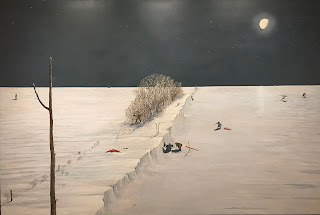 The gallery is excellent. I have been here several times before, but each time it is a new experience because the artworks are constantly changing, and there’s simply so much here that I always discover something new. There are several amazing paintings from an artist I have never heard of named William Kurelek that really blow me away. He was Ukrainian-Canadian artist that grew up in Western Canada and painted a lot of very strange prairie scenes that really grab me. After a quick Google search, I learn that images from a very famous painting of his called “The Maze” were used on Van Halen’s album cover for “Fair Warning” – an outstanding album and one of my favourites. I need to learn more about this guy…

We reconvene on the upper deck of Cabin Fever around 5pm for happy hour and to enjoy the sounds of the airplanes taking off and landing. The constant airplane activity is not quite as enjoyable as it first was, and even Tony the pilot admits it is getting a bit annoying. I learn that Ana and the kids spent most of the afternoon exploring shops at the Beaches and then later, the busiest part of Queen Street. Stella bought a miniature chest of worry dolls, which are these tiny dolls you can tell your worries to before bed, put them under your pillow, and then by the morning the worry is gone – an excellent investment.

Boat dinner is cooked communally and then served on Bella Blue and is delicious - grilled chicken, asparagus, potatoes and salad. Ana and Angela have been doing a bang-up job of planning out all the meals and we’ve been eating like royalty.

We finish up the evening with drinks on Bella Blue, and some great conversation as we watch the night fall over the city.
Posted by Kristofor Olson at 4:41 PM