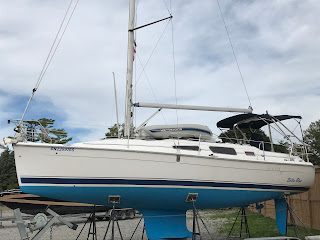 After a full and wonderful sailing season on Lake Erie, our sailboat Bella Blue is back on land and being prepared for the long winter's nap. This time of year is always such a significant transition for us as the days get shorter, the nights lengthen, and our automatic weekend plan of rushing home after work on Friday, packing the van, and heading straight to the marina at Port Dover come to an end and our weekends plans no longer run on auto-pilot.

Although I am always sad to put her away, at least it leads to an autumn season in southern Ontario that can stretch right into December and offer lovely, pleasant weather. It also gives us a chance to reconnect with our non-boater friends, who are almost completely ignored from May to September, just like our boater buddies fall off the radar between October and April! Yes, us boaters live a sort of dual existence, much like anybody with summer weekend assets that include trailers or cottages must do as well.

We enjoyed an excellent sailing season this year. It got off to a bit of a slow start in May and June with lovely weather from Monday to Thursday, but then as the weekend approached the clouds would typically gather, temperatures would plummet, and the weather would turn sour until Sunday evening when the skies would clear and temperatures rocket back up. This causes what's known as "incessant boater weather anxiety" and the clearest diagnoses of the condition is when you notice a boater friend checking weather forecasts on their smartphone every 15 minutes throughout the week. Yes, we did get the occasional hot weekend, but there's just never enough of them. 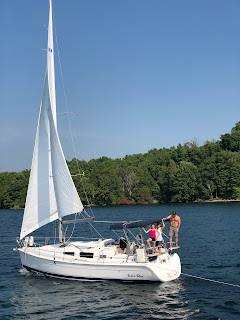 Our two week sailing trip to Lake Ontario and the Thousand Islands area in July coincided with the hottest and sunniest two weeks of summer, and we took full advantage of it, sailing about 350 miles during that time and covering a great swath of that Great Lake. I am lobbying Ana and the kids to spend a full sailing season there at some point as there is so much more to explore, but it is hard to leave our dock family at Port Dover.

Let me tell you more about our dock family. We have always likened the dock life to living in a  Brazilian favela. Otherwise know as shantytowns, ghettos, slums, or projects, these are grindingly poor, densely populated areas of ramshackle housing, usually located on the outskirts of heavily urbanized area. In the favela everybody knows your name because you are practically living on top of each other. There is little privacy, no modesty and very little sense of personal space as you could be living in a cardboard box or, if you are lucky, actual wooden walls with rusty, corrugated metal roofing, all held together by discarded rope and luck.

Well the dock is just like that, except that everybody is rich, or at least rich enough to own a gas guzzling boat. But the privacy issues are very much the same as the boat slips are configured such that you can reach out of your cockpit and easily snag a high-five from your buddy in the slip beside you, or maybe he will even hand you a beer. Doors, windows and hatches are left open, people hop on and off each others boats (with permission), and friends from neighbouring docks arrive at all hours of the day, unannounced, but always welcome. Dock rats (also known as children) have free run of the place, and at any time of the day you might find as many as a dozen of them overtaking your boat, looking for snacks or fishing rods or supplies for some sort of marina project, like building a treehouse or trying to rip off the vending machines or constructing the ultimate carp trapping device.

The sense of community and comradery around the docks is outstanding, especially when partaking in illegal activities, just like the favela, except that boaters do things like drinking in public and smoking weed instead of robbery, extortion, and murdering people. But we still have a lot of fun with it. And whether you like it or not, people really get to know a lot about you. Time is plentiful and the days are long, so boaters spend a lot of it talking with each other, passing on news and gossip, and speculating about who's thinking of selling their boat, who wants to buy a boat, and who's boat has cost them the most in repairs this year. And some boaters have an incredible eye for detail - nearly uncanny in some cases. Early in the season Ana and I were on our boat and a fellow sailor stopped by to chat. I remember meeting him briefly several years before, but since we didn't even put our boat in the water last year, he hadn't seen it for a long time. He looked down into the water and said, "I see you guys changed the type of bottom paint you use - this one is a much brighter blue colour." What?? How could he remember the exact shade of blue of our bottom paint from two years ago and I couldn't even remember his name. Sailors in particular love nothing better than to huddle in each others cramped cockpits and talk about sailing. They discuss rig tuning, high performance sail material, anchor types, rudder repair, boat electronics, fuel densities, oil viscosity, wind conditions, spinnaker configuration, and so on. In fact, many of them are so committed to talking about sailing, that they never seem to get out to do any actual sailing. 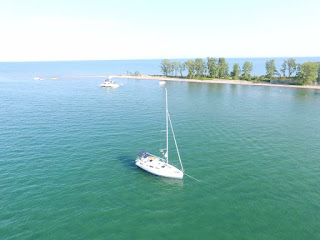 The best weekend of the summer was the August long weekend. It started out like most others, driving directly to Dover after work, transferring gear and food from the van to the boat, making Ana a nice Caesar (you may want to check this if unfamiliar with the legendary and uniquely Canadian Caesar cocktail) and a gin and tonic for myself, and then gathering with our buddies on dock 2. Dock 2 is where the legendary Doerr brothers reside, along with a motley crew of seafaring guys and gals, and this is where weekend plans are hatched. As the weather forecast was looking particularly sweet, it was suggested that a Saturday overnight trip to the lighthouse at the end of Long Point was in order. At that I said, "Oh, that's great, we've never been to the lighthouse before." This brought everybody on the dock to a standstill, and they all became silent and looked at us. Somebody finally spoke. "Are you serious? You guys have taken that damn boat to every marina and bay on Lake Erie, to Lake Huron and the North Channel, and you just came back from a return trip to Lake Ontario and the Thousand Islands and you're trying to tell us you've never been to the lighthouse??"

"That is correct," I said. "But we are going to fix that tomorrow!" This awkward and embarrassing moment was followed up with several house of drinking which soothed out the situation and allowed us to regain our confidence.

By 10:30 the next morning we were off, and had swapped Stella for Jaxsen (one of the Doerr dock rats) so that Magnus and him could play Magic the Gathering during the 2.5 hour sail there. Of course the powerboats get there much faster (and nearly all of our friends at the dock have powerboats), and Stella prefers high speeds, so her and Jaxsen's sister Jaime were happy to take the express boat like little power divas.

We finally arrived, got anchored in 8 feet of water and then rode the dingy into shore where the powerboats were anchored. The scene before us was idyllic; a beautiful clean beach, gentle breeze, kids running around everywhere having fun, and all of our friends lounging around on the beach and in the water, The peninsula that leads out to the lighthouse is nearly 40 kilometers long so the only way to get there is either by boat or by ATV as there are no roads. In fact, besides the final kilometer or two, the entirely of Long Point is owned by a private company (there is a long, strange history here...) and the public are not allowed on the land. This makes the Long Point beach and anchorage a most exclusive place indeed. 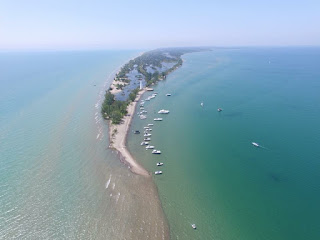 The day we spent there was magical, and an important source of the magic was the absence of any cell phone signals which meant there were no screen zombies to be seen anywhere, and our full attention was spent talking to each other. The kids were transported back in time to the 1960's, before video games, before childhood anxiety, before all the modern bullshit they have to deal with, and they spent the day beachcombing, racing toads, looking for (and finding) snakes, playing frisbee, snorkeling, entertaining the toddlers, and exploring freely, with little interference from their parents, which was just fine by us.

By dusk, everybody in our posse had decided to spend the night, so we had the kids gather firewood and dig a firepit in the sand. We all congregated on the beach after dinner and happy hour drinks on the boats. A few of the kids were just too exhausted to stay awake for the fire, but most of them were there, enjoying stoking up the fire and poking at it with sticks. The adults all had their Yeti cups filled with cold drinks and we stayed up around that fire until the early hours, under a canopy of stars. 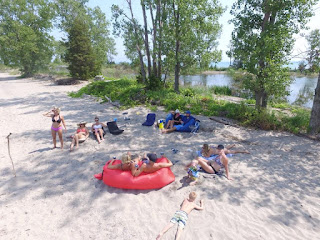 A new day broke, and most of the gang planned to leave mid afternoon, but as the day developed into the most perfect summer Ontario day you can imagine, what enthusiasm for leaving there may have been in the morning dissipated, and by evening we were all back around the fire, built even larger this time by the enterprising children who were gathering firewood all day. The day was packed full of adventure - dingy rides, tubing, more beachcombing, drone flying, fishing, snorkeling, long walks on the peninsula, and many hours spent in the glorious, warm water. A better day spent on Lake Erie, I cannot imagine. 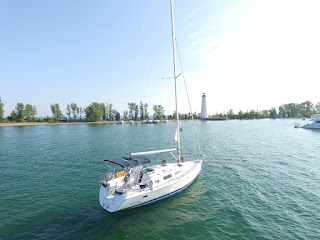 Sometime around noon on the Monday holiday, the boats all pulled anchor and headed back to Port Dover. By this time, the boat batteries were drained, cooler ice was melted, alcohol supplies were low, food supplies were gone, skin was blissfully over-sunned, and worst of all, we were all out of paper plates.

During one of the campfire sessions we were discussing cool boat names and Geoff mentioned one he had seen called "Smiles Per Gallon", so on the way home after the cell signal had returned, Ana set up a Facebook group by that name, and we all posted and shared photos of the best weekend of the summer, one which I will never forget.
Posted by Kristofor Olson at 7:01 AM