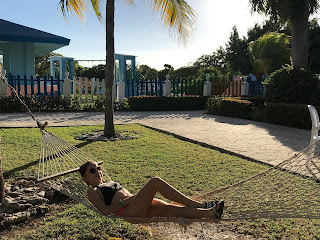 I get strangely overcome with joy when airplane passengers break out in applause after a successful landing. I’ve never really known precisely what the clapping is for, but nor do (I suspect) the majority of the clappers - I think many just join by force of social pressure. Is it applauding the pilots (or more likely the onboard avionics computers) that successfully landed the airplane? Is it the pure relief of being hurled through the air at 39,000 feet for hours and miraculously surviving? Is it an expression of thanks to the flight attendants, or perhaps the onboard entertainment? In any case, when the clapping begins, I always join in and find it immensely satisfying. Even though I don’t know what I’m clapping for, I feel incredibly happy, and applaud with gusto. Today, I wasn’t sure which way it was going to go, because moments after the rubber tires smoked the pavement of the Holguin runway, there was no clapping; just people looking expectantly at each other, waiting for somebody else to kick it off. I looked over to Magnus. He looked over to me, raised an eyebrow, and then did a single, soft clap. Then a second. And that was all it took for the passengers to burst out in a hearty round of applause, spreading love and happiness, all smiling, enjoying the ruckus. This was a fine start for our trip to Cuba.

As we stepped off the airplane, the moist tropical air enveloped me like a favourite blanket, welcoming me back to this fine Caribbean nation. The immigration process was predictably slow, and as we waited in line a drug sniffing dog weaved in and out of the white, wintry legs.

“Magnus,” I said, “I hope that dog doesn’t smell those bacon and Havarti sandwiches I put into your bag.”

“Hey, we’re not supposed to be bringing food in, I don’t want them in my bag! You take them.”

“No man, just leave them in there, these guys don’t care about that. If they do ask you about them, I’ll just say they are mine…unless the situation looks dicey, then I’ll say I’ve never met you before in my life.”

Well, they didn’t care about the bacon sandwiches, and soon we were on the bus headed for our resort - the Fiesta Americana Costa Verde. The ride took less than an hour, during which we had a quick nap to try and shake off the 2am start.

The queue at the check-in desk upon arrival was manageable, but sadly they did not have our room ready yet, so we were directed to leave our bags there and go for lunch, which we did, but with some grumbling as we seemed to be the only ones whom were not given a room immediately. This is the point on a Cuba vacation where you need to toss your Canadian expectations and hair trigger sense of irritability out the window, because time now has little meaning. Quick must be replaced with slow, precise must be replaced by approximate, and obstacles must be faced with a smile and surrender instead of fierce determination.

We received our room key and embarked on what I call the “Victory Walk’, which happens at the start of your trip and is when you cross the resort in your winter clothes, dragging your bags behind you, sweating in the heat, but with a joyful smile plastered on your face for all to see, as this is Day 1 of your holiday and there’s nothing but sand, sun, and free Pina Coladas in your future. The reverse journey on the final day of your trip is called the “Walk of Shame” for obvious reasons..

Ana shoved the key card into the door, and we pushed in, but found the room to be very occupied, with open bags, clothes and other junk flung all around the space. Fortunately, there was nobody on the bed doing the Hokey-Pokey, which would have been quite uncomfortable (but outrageously funny), so we just backed away, returned to reception, got another room, and performed our second Victory Walk to our new room, which was unoccupied, clean and very nice.

After some frantic unpacking and room organization, we left to spend the afternoon on the beach and at the pool, soaking up that beautiful hot sun, watching our ghostly white legs and arms sizzle as we sipped tropical drinks. This is what we came for; this is why we are here.

The buffet dinner was good (better than lunch), but the kids weren’t loving it. We told them the trick is to try little bits of everything to find what you like, and then you can stick with that. I tried talking them into having some of the delicious, fresh papaya that was in plentiful supply, and took up about a third of my own plate. They opted out, but did promise me that they would each try it twice during the week. We have a policy at home for foods you don’t like; you need to try it at least ten times before you can decide if you truly do not like it. Usually by the tenth time trying any food, you start to like (or at least tolerate) it. Stella has this game called Bean Boozled in which you eat colourful jelly beans, but beans of the same colour can have one of two flavours; a delicious one or a disgusting one. For example, the green ones either taste like juicy pear or snot. The red ones taste like strawberry or smelly socks. The blue ones taste like blueberry or vomit. Stella suggested adding a trick bean, which would taste like either papaya or smelly ass. But the taste would be identical! She’s so clever.

One thing we always notice when returning to Cuba is how kind the Cuban people are, and even how kind they look. In most countries, if you scan a group of people, say in a shopping mall or a market, or even just on the street, you will see a variety of faces. Some will look happy, but many will not. That guy looks irritated. The other one looks angry. This one over here looks like he’s going to rob me. That lady looks sad. Her friend looks mean. In Cuba you rarely see such an assortment of unhappy faces. Most Cubans simply look very kind, and you can see it in their eyes. Of course, the majority of exposure we’ve had to Cubans has been in tourist areas, but we have also been through several small towns and spent a fair bit of time in Havana. There seems to be a national sense of optimism, despite decades of enduring a senseless and cruel US trade blockade. The Cubans know how to have fun, and to make the most of their situation, something that cannot easily be said for many of us that live in supposedly richer countries.

After dinner we strolled over to the lobby bar, grabbed some drinks, and listened to a wonderful four piece orchestra play a set of songs. This was followed up by some terrible karaoke sung by drunken tourists who were pounding Havana Club rum all day long at the swim-up bar. It was so bad that one bystander actually covered his ears with his hands and ran out of the lobby.

Magnus had brought along a set of dice so we played a game that’s called simply “Dice”. During the game we got into a discussion about public toilets, as Ana and Stella had gone to the washroom, but none of the stalls had any paper. Fortunately, they found a roll laying on the ground in the corner.

“You never use public toilet stalls? I find that hard to believe,” said Ana.

“It’s because he doesn’t have servants to bring him toilet paper when he notices the roll is empty, which is what happens all the time at home,” I said.

“What about the ones at school?” Ana asked him.

“Are you kidding? Do you know how many things could go wrong?”

We all burst out laughing.

“Seriously. The hinges are all rusted so the door could fall off. There could be no toilet paper. Somebody could turn the lights off. Somebody could look in over the top of the next stall. It’s way too risky.”

“What if you have a Code Brown emergency at school?” I asked.

Considering our early morning start, we stayed out until a surprisingly late 9:30 pm and then retired to the room, but along the way met the bravest crab in Cuba. He was wandering around the front entrance to the buffet kitchen. Risky, my friend, very risky.
Posted by Kristofor Olson at 6:09 AM