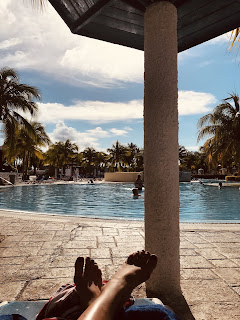 Ahh, back to work Monday. For some people.

At 8:45 am the scuba diving bus arrived and several of us from the resort jumped on and were whisked to the dive centre, which services all the resorts in the area. There were 12 divers in total and everybody got fitted for gear and then went down to the marina. The dock and facilities were in excellent condition, as was the 48’ dive boat. Once everybody was on board, the captain fired up the boat and we were off. It was another hot and cloudless day, but there was enough wind to create some chop on the ocean. We reached the dive site in less than 15 minutes and after a very short briefing from the dive master, we were all in the water and descending to the ocean floor. Because I don’t have my own dive gear, each time I dive I use the gear provided, and sometimes it either doesn’t fit quite right, or is simply not comfortable, which never results in the best dive. Today, everything fit and felt great and I was completely comfortable in the water and able to focus on the surroundings instead of fiddling with gear.

The clarity was very good and we dove a wall down to a depth of just over a hundred feet. The coral formations were cool, but there were not a ton of fish, although I did see two pretty lion fish together, chilling out amongst some rocks. At the end of this dive we returned to the marina, dropped off some people, picked up new people, changed tanks, and went back out on the water to a different site for the second dive, which was equally good, and provided the yearly diving fix I was hoping for. On the way back to the hotel, I was looking at my dive card and realized that I did my very first dive over 22 years ago. Yikes! Back then I was a diving fanatic and racked up around 60 dives within a few years. Ana also has her diving certification, which she trained for in 1999, in an extinct volcano crater, in El Salvador, and we did quite a few dives together, but she had a really bad dive in the Azores one time and hasn’t enjoyed it much since. She does want to get back into it, so our plan (dream?) is to buy a catamaran and equip it with dive gear and an air compressor so we can dive ourselves, at our leisure, anytime whenever we like. Sounds nice, huh?

I returned to the resort just in time for a light hot dog lunch with the family at the snack bar, after which we spent the rest of the afternoon at the main pool. Magnus, Stella and I got in on a pool volleyball game which was a lot of fun, and then they held this ridiculous bull riding competition where they throw an empty beer keg in the water and you have to balance on it like a bull rider. As I had done this once before in Cuba I knew the trick for staying level and managed to hold on for 35 seconds, blowing away the completion, and was awarded a lovely Cohiba cigar keychain, which I will treasure forever.

The rest of the day proceeded as normal - late afternoon break in the room, kids played tennis, enjoyed a fantastic dinner, had drinks in the lobby, played dice, and watched a bit of the show. Stella and I found a patch of tiles in the lobby that were perfect for hopscotch so we kept ourselves amused for quite some time with that. Then we realized it had the same number of squares as a chessboard so all of us played a sort of checkers game with ourselves as the pieces. That’s the sort of thing that happens when there’s no internet and creativity-sucking devices around. I had so much fun.
Posted by Kristofor Olson at 6:22 AM