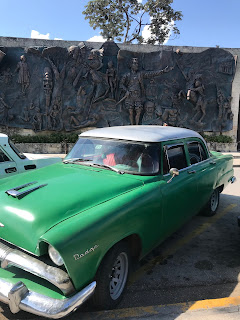 In a place where days have no meaning and time is an afterthought, Sunday arrived. Stella reluctantly joined me for my morning walk, but only because I had extracted a promise from her the night before after several days of trying to convince her. She was not disappointed, as we were rewarded with a beautiful, clear, warm day and we walked the expansive shoreline nearly as far as we could go, as we talked together about all sorts of things.

At 9 am, our new taxi-driving friend Osmany Ramirez picked us up and we took off for Holguin. Along the way we asked him all sorts of things about Cuba and he was happy to share his thoughts. During the last term of Obama’s presidency, the US government had begun loosening up the restrictions on Cuba, although didn’t go as far as fully ending the decades old economic embargo. But things looked promising, and filled people with hope on both sides of the dispute. Well, as soon as Trump arrived in office, one of the first thing he did was to stop it all and revert back to the senseless and cruel travel restrictions for no obvious reason besides perhaps bullying. So for now, Cuba will remain the lovely, unique, but economically crippled place that it is.

Holguin was interesting, and like all Cuban cities we’ve visited, quite run down. The roads were filled with cars, people, bicycle taxis and lots and lots of horses. We spent a couple of hours simply walking around downtown, exploring, popping into the many shops, and just poking around. Strangely, we seemed to be the only tourists around (at least the only obvious ones wearing tacky resort wristbands). We visited a library full of extremely beaten up books, an art gallery,  a cultural centre and found the museum of natural history but it was closed. Most interesting were the government shops, where the sparse inventory was displayed in antique wooden cabinets with glass tops so that you couldn’t touch any of the stuff. Some items were displayed behind the counters on old wooden shelving. What sort of things? A single pair of underwear, a few pairs of socks, a few sets of bedsheets, dish detergent, soap, various household items (but only one or two of each item), and even some plumbing supplies, but only a small number of fittings as opposed to the typical Home Depot shelf of fifty-thousand couplers, fittings, unions and pipes. It is all very strange, but the shops were packed full of people, and in some cases they were lined up outside, waiting to get in. Communism at its best.

We stopped for a cold drink at a lookout point called Loma de la Cruz, which sports a two-hundred-year old wooden Spanish cross and offers lovely vistas over Holguin and the surrounding countryside. Unfortunately the aggressive few vendors there were a pain in the ass so we didn’t stay long. The ride back to the hotel was nearly free of conversation as all four of us were bobbing heads and nodding off sporadically. This bit of activity clearly put too much of a strain on our weary bodies.

The rest of the day was great - beach, pool, hammocks (where Magnus nearly got brained by a falling coconut), tennis, an hour of internet in the lobby (first of the trip…and hopefully last), and then finally another great meal at a Cuban-themed a la carte restaurant.
Posted by Kristofor Olson at 6:24 AM