Day 11 - Cedar Point, the Doerrs, and Our Friend Cesar 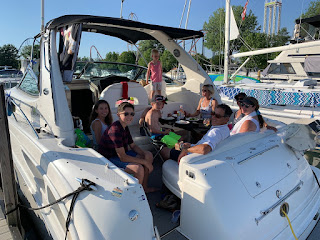 I slip the paddle board into the water before anybody is awake and go for a nice long ride. There is a surprising amount of swell in the water considering there is hardly any wind. I paddle over to the Seaway marina to have a look as we’ve never stayed at that one before, and then just cruise the shoreline back to our boat to get everybody up and moving. Magnus says he wants to get going so we can take huge walk, which I am totally up for. But it turns out to be just a ruse - once we’re near the shops he disappears inside one and spends forever looking around, finally deciding on a pocket knife that he buys, and then admits he didn’t really want to go for a walk in the first place. I force the walk issue and we do go for a short stroll before returning to the boat and casting off the lines for our next destination - the Cedar Point roller coaster park, the part of the trip the kids have been anxiously awaiting. Cabin Fever is slightly  behind us, as their attention is diverted to a huge dead snake they find floating by the docks. Tony later tells us the snake had a girth similar to his arm. Now Tony’s no Popeye, but he’s no string bean either, so we’re all suitably impressed or, in Magnus’s case, terrified as he has a major serpent phobia. In fact, I did see a few of those crafty Lake Erie water snakes lurking in the waters of the marinas during the past two days but kept that secret from Magnus so he didn’t have a spaz attack and refuse to ever swim in the lake again.

That north wind provides for a lovely sail to Cedar Point, which is located on a big peninsula very near to Sandusky. We eventually find our slip, after a wrong turn, and our friends the Doerrs (we know a lot of Doerrs; these would be the Geoff, Sherry, Ashton, Ty and Victoria variety) are there already, docked and cooking lunch on their boat bbq. They were in the neighbourhood for the big all star home run derby baseball event in Cleveland and decided to head further down the lake to get in on some amusement park action. The dock master comes over and gives Geoff hell for cooking on his boat as that’s NOT ALLOWED, so they finish the burgies off in the frying pan and invite us over for lunch, which we happily accept. It is great to have part of our dock family here with us - too bad the rest of the pack weren't able to join us too. I guess they are too cheap, or maybe just spent all their travel budget on new dingies. 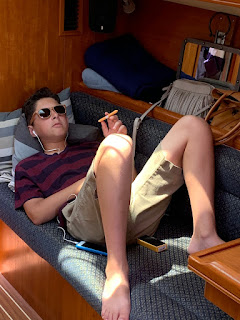 Cabin Fever arrives shortly after us so we all have a welcome drink together and then head over to the marina pool for a chill down session. Along the way we notice the pool and grounds are lovely, but the Cedar Point marina, like the others, is suffering some damage from the high water and parts of their parking lots and lawns are under water. The pool area also has a hot tub, which feels surprisingly good on such a scorching day. The kids have just an awesome time together and I think Magnus and Stella are especially happy to be around their friends instead of stuck with us boring adults like they have been all week. During our hot tub discussions, Geoff fills us in on the cause of our engine issues back in Erie. Apparently, it’s because we had bananas on the boat. Bananas are the root of all evil for boaters, and we had a bunch of them in our fruit tray, ripening away. Sounds far fetched? Well, after the kids heaved the remains of the on-board bananas in the lake outside of Erie harbour as we were leaving, everything on the trip has gone swimmingly, so maybe there’s something to this long held superstition? 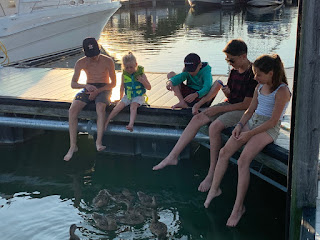 Dinner comes and goes and the six adults find themselves in the cockpit of Bella Blue with a bottle of champagne making a toast to our friend Cesar Marteleira, who is nearing the end of a battle with cancer. Cesar has been a great mentor to me since we first met nine years ago, after we had just bought Bella Blue and were into our first season at the Port Dover Harbour Marina. We were sitting on our boat and Magnus, who was a young curious boy of five at the time, noticed somebody in a sailboat a couple of slips down from us. He jumped on the dock, walked over in his bulky lifejacket carrying the ever-present Scooby Doo fishing rod, and when the resident sailor popped his head up from down below Magnus said, “I like your boat.”

The sailor looked at Magnus, then shifted his eyes our way, then back to this cocky little lad and replied, “Thanks. But it’s not my boat.”

I decided to interrupt the dock showdown and walked over. I looked at the man and had a feeling I knew who he was. “Is your name Cesar?” I asked.

“Well nice to meet you! Arturo told me I might run into you guys down here.”

And since then Cesar has been a close friend of our family and we’ve spent countless hours together in the marina, on the water, and in our homes telling stories, eating good food, drinking homemade Portuguese wine, and sharing lots and lots of laughs. He came sailing with us the second time we had Bella Blue out and helped us rookies learn the boat’s systems and gave us a few tips, and many times since then he’s joined us for day sails in the area. Over the years we’ve also gotten to know Cesar’s daughter Melissa and son Justin and his brothers Louie and Horatio, and now his partner Kathleen. All amazing people.

I want to tell you what sort of person Cesar is, or at least how I perceive him to be. Cesar is a guy who lives life on his own terms, who loves life fearlessly, and doesn’t play by the rules he considers to be wrong or senseless. He always has time to talk to you, and he’s always had time to talk to our kids, and really talk to them, not just “at” them. He is a vagabond and a traveler, moving from place to place, keeping nimble, keeping fresh, making friends. He tells great stories - sea stories, girl stories, adventure stories, and it seems he’s already packed several lifetimes of experience into this one. He is a philosopher - he wonders why things are the way they are, and how they came to be this way, always questioning. He is cultured, well read, intelligent, yet not afraid to say “I don’t know.” He doesn’t give a damn about money - in a good way, and sees it having it simply necessary but not as a goal unto itself. Cesar has lofty dreams, but he’s the sort of guy who actually accomplishes his dreams instead of just sitting around talking about them.

Cesar is not the guy who’s supposed to get cancer. Both Ana and I have always felt like we have learned so much from him, but have so much more yet to learn. Since learning of this disease, he has faced it head on. When they gave him a few months and told him he could extend it a few more with chemo, but the effects of that could be devastating, he said no thanks, and that was two years ago. He has already kicked cancer’s ass, no matter what happens. He’s talked openly about his disease and hasn’t run away from it. Instead, he’s taken care of business, prepared, and used the time he’s had, magnificently. 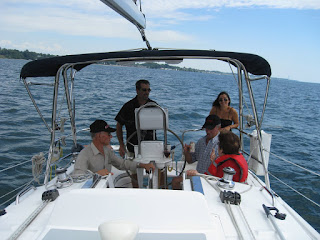 But you want to know one thing that really pisses me off about Cesar? The guy just looks cool all the time. The day before we left on our sailing trip, we visited him in the critical care section of the Brantford hospital. There he was, lying in bed, with just enough beard scruff to be in a men’s cologne ad, coifed hair, tanned, with that ever present mischievous grin. Goddamn it, I’ve never looked that cool in my life, and here he is outdoing everybody in a hospital bed wearing a friggin backless blue gown. But that’s just him.

So the six of us do a toast to Cesar, our friend, from a sailboat on the lake he loves so much. I wish he was here.
Posted by Kristofor Olson at 6:44 PM