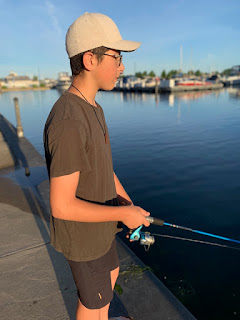 Magnus seems to have rediscovered fishing. Yesterday, he found this little black and yellow five of diamonds lure and used it to mercilessly slay fish in the marina. He caught bass, perch, and crappies, but nothing really big enough to keep. He told me at the end of the day that he wanted to get up at 6am to go fishing and I said I’d be happy to join him.

So, at 6am, we are up and out the hatch. I don’t have a Pennsylvania fishing license, but I don’t think kids under 16 need one so I leave the fishing up to him while I cheer him on. We could have used our dingy, but he wants to fish in the shallows right by the marina office, and he does catch a few, including a nice bass and perch, which I fillet for our evening dinner. It is so nice to see him enjoying himself and I tell him about my years as a kid in Saskatchewan where I did practically nothing other than fish and when I wasn’t fishing I was thinking about fishing. I remember one time at the lake when my cousin Jason and I went fishing but were catching absolutely nothing, so we threw a banana peel in the water and spent hours casting at this target, honing our skills. I loved fishing so much I even became a fishing guide and spent one summer guiding at Mirond Lake and then another summer at Wollaston Lake, catching giant pike and making lots of juicy tips from rich Americans. In recent years, my interest in fishing has waned, but I still love to do it when the opportunity arises.

At opening time I walk over to Bay Harbor Marina and find the mechanic Rich Ryan, who drops what he had going on after listening to my sob story, and comes right over to check out our engine issue. After a quick look with an experienced eye, he returns to his office and orders the necessary parts from the Yanmar distributor in New Jersey for next day delivery. He assures me it is not going to be a difficult fix and he has done this sort of repair before. Yes! And to top it off, he is a super lovely guy.

We call Tony and Angela and started putting together a plan since it is looking like we could potentially be back on the water tomorrow. They had made it to Cleveland so were going to hang around there for the day and then work their way down the lake towards the town of Vermillion. They own a big 36 foot power boat that we call the “Warship”. It has a fly bridge (like a second level that you can steer from) and a main salon so big they have a damn couch in there. They also have a nearly full sized fridge and big galley. I think we are the only sailors on Lake Erie that prefer to travel with power boaters - before we knew Tony and Angela we did most of our summer sailing trips with our buddy Andrew in his nice big Sea Ray. It does work out quite well. Whenever we pull up to the gas dock - us in a sailboat and our friends in a powerboat - I get to say, “Hey, I need to fill up on diesel, could you lend me a dollar-fifty?” And then laugh riotously as they dump another grand worth of gas into the tank. Of course when it’s a big travel day, we have to leave hours before the powerboat because we move so bloody slow, so when they hear us firing up Bella Blue’s engine at 3am, they think, “Ha, sailboaters….” and then roll back to sleep, stay in bed until 11, have a leisurely morning shag, eat eggs benny and fancy pastries for brunch, and still beat us to the destination. Sometimes they are already drunk by the time we arrive.

We decide to meet in Vermillion, Ohio as the marinas in the islands (our original destination before the engine kaboom)  are completely booked for July 4th festivities, as Ana discovers after a dozen phone calls. Fortunately, the marina in Huron, Ohio has slips available for July 4, so Ana books us in for that night while Tony and Angela get our Vermillion dockage sorted. The only thing left to do is get the boat fixed and that can’t happen until tomorrow so we have another free day in Erie, PA. And what a beautiful day it is - warm, humid and cloud-free. Oh, just remembered - Happy Canada Day!

The gang showers and then we walk for a mile or two over to Dobbins Landing - a popular tourist spot, and have a look at the boardwalk, tourist boats, and the charter fishing boats. The kids play a round of mini-golf while I wander over to the nearby Erie Maritime Museum - I place I’ve been wanting to visit for a very long time. I am a little underwhelmed with the place, but still enjoy it. The main focus is on the 1813 Battle of Lake Erie in which nine US ships (some of which were actually built in Erie) faced off against and defeated six British vessels near Put-In-Bay. Hard to imagine naval warfare happening on these lakes, but it most certainly did and shaped the course of history for both the US and Canada. 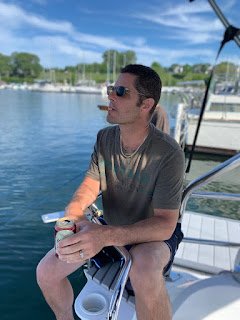 The four of us meet back at Bella Blue for lunch and an afternoon swim, followed up with a fishing. I drop a line and immediately snag into something big. When I finally get it in we realize it’s a sheepshead fish, and probably about 8 pounds, which is a good thing because the fillets from this morning aren’t enough for dinner. I grab a thin rope and hook it through its mouth and gills with a double granny knot, and then attach the line to the boat so it can swim around in the water until execution time. Stella comes out to see it and says, “Dad, I feel so bad for that fish. We’re not going to actually kill it, are we?”

“We sure are,” I reply happily, and then go down into the belly of Bella Blue to grab a cold Yuengling beer to celebrate my catch. As I’m down there Stella yells, “Dad, get up here! The fish is escaping!” Sure enough, I return to the cockpit to see a limp rope hanging in the water with no sign of my trophy catch.

“Did you liberate my fish?”

“What does “liberate” mean?”

“Like, did you untie the knots and let him go?”

“Seem strange you were just commenting on his chances of survival, and then he manages to untie my two granny knots and escape.”

Knowing that my daughter would never lie to me, I can only assume that either my knots suck, or that sheepshead was indeed smarter than the average fish. In any case, Magnus caught another one, nearly as big, saving the day, and I tied eight granny knots in the line and watched Stella like a hawk.

Ana and I take our cooking gear down to the fully stocked pavilion and get started on supper. I have a few more fish to clean, so the kids join me at the fish cleaning station to watch. I’ve never before cleaned a sheepshead, but it’s pretty much the same as any other fish, and I butcher off a couple of decent sized slabs and return to Ana in the pavilion while the kids play another round of corn hole. 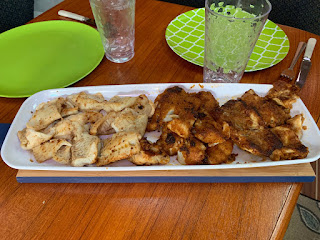 Dinner is soon served, and we have a magnificent platter of battered sheepshead, battered bass, butter fried bass, and butter fried perch. Stella refuses to eat the fish until we turn it into a game where she has to close her eyes and guess which one we place into her mouth. Everyone agrees that the battered bass is the best, but I like the sheepshead too as it is much firmer and has more of a chewy texture. It’s all delicious, and catching it yourself makes it even better. Halfway through the meal we do a short dedication to the fish that laid down their lives to nourish us humans. I think Stella liked that.


The kids and Ana fire up a movie around 10pm but I call it a day and head to bed, with my fingers crossed that everything will work out okay tomorrow.
Posted by Kristofor Olson at 5:27 PM