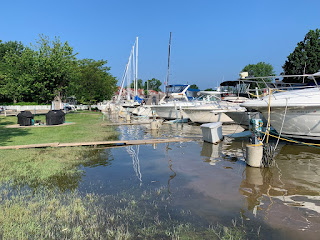 I beat my 2am alarm and wake up at 1:45 after a fitful sleep. Ana too is up and we check the weather to find there is a nice window for us to leave, so we throw off the lines and get back on the lake. The lake is choppy and windy and the skies are still dark with some sheet lightning in the far distance. So far we’ve done 57 miles of our journey so about halfway there. We are hoping the thunderstorms stay away so we don’t have to take refuge again.

I set the course on the auto pilot and Ana and I sit in the cockpit, watching the water and the sky, and chatting. There are no other boats to be seen, and at nighttime you can see boats from a very long distance away due to their red, green and white navigational lights. After a couple of hours I head down for a nap and Ana takes watch by herself. The kids were actually quite excited to be doing their first night watch this year, but since they are sleeping we decided to let them sleep - they will get a chance for an overnight watch later in the trip sometime.

I wake up just after 5am and take watch while Ana grabs some sleep. It is now raining and the water is rough, with the boat pounding on the waves. It is not easy to sleep in conditions like this, as every time the boat crashes down into a wave it feels as if the hull is about to break apart, but it never does. The kids, on the other hand, usually sleep like rocks on the boat, although this time they do get up once or twice to see what is going on. Stella wakes up for good at 9 but Magnus stays in bed for longer as he’s feeling quite sea sick. Both he and Ana get sick when the water gets especially rough, but Stella and I lucked out physiologically and almost never get hit by this.

In May I was doing some boat projects and asked Ana what she thought of replacing the cockpit shower, as the old one had completely fallen apart due to age, but mainly me not winterizing it properly.

“Why would we want to spend money to replace that thing? We never use it,” she said.

“It looks ugly the way it is and you never know, we might use it if it’s there,” I replied.

“I don’t know, sounds unnecessary to me.”

“It has hot water,” I said to her, reeling her in. A long pause. A raised eyebrow.

This morning the new cockpit shower finally delivers. The constant smashing of the waves makes it difficult to use the regular shower without being bounced around and bruised up. But the cockpit is much calmer and more stable. Ana whips off her clothes and heads back for a warm outdoor shower, done while seated right in the cockpit. It is so successful, and her results are so magnificent, that I get in there next and then Stella goes after me. Glorious.

We arrive in Vermilion around 1pm, later than planned, but safe and sound. Tony and Angela are there at the Vermilion Boat Club to meet us at the dock and we are so happy to finally see them! They look tanned, relaxed, and have made friends with a local boater who’s given them free access to his truck, so they’ve had wheels for doing chores and picking up supplies. 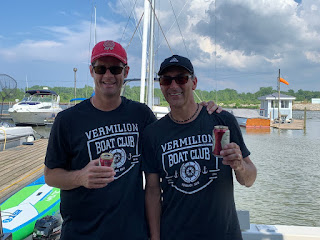 Vermilion is a beautiful little lakeside town, complete with canals, yacht clubs, quaint shops, and several waterside restaurants and bars. This year though, the high water levels on the lake have made a real mess of the place - many dock are underwater and the lake has creeped up to threaten many of the houses. We only spot one building - a marine repair shop - that is actually surrounded by water, but most houses have the water either lapping at their break walls or over it and consuming their lawns and gardens. The sidewalks of the marina we are at are completely underwater, as is half of the parking lot, and they’ve nailed together wooden skids for people to access their boats.

We have a welcome drink with the Henriques and then go for a walk downtown to stretch the legs after such a long trip. Many of the shops are the same as the last time we were here, but there are some new ones. Stella and I don’t last long in the heat and instead return to the club for a dip in the pool then the four of us jump in the dingy and cruise over to the Vermilion Power Boat Club where Angela and Tony are docked at to join them for dinner on the Warship (their boat model is actually a "Mainship" but she picked up her much cooler nickname during last year's boat trip) and catch up on the goings on for the past few eventful days.

After dinner we walk over to Linwood, which is an unusual little gated community (think Truman Show meets Brady Brunch), and get a round of ice creams from their old fashioned malt shop. We are just in time for the evening sunset show from the west facing beach so we watch the friendly sun drop down beneath the clouds on the horizon with a red pop and warm afterglow. 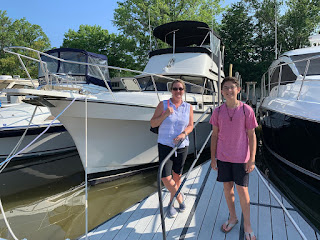 As our food supplies have dwindled, Ana and I walk up to the Giant Eagle grocery store while the kids head back to the boat with Angela and Tony. We get there 30 minutes before closing and launch into a rapid shopping trip, taking most of the aisle corners on two wheels and snagging items off the shelves at great speed.

Ana pulls up her Uber app, but there doesn’t seem to be any cars here. She also tries calling the local taxi company which goes directly to voicemail. We consider heisting the cart and disposing of it in the canal, but I’m worried the rattling ride back will cause my cases of beer to explode so Ana chats up a nice lady sitting in her car, waiting for her daughter to finish up her shift, and she offers us a ride back to the marina. Once again, Americans prove to be the best hosts and such lovely people, and we have a nice chat with them, although somehow to forget to ask them their names. I give them one of our fancy new boater cards (more on this later) so in case they do look up this blog…thanks again for the lift!
Posted by Kristofor Olson at 8:02 PM