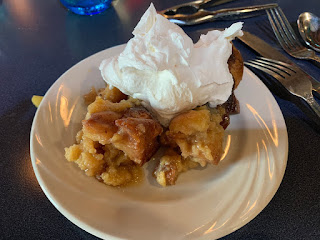 I need some exercise so get up early and go for a big paddle board ride up the river and dip into the shoreline to check out the damage from the high water levels. It is only 7am but already hot and headed up to over 30 degrees for today. We’ve only owned this stand-up paddle board for a few weeks but I’m very happy we decided to get one. My brother has had one for years and a sailor buddy at work is fanatical about them, so on the first hot weekend we had in Port Dover we found one on sale at the local marine store and picked it up. What  I didn’t know about stand up paddle boarding is that the stroke is very different than what you use in a canoe or kayak. The movement has everything to do with your core and each stroke is basically a full body crunch, whereas paddling in a canoe leans more heavily on your arms. Both Ana and I were hoping the kids would have latched onto it more, as they were initially excited, but they haven’t shown much interest yet. Hopefully it will come.

Before leaving on the trip I made three quiches to bring along, so after heating them up in the oven, the six of us sit down for a big breakfast and eat enough to probably get us through lunch too. Boat dining etiquette is a little different and you’re allowed to get away with things you never could at home - such as feeding your guests food that’s nearly or already past its prime - for example the blueberry muffins and cherries I put out with the quiche. Any food on a boat has a short life, so it’s constantly a race against time, and everybody knows it!

Stella and I go up the lawn by the office for a couple of games of corn hole, but it is already raging hot so we don’t last long. These corn hole boxes are made of concrete and very fancy, plus the bean bags are new and of equal size and weight, unlike the ones we were using back in Erie that smelled of wet dog and some were so empty of beans it was like tossing a piece of fabric.

Ana is calling every marina in Sandusky and strikes gold by getting us slips at the Sandusky Yacht Club, which is probably the best marina on the lake. She is so good at organizing things that sometimes I can’t even believe it. The club just celebrated their 125th anniversary so they have been at it for a while, and it shows. Besides the beautiful docks they have a big pool with an outside bar and dining area and a magnificent club house with a library, laundry facilities, showers, and a gourmet restaurant that serves incredible food and the most amazing bread pudding in the world - it truly is the stuff of legends. I sometimes dream about their bread pudding. We find out they are having a seafood and prime rib buffet tonight, so make our reservation for 7pm. It’s going to be huge.

The dock master assigns us slips right beside each other and we get tied up and electrified. It is incredibly hot again today and every surface I step on puts griddle marks on my feet. Instead of going straight to the pool or hunkering down in the air conditioned library like normal people we take a walk into town. Tony and Angela make it as far as the West Marine store where we browse around for a while in the AC, then they throw in the towel and head back to the marina. The Olsons continue on to downtown, where the girls go shopping and Magnito and I find a barbershops for haircuts. Magnus is at the age where he cares about his hair (that happened to me to around his age…but it quickly passed), so he is initially reluctant, but then reconsiders and gets the sides and back trimmed up, but leaves the top lusciously long and so thick that it resembles wolf hide. 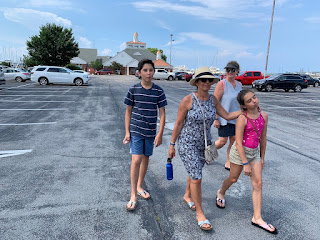 Before we melt into the ground like the evil witch in the Wizard of Oz, we scurry back to the marina and jump in the busy pool, while Ana makes trips back and forth to the clubhouse for switching out laundry loads, which has piled up after a sweaty week on the water. The pool water is not exactly cool, but it is refreshing nonetheless and we have a great dip.

It is soon time for dinner, so we return to the boats and since it’s a rather fancy yacht club restaurant, Tony and I try to figure out some way to fashion ascots, thinking maybe we could string together some of our wives’ underwear, but the mechanics of it overwhelm us, and neither of us have ever seen an ascot in real life, so all we have to go on is that red one that Fred from Scooby-Doo always wears. We give up after barely any effort at all and instead I put on a pair of jeans and a long sleeved linen shirt, which fancies me up miles beyond my normal boat wear of swim trunks and sunscreen.

The meal is beyond good. In fact, I’ve never seen a seafood buffet like it - they have lobster bisque, crab cakes, glazed salmon, grilled cod, scampi, white clams in wine sauce, lobster mac and cheese, mussels, fried popcorn shrimp, a boatload of fresh shrimp with seafood sauce, rainbow tapia fillets, and an endless supply of crab legs with melted butter. Beyond the seafood there is a long table full of bush (a.k.a “salad stuff”), which I avoid as that just takes up precious plate real estate, and a chef carving up thick, juicy slabs of prime rib with au jus and rosemary roasted potatoes. The whole thing is simply decadent and the food is delicious. Of course, there’s a of table of desserts, which include all sorts of cakes and sweets, but I go directly for the bread pudding, and load it up with fresh cream. It is heavenly. I eat a full plate of it, and consider going back for more but my stomach can’t take anymore. What a feast.

It is Friday night and there is a band playing at the pool bar so we all waddle clumsily over and plop down into chairs, like walruses, hoping they don’t collapse under the strain. It’s a husband and wife team and the husband Bob is a multi-instrumentalist playing guitar, harmonica, clarinet, flute, saxophone, and a couple of other instruments he didn’t even get to. Their setlist is a little crappy, but things pick up a bit when a small bow rider glides up the channel and into  the dock, right behind the stage, in front of a hundred people, and one of the girls somehow does an endo and flips over the side of the boat, ass over teakettle, splashing into the water. Fortunately she’s not hurt, but it takes a while for them to turn the boat around, get her into position, and then fish her out, fully clothed, and the damn boat is still not docked yet! The worst part is that the diving act happens right at the end of a song, so the band stops and everybody turns around to watch the spectacle. The one guarantee in boating is that the time you screw up the worst, and totally botch the docking process, will be when there’s a large group of people there to watch it. 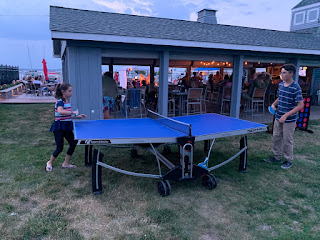 The band gets back on track and we stay for the set, including the finale where they play an incredible cover of Bob Segar’s “Turn the Page”. Bob is shredding on guitar, ripping it up, and his wife even has to back away a bit so she doesn’t catch fire. Stella dances with me, and there’s few things better in life than dancing with your little girl as she snuggles her head into your body and you sway back and forth together on a hot summer night.

The walk back to the boats gives me a moment that emblazes itself on my memory. I’m holding hands with my beautiful wife as the floating dock creaks beneath our feet. To the north, an amazing fireworks display is exploding from the rollercoaster park at Cedar Point in a shower of colour and light. To the south and west are menacing storm clouds, swirling around, enclosing the marina, with sheet lightening flashing behind the blackness, in stealth. Across the channel is a public park, and I can hear a baby crying and a dog barking and a mom and dad talking. I can still hear Bob Turning The Page, in a endless finale of bent guitar notes, wailing and moaning. Lastly, I feel and hear the wind passing by us, on its way somewhere else, carrying the sounds and smells of a great, Great lake.
Posted by Kristofor Olson at 11:05 AM