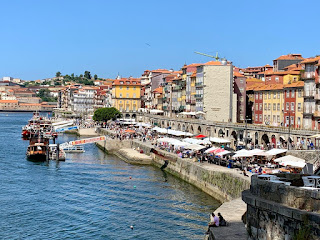 Porto is the second largest city in Portugal, and one I’ve wanted to visit for a very, very long time. We had originally planned to spend a night or two in the city, but when we realized that it was less than an hour from Aveiro, we decided to make a day trip of it instead.

We took the toll road right into Porto, and stopped for gas as soon as we found a station. A strike of the union that does fuel transport began today so it’s expected that fuel supplies may become tight, so we’ve been topping up frequently to ensure we have enough gas to get to Faro in the south, where our departing flight leaves from. The cost of fuel has been around 1.55 euro/litre which is approximately $2.25 Canadian - twice what we pay at home, which means you don’t see a lot of 4x4, dual axle, Hemi-engined trucks driving around with single passengers. None of them would fit down any of the narrow city streets anyway. If our governments had any huevos, they would jack up the carbon tax levels to European levels and get serious about tackling pollution and climate change and stop wasting our precious resources. But that’s simply not going to happen.

After driving up and down a few steep streets we found a parking spot and slipped our little Clio in with a shoehorn. Then we started walking, first to a church with an excellent viewpoint looking over the entire area. The river Douro flows through the city, splitting it into two parts - Porto to the north and Gaia to the south, both built on hills, creating a dramatic and epic scene when looking across the river from either side.

Our aimless wanderings began, and soon we came across a big transport truck moving slowly down the street, blocking all traffic behind it, while dudes were unloading guard rails and installing them on both sides of the street, trapping the parked cars behind them. Ana spoke to a street cop and he told her it was for a big bike race happening today, and if your car got trapped in, you weren’t going anywhere. We realized this same street was the one we were parked on, but the truck was approaching fast so we ran down the hill, jumped into the car, and peeled out of there just before they dropped in a gate, trapping the cars parked in front of and behind us. Close call! We drove down the hill, close to the river and found an underground parking garage. But you have to understand, the Portuguese are masters at building parking garages, because they always put them underground instead of the hideous above ground ones we usually build in Canada. This one was amazing - we drove in and it led to a single, downward spiralling path with unusually high ceilings and rows of densely packed cars parked on both sides. We simply drove down, deeper into the ground, until we found the first unoccupied spot. On the inside of the spiral was another spiral going back up to the exit. Simple, easy to navigate, brightly lit, and so well designed. 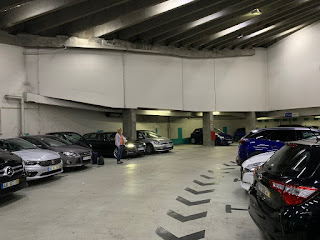 The Porto waterfront has an electric atmosphere - both working and tourist boats passing back and forth, two levels of restaurants, bars, shops and galleries along the waterfront, but somehow done in such a way that they are not prominent or imposing. There’s a large pedestrian area along the waterfront, with a sheer 20 foot drop into the churning water with no guardrails or warning signs of any kind; the cities here, refreshingly, do not tend to not take on the responsibility of protecting people from their own stupidity. Do you really need a sign warning you to not get too close to the edge, or to step off the tracks when you see a tram coming, or move out of the way of the street/pedestrian walkway when a car wants to pass through? Here, they have allowed citizens the dignity of using their common sense. 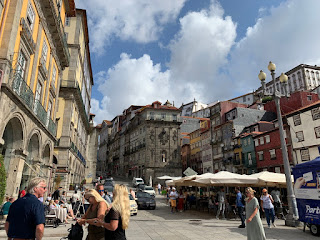 Despite giving up coffee a couple of years ago, it’s not a hard and fast rule for me, and I enjoyed a fragrant, steaming, hot cup of Americano as Ana had a tidy latte while sitting in a riverside cafe, watching the action unfold around us. If we lived in Europe, I would be back on coffee in a second as it’s such an integral part of the culture here, along with the delicious pastries that always accompany it! 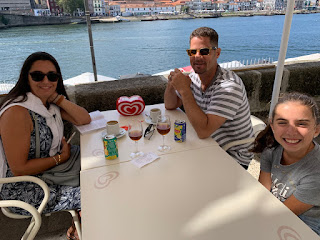 We walked across the bridge to the Gaia side and split up - Ana and the kids went to explore the shops and market while I went to the Taylor Fladgate port house for a tour and tasting. Gaia is the home of several dozen port houses, some that have been here since the 17th century. The vineyards are all located up the Douro, in the Douro valley, and during harvest time the barrels of wine would historically be shipped in boats down the river and unloaded right here for cellaring and transport.

The tour was fantastic, and the tasting at the end of two different vintage ports in the beautifully manicured gardens with peacocks strutting around was a nice finish. I would have loved to buy one of the hundred year old bottles of vintage port, but I’ll wait until one of my kids becomes a billionaire before I start upping my tastes to that level. 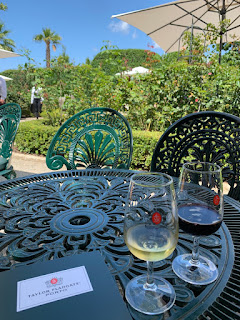 We reconvened and went for lunch at a place that was quite similar to the Time Out food hall in Lisbon, but smaller, then we walked back over the bridge to the port side to check out the bike race. As of yet, none of the leaders had reached the finish line, but as we stood there a rather ratty looking Portuguese elder on a beaten up bike came peddling down the lane with a buddy riding side saddle, both with smokes hanging out of their mouths, looking fresh from the local taverna, thoroughly enjoying their ride with a larger than usual crowd cheering them on.

Our walking tour took us throughout Porto, up and down the hilly, narrow streets, checking out shops and all the thousands of people scurrying around. The vibe was frantic, with the bike race (which we learned was the Portugal version of the Tour de France) and the massive crowd of thousands waiting at the finish line. We missed the finalists coming in, but were on the path for some of the later finishers, who each got cheered in by the enthusiastic crowd. It was very exciting.

It was nearing the end of the day, so we returned to the car and drove west to the beach area and went for a long walk along the promenade. There was a Portuguese sludge metal band playing a free show in a gazebo, next to a market, so I watched the show while the gang checked out the stalls. They were surprisingly good, and I was pleasantly shocked that a metal band was playing in the park on a Sunday. On the waterfront there was a raised rock pathway, maybe four feet wide, with no barrier stopping you from falling down the fifteen feet to the jagged and treacherous rocks and ocean below. And you know who was daringly walking on this treacherous pathway? Little kids, families, people riding bikes, couples in love, dogs, and even an elderly pair of friends out for a sunset walk. Nobody fell in, and everybody was having a great time. The four of us sat on the ledge with our legs hanging down, discussing the likelihood of an Apple iPhone surviving the drop, and how one would go about retrieving it, which seemed unlikely. 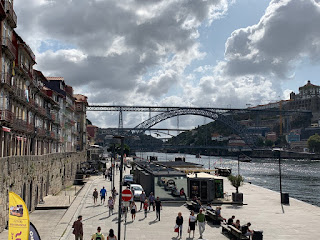 A thought was given to having dinner here, but we decided to head back to Aveiro instead, and along the way Ana did some research on restaurants and found the highly rated Batista do Bacalhau, which we eventually found in a residential neighbourhood after twisting and turning through a dozen roundabouts and tiny streets, having no idea where in Aveiro we were.

Although the staff were enthusiastic and the venue was decent, the meals just weren’t that good. I ordered the cod house specialty, expecting it would be some sort of casserole, but instead it came out as a dry, baked cod fillet, standing in half an inch of olive oil with chunks of raw garlic and raw onion on top. The cod was ok, but that’s all there was to it - no spices, no pepper, no pimiento. And worse, the raw garlic was stingingly powerful and the one piece I accidentally ate caused me to reek of garlic the entire next day. Ana and the kids meals were ok, but not great, so we were disappointed. Cod is just not the sort of fish that should be served as a fillet - way too chewy. 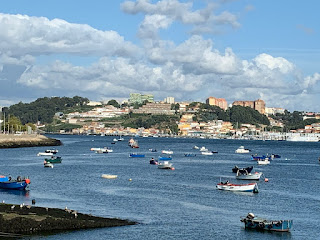 But there was a huge treat after dinner. We had ordered a bottle of Portuguese white wine (vinho verde) to share but Ana only drank about a glass and a half and then started topping me up, so by the end of the meal I wasn’t feeling too capable of driving. Fortunately, we realized that our house was only about three blocks away, so Ana agreed to drive the manual transmission car home. Ana does know how to drive a manual, but she doesn’t like it because one time in Saskatoon she was driving my mom’s manual car and got stuck on a hill and couldn’t get the damn thing moving. It traumatized her severely.

So we all got in the car, buckled in, and let momma take us home. I gave her a quick briefing, saying this car had a very forgiving transmission, was easy to drive, and otherwise reassured her how fun and simple it was going to be.  She stomped the gas, popped the clutch and we lurched out of the parking spot, but then stalled out right in front of the giant window, with the patrons looking out from the restaurant. She started it back up and tried to go but it stalled out again.

“No you’re not, hit the goddamn gas pedal” I yelled back.

She gave it gas, but not enough, and as she released the clutch the car started jerking forward erratically, then stalled. And this horrible, burning smell started to waft into the car, which really heated things up.

“Give it some goddamn gas!” I said, “Or don’t let the clutch out so fast. One or the other. The damn car is burning up!”


“Floor the goddamn gas now. Then pop the clutch!” I urged, which she did, and the car lurched forward, leaving two black skid marks on the asphalt, but getting us successfully out of the vantage point of the patrons, and out of earshot of their uncontrolled laughter. I started to think that me driving slightly drunk might have been the better option, but nonetheless, we made it home just fine and Ana swore (for probably the 9th time in her life) that she would never drive a manual transmission car again.
Posted by Kristofor Olson at 3:31 AM