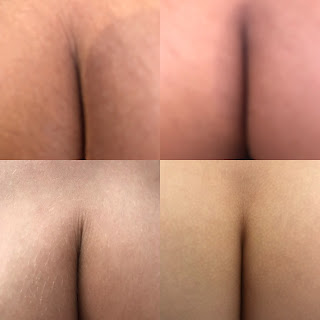 The contrast from yesterday’s busy streets, thousands of tourists, racks of merchandise in front of the shops, restaurant chairs and tables everywhere, and this morning’s calm emptiness I encountered during my walk was stark. It was so quiet. I walked for a good while and then went down to the car to fetch the huge bag of pears that the neighbour in Aveiro had given to us so that I could put them out at the hotel coffee bar for the rest of the guests to enjoy, as there were far too many for the four of us to eat. 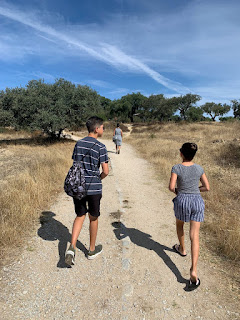 After an amazing breakfast at a restaurant right beside our hotel called The Bakery Lounge, we jumped in the car for a tour of Evora’s surrounding attractions, which seemed to be mainly archaeological in nature according to the guidebook. We drove out to the first location, which was a burial mound and chamber, and it was located at the end of a long dirt road that led through a cork tree plantation so I was finally able to get up close to one of these amazing trees. Magnus and I managed to chip off a few pieces of cork bark to take home for a souvenir. The kids weren’t too excited about the burial chamber, but it was like Disneyland compared to the next site, which required a kilometre long walk through the swiftly rising heat, and ended at a single rock sticking out of the ground. 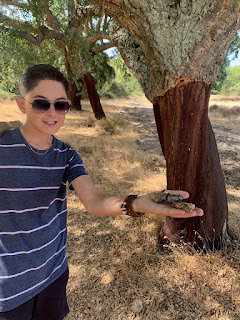 “What a waste of time!” said Magnus.

“Snort up the culture folks, this is probably a very significant rock to those that know what they are looking at,” I said.

But they probably didn’t hear me because they had all returned back down the path and I was left standing there by myself, so It took a picture of the rock for no good reason. 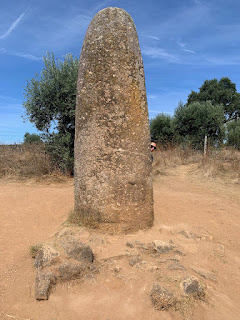 The next site, a few miles down the road, promised to be slightly better, but it wasn’t easy convincing the kids to leave the car, until we saw a sign that indicated there was a gift shop and interpretive centre near the site. So we all walked over, and didn’t find any sort of gift shop, but we did see a whole bunch of rocks, set up like a mini Stonehenge, and it drew a very limited level of interest from the family - we stayed for at least five minutes. Upon leaving, better inspection of the sign advertising the gift shop led us to the realization that it was located in the nearby town of Guadelupe, but the kids thought we had scammed them. 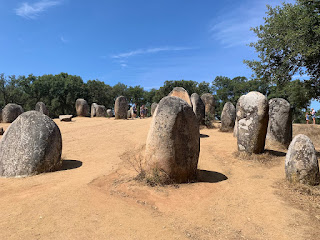 Well, there was only one stop left on our culture mission, and that was the town of Arraiolos, known for its carpet makers. In short, we drove the 20 kilometres to the town, visited a crumbling castle on top of the hill, found the carpets to be a little lame, had coffee and pastries, and drove straight back to Evora, where everybody was once again happy to wander the streets and hang out in cafes. 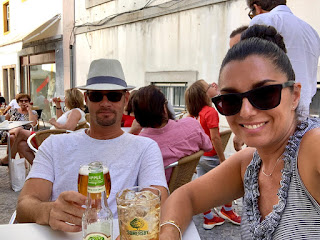 During dinner we played a fantastic new game called “Find the Butt”. Magnus took close-up photos of various cleavaged parts of our bodies (bent elbow, bent knee) and we had to decide which one looked most like a butt. It is uncanny how butt-like some of the photos were. Magnus wanted to take pictures of our actual butts, but we decided that fell beyond the limits of good table manners, so instead we took them back at the hotel room. Can you guess which one is the real butt?
Posted by Kristofor Olson at 10:49 AM