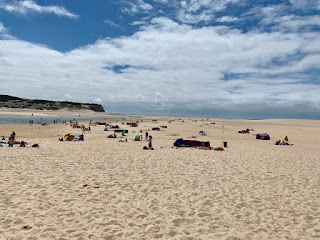 I’d like to know why I’ve already heard four Bryan Adams songs on the radio as we’ve been driving around in Portugal. The radio disc jockey, also known as “The Computer”, even decided to queue up a Nickelback song right after “Summer of 69”. How appropriate. But it makes me wonder why on earth they are playing this stuff in Portugal when I am quite sure they do not have any Canadian content rules like the ones we are stuck with back home. Perhaps there just aren’t enough old crappy Portuguese pop songs to fill the daily setlist on the FM nostalgia stations?

It was another massive sleep-in day as I didn’t get up until 8 and we didn’t leave the house until close to 10 as Ana burst into a round of laundry right after she woke up. I didn’t think we’d have much for clothes to wash by this point in the trip, but I am a grub and rarely change my clothes on holidays whereas Ana changes her clothes daily and Stella multiple times a day as she considers herself to be some sort of fashionista. Magnus lands somewhere in the middle.

We returned to Peniche to see it in the daylight and to visit the waterfront military fort (Peniche Fortress) that had been used as a prison for many years. Magnus said this would be an easy place to escape from, and I told him no way. Then one of the displays had details of the half dozen successful prison escapes that had happened over the years, both with and without subversive prison guard assistance. These kids have been proving me wrong way too often recently.

The old town centre of Peniche was nice, but a little gritty. Magnus and I looked around for a barber, as we’d done in every town in Portugal so far, finding either no shops, shops closed for siesta, shops that didn’t chop dudes, or shops with no available spots. We were starting to look like Shaggy and Scooby. Ana was busy trying to find some gold bling bling for her goddaughter Nina, but she struck out too. We left with not a great impression of Peniche, especially after Horacio told us last night that the local marina where he used to moor his sailboat is falling apart from disrepair. And Olivia told us that it has become overrun with foreigner surfers who are squeezing out the locals. So our vote for best local seaside hang-out definitely goes to Areia Branca which is such a lovely place. Saying that, we did drive out on the Peniche peninsula and found some spectacular rock formations and ocean views. 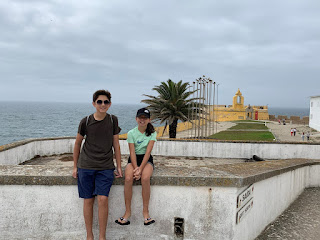 Our next destination for the day was Foz Do Arelho, which is further north up the coast from Peniche, and a place we thought would make for a nice lunch spot. After driving around for a bit through the town we eventually found the massive, and I mean massive beach, with a river running through it terminating in the ocean. The beach was so big it looked like a desert and was growing by the minute because of the falling tide. After a pretty terrible lunch (imagine eating a poor quality beef steak with veins of tough fat and gristle that you need to saw through with a knife…and then imagine trying to chew through that same piece of meat in a sandwich) at one of the many restaurants overlooking the beach desert, I slipped into my swimmers and went for a fast dip in the salty river water. The rest of the gang opted not for a swim, but Ana and I did go for a long walk along the river all the way out to the ocean, which was probably over a kilometre. I was kicking myself at the end for not bringing a camera along, because when we looked back over the river towards the shore, it could have been the Whitsundays in Australia, as the draining water had created sandbanks throughout the river with blue patches of clear water surrounding them. Many people were swimming in the water, or just wading across it, while others were scattered about the sand sunbathing, but the area was so huge that it still felt empty. 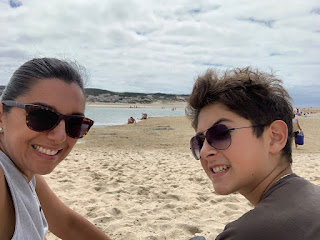 Caldas Da Rainha was the next town on our itinerary, mainly because Magnus’s internet travels discovered a Magic The Gathering card shop that opened at 4pm so we drove directly there for him to buy a package of cards. The town had also been recommended to Ana by compadre Rosa as a good place to shop. Well, we had trouble finding the old town centre so instead parked near a giant central park and shopping mall so the ladies went shopping while Magnus and I walked the park. Both were a little underwhelming, but we still enjoyed the stop.

The waterfront of Areia Branca is where we ended up for dinner snacks at Solmar restaurant and to once again enjoy the amazing ocean views. Today the water was far too rough for surfers, so all the young dudes we saw surfing the other day were instead working at the bar! The Solmar menu was fantastic as they had all sorts of cool seafood options like clams, mussels, octopus, and fish, but also tremendously good chicken wings. We latched into some food and I had my first caneca of the trip, which is a giant mug of beer, half a litre in size, and man was it good. Because I’m the only driver listed for the car insurance, I’ve had to mostly behave myself during the day, and I’ve been too beat at night to enjoy much of the cheap Portuguese wine and beer. There is a strong likelihood I could make it to the end of the trip without even a mild hangover…which is probably a good thing for this aging body. 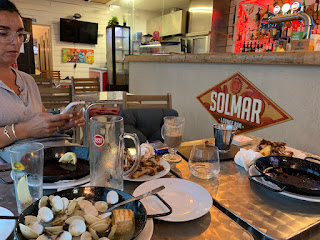 A few shops down from the restaurant was a nightclub that, for some reason, also sold ice cream and something called “bubble waffles” which the kids coerced us into buying for them. Because it was still early there were no customers so the server had plenty of time to make this huge bubble waffle for the kids to share. They inhaled it like homeless kids with a sweet tooth, and there was not a piece of waffle, ice cream, fruit, or M&Ms by the time they were done. I’m surprised they didn’t eat the paper bowl it was served in.

Tomorrow, we move from Paco (and this amazing region!) to our next destination - Aveiro.
Posted by Kristofor Olson at 6:14 PM