Let’s all go to Portugal and start necking! 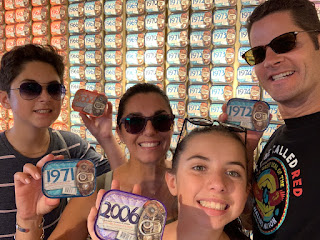 You know what the best thing is about going to Europe? It is the step back in time and being surrounded, at all times, by ancient history - but history that is still relevant today and shapes happenings in Europe and the entire world. It is returning to one’s homeland, or near to ones’s homeland as the majority of Canadians are still of European descent and the continent of Europe is truly not that large geographically; especially for European Canadians so no matter where in Europe you visit, it’s likely not far from where your family originally came from.

My first trip to Europe was at the age of 23 and since then - and especially since meeting Ana - a second generation Portuguese, I have never felt completely comfortable in Canada again. I write this not to sound arrogant or unappreciative of my home country, because I love being from Canada and I love living there (well, maybe not during the winter so much..), and I love the incredible natural landscapes and the well-ordered and safe society, and even those loony Quebeccers. But after spending time in Europe, I learned that many of the values that were instilled in me growing up in Saskatchewan, such as the importance of family, working and living in a harsh climate, and striving for humility are true European values, and these were passed onto me, my brothers, and my cousins by Swedish grandparents on one side and Icelandic grandparents on the other. And then I met Ana, and the Portuguese culture became part of my own culture, and our family’s culture, and brought with it a whole new angle - honour, tradition, and love and respect of the sea and its incredible bounty, especially whaling. Well, maybe not whaling, but definitely everything else. So every time I visit Europe I really feel at home.

Today, we arrived in Lisbon Portugal, and although we have been to the Azores several times, we have not visited continental Europe for many years, probably more than 15 by my count. So we were long overdue for a trip, and so incredibly excited for this one that the only thing that saved us from total agony were the busy weeks at work leading up to our departure.

We arrived at 11:30 am after an overnight flight from Toronto, that was especially good, starting with the check-in staff pulling us up to the front of the line because we have “kids”, although I hardly consider these two teenagers as kids anymore, but in Portugal it’s always families first. We left on time, landed on time, and everything in between was peachy.

The first taxi ride in any country nearly always hits you with what I call the “tourist tax” because they inevitably rip you off, or at least try to rip you off, knowing you are a foreigner and probably aren’t familiar with transport prices. After confirming with our taxi man that the meter was king, we arrived at our Air B&B in the Alfama district with a 10 Euro charge showing on the machine but were told about the “weekend premium” that jacked the price up to 30 Euro.

“What, didn’t the airport staff tell you about the weekend premium?” the driver asks.

Our Air B&B host had told Ana the taxi ride should be 20 Euro or less so she threw him a 20 and said, “Sorry, that’s all we’re paying.” Judging by his lack of aggression, he did just fine on that transaction and we considered our tourist tax paid in full.

We surveyed our cool, groovy little loft, got unpacked, had quick showers and were out the door, ready to explore. To rapidly acclimatized ourselves to the European big city prices, we stopped at the Copenhagen bakery just down the street and shelled out 12 Euro ($18 CDN) for a coffee and three small orange juices - ah, that feels better. Since we hadn’t yet picked up a SIM card for Ana’s phone, we were internet-less and had to navigate old school using our senses and guesswork, which really is the most exciting way to do it, and after asking around, found an amazing old church called the Monastery of Sao Vicente de Fora, and behind it, a local flea market, where they were selling all sorts of cool stuff - used screwdirvers, ladies dresses, LPs (I was tempted to buy my brother-in-law an old King Crimson album, but sadly our luggage capacity is severely limited), handicrafts, bootleg DVDs, handprinted Portuguese tiles, stuffed animals, and - my favourite - boxer shorts that had a monkey stamped on the front exclaiming “Say Hello To The Big Banana!”. You know, that kind of stuff. After perusing the junk piles we stopped at a small cafe for a round of Tosta Mistas (ham and cheese buns) and my first beer of the trip - a Super Bock that was Super Cold and Super Good. 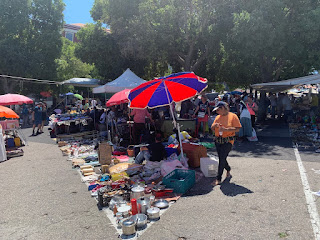 We had all started to get a bit grumpy from the lack of sleep and the heat of the day, but that touch of food and drink fixed us right up, so we wandered around in search of the city centre, taking a few wrong turns, but eventually popping out right where we wanted to be, in the middle of the Baixa area, where all the action is. Surrounded by magnificent buildings on all sides, we wandered around, checked out a few shops (including a sardine shop that had thousands of tins of the smelly creatures, each stamped with a year so that you could get a can from your birth year), watched people, poked around, and made our way right to the shores of the Tagus river where we enjoyed an ice cream and I kicked off my flip flops to stand in the delightfully chilly, and suspiciously brown water for a spell. 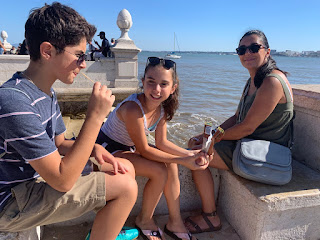 Our wanderings then took us by an electronics shop, so we went in to see if they had cell phone packages, and they did, but not exactly what we were looking for. But they did have exactly what Magnus was looking for - fake Apple Air Pods, or as Stella calls them, Fair Pods (fake air pods) or Care Pods (counterfeit air pods). We had given the kids 30 Euro each for the trip and Magnus just cannot stand having money in his pocket so he had to get rid of it as soon as possible and new headphones were just the ticket. How long they will last, nobody knows. 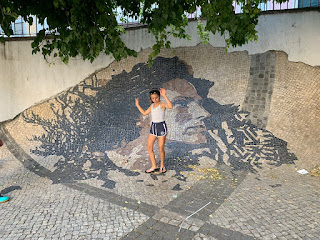 Around 6pm we decided to head back to home base, so we went to take the famous #28 electric trolley, but the queue of tourists was a European kilometre long, so I checked with a tuk tuk driver (yes, they have tuk tuks in Lisbon - a relatively new option on the transportation scene) but instead of the two dollars they charge in Cambodia for a 60 mile journey, this dude was asking for 20 Euro for a five minute drive, which just shattered our minds, so we told the kids it would only be a short walk home - but didn’t mention it was a mostly vertical walk. We found a staircase that stretched as far as the eye could see and Stella nearly bailed out, which was bizarre, considering she has the strongest legs in the family by far, but once she got going she sprinted the stairs and dusted the rest of us. We arrived back at the loft, covered in sweat and big city grime, and then Ana and I were overcome by an accidental nap while the kids hooked up to the wifi and did their thing. 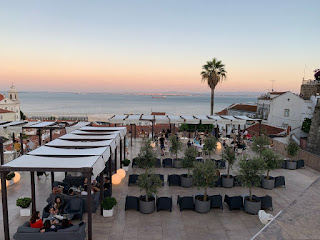 The nap was a highly risky move, but we woke up, splashed some water on our faces, and went back out for dinner. The temperature had cooled and it was a glorious, perfect evening. There were at least a dozen restaurant options near our pad and we finally settled on one outdoor patio after browsing though several menus and fighting off the restaurant prospectors who stand in front of their businesses, coercing you to come in as you walk by, which sort of gets on my nerves, so I decided right then and there that in the future I will place some bits of sardine spine right on my cheek, and a good number of sardine scales on my lips, so they think that we’ve already eaten. Yes, clever, I know - us veteran travellers know all the tricks, no matter how ridiculous they make us look.

Our meal of paella, bife da casa (french fries, salad and a thin sirloin steak with a runny fried egg flopped on top), cheese pizza, and bolognese pasta was ok - but what really impressed me was when I had sat down and noticed that a Justin Bieber song was playing, the waiter immediately caught my pained grimace, and said, “No problem sir, I will change it!” then axed the Biebs and cranked up some skanky reggaeton setlist that was just perfect.

During the walk back, we talked about the day’s events and Magnus mentioned seeing a couple making out in the airport, then we all admitted to seeing random acts of kissing throughout the day. The capitalist in me took the cue and said, “Well if the damn Portuguese spent more time working and less time necking then their country would’t be such a socialist economic basket case” but then the romantic in me punched that first guy in the face and said, “What they hell are you saying you moronic old crabby man,” and I kissed Ana right there and grossed out the kids. Canada could use a whole lot more public necking so we’re going to start practicing right now and bring the idea home for all of our friends.

Our flat (which was a loft right on the top floor) was still quite bit hot so we cranked open the windows and all hit the bed by 11:30. Despite the five hour time difference, we all managed to get to sleep after only a little bit of insomnia panic. With day one under my belt, I was feeling ready to really jump into the trip tomorrow and see what this place is all about.
Posted by Kristofor Olson at 4:18 PM