Let’s Go To Horacio’s For A BBQ 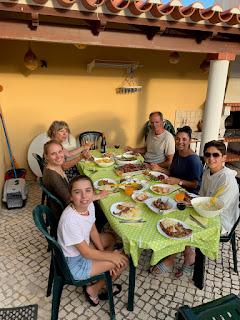 I dragged myself out of bed at 8 and the rest of them slept for at least another hour. Because we kept the window shutters closed at night, the bedrooms were completely dark in the morning, making it more difficult than normal to get up and going. Our compadres’ house is fantastic and seems to be stocked just as well as their normal home with everything you could possibly need, so my solo morning routine was great - boil water in the kettle, make some tea, grab a seat in the comfy couch and then start typing. One of the things I love about the concrete construction of the homes here is that everything is so solid and rigid. The doors open and close perfectly, the windows have a tight, perfect seal, and there’s no creaking of loose nails on any of the stairs when you walk up and down them, so when I’m creeping around in the morning I don’t disturb anybody. The water heating systems are all the on-demand variety so there is no need for hot water heaters, and there is also no need for furnaces with the temperate climate. It is a shame that Artur and Rosa get to spend so little time here, but I bet their trips will get longer and more frequent in the coming years.

Today’s first destination was Obidos, an ancient walled city located on a hilltop, less then 20 minutes from home base. We’ve been using Ana’s phone for navigation, but the computer generated voice has been having more than a little difficulty with pronouncing the street names and they usually come out as an unrecognizable, scrambled mess. It doesn’t help much when the street names are so bloody long - how about “Rua Padre Jose Rodrigo Paula do Rossio” or “Rua Joaquim Dos Santos Borda D’Agua” or “Avenida Doctor Francisco Vale Guimaraes"? Of course, there are hardly any street signs showing the names, as the street names are usually painted on tiles on the nearest house to the corner. But when the odd street sign appears, there’s no way to fit the full name on the sign so they they have to abbreviate it to the point of comedy. What do you make of “Av. Dr. F V Gu”? It’s no wonder the artificial intelligence voice stumbles. But at least they add a few gaps into the street names - its much worse in Iceland where they wallop you with street names like Svalbarosstrandarhreppur. Good luck Siri.

Because of our later start we arrived in Obidos at prime tourist time and the busses were already releasing their payloads of snap-happy passengers through the main city gate. From afar, the city looks big, and almost dreamlike and unreal, but when you get up close and into the city, its size diminishes and you can walk straight across from wall to wall in just a few minutes. Ana found a local woman and struck up a conversation and discovered there are only about 50 people who actually live in the city and, up until about 15 years ago, there were no tourists here, so she didn’t mind having all the visitors as it livened things up a bit. 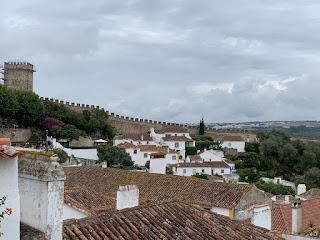 The walls were high, and had a nice walking path on top, but were closed because of work being one on them, which was too bad as I would have liked to do a full loop and imagined myself with a crossbow taking pot shots at the tourists below, both inside and outside the protective walls. Ana was completely mesmerized with the city, and was able to look beyond the throes of tourists better than me, but I did find it fascinating imagining what it must have been like living here hundreds of years ago when the walls were probably the difference between life and death. It was impossible to not compare this place to Game of Thrones or any of the other movies about life during the medieval times. It really put me in the mood for skewering an enemy. 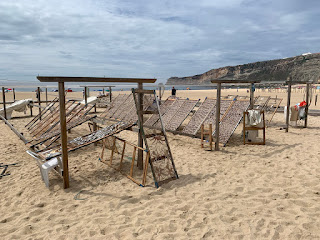 Our next destination was the seaside town of Nazare, famous for the enormous surfing waves that appear here during the winter months. Ana’s been particularly fascinated with this town after seeing images like the one attached here, of a guy named Garrett McNamara surfing a hundred foot wave in 2013, thereby opening it up to the international surfing scene. We drove into the town centre and it was a madhouse of congestion - people and cars everywhere, and we had to circle for a long time to find a parking spot. Once a quaint little fishing village, Nazare bears no resemblance to its past and is a clusterfrick of cheesy tourist seaside drivel. For example beach activities included bumper cars, bumper boats, real life Angry Birds catapulting, bubble soccer, go-karts, and of course dozens of bars and restaurants. The only genuine thing I saw were racks of drying fish, and three old ladies trying to sell these leather fish snacks to tourists. Saying all that, the beach itself was expansive and beautiful, and the area was rimmed by an impressively high cliff that nestled in the town and made it feel a bit homey. There was a lovely boardwalk and a wide bike lane for moving up and down the beach. We did a short drive to the north of the town where the big wave surfing happens, but the ocean was calm so there were no waves to be seen, although there were still thousands of tourists there and plenty of infrastructure to serve them. 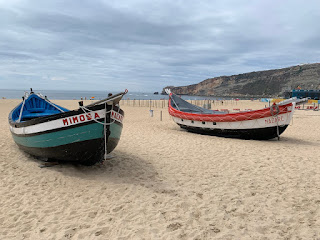 For what it is, I think Nazare is a pretty cool place if that’s what you are looking for. We were just a little surprised as we honestly didn’t do a lot of research on the town beforehand so were expecting something completely different. 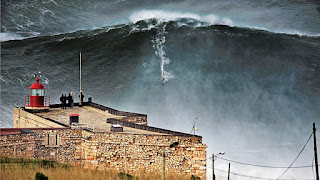 We returned home for a short chill out session then went back out for a dinner date at our friend Horacio’s house in Areia Branca. Horacio’s brother Cesar is a long time friend of ours who passed away just a few weeks ago, and we had hosted the entire family at our house for dinner the year before, so Horacio had insisted we give him a call if we were ever in Portugal, so that’s exactly what we did!

Horacio’s partner Ana greeted us and introduced us to their longtime German friend Olivia, who was living in Areia Branca for the summer attending surfing school. They cooked up an amazing dinner of various cuts of pork (seemed like half a pig) cooked over their charcoal grill, chicken, salads, rice and bread and we enjoyed such a lovely evening getting to know each other over glasses of wine and great conversation. It is always such a treat when you have the opportunity to visit a local’s house when you are traveling, as you get a short glimpse into what life is like. I only wish we had more time together to visit, but hopefully we will see them again sometime soon.

It was just after 11 when we returned back to the house, exhausted yet again after another big day in Portugal.
Posted by Kristofor Olson at 5:03 PM