Let’s Go To Spain For Lunch 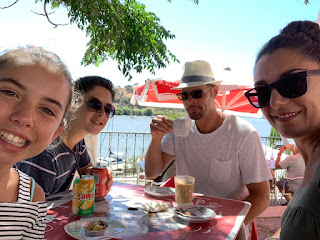 Overnight the blistering 37 degrees dropped right down to 15, making for a lovely sleep and a cool morning. Breakfast was served at 8am - another kingly feast, but today it also included fresh figs picked that morning, omelets, and scones. We bid goodbye to our hosts, and to our farm animal friends, and set off south to the Algarve for the final two days of our vacation. Helena again gave us a recommended route, which we happily followed after the amazing day we had yesterday. 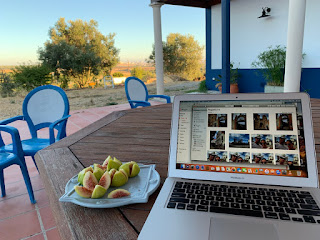 The first stop was at a town called Mertola, in the middle of a protected natural park. It had all the regular stuff - an Arabic mosque converted to Christian church, Roman ruins, and of course a castle on the hill with sweeping views over the town and Guadiana river which somehow had two large cruising sailboats anchored in it, which I found strange as we were still 40 or 50 kilometres from the coast. We took some time to wander around the old town and then through the castle, which was only partially intact, but quite interesting. 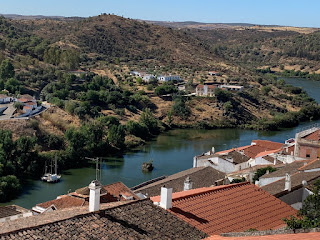 From here we continued on our way to Acoutim, and discovered a lovely little riverside town, with a mirror image town across the river (which also served as the border) in Spain. Here there were dozens of sailboats, and after looking at a map of the area I realized this was the very same Guadiana river that we saw in Mertola and it ran all the way into the Atlantic Ocean and was navigable by boat for at least 50 kilometres. As we enjoyed a coffee at one of the riverside cafes we made a mental note to add this potential sailing adventure to our bucket list. 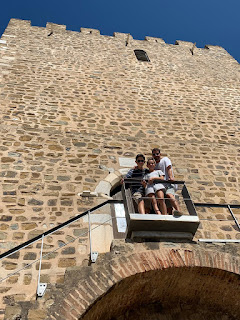 As it was after 1pm, we decided the best move at this point was to have lunch in Spain so we boarded the little ferry and as we started across the river Stella said, “Let’s set sail to Spain!”, which took all of about 90 seconds. The town on the Spanish side is called Sanlucar de Guadiana. There wasn’t much to the town, but we did have a short walk around and then sat down at the riverside restaurant for lunch, which was delicious, and interesting as we were now surrounded by a bunch of crazy Spaniards speaking their rapid, machine gun fire Spanish. It was fun all around. 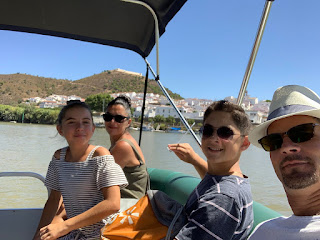 The ferry returned us to Acoutim and we continued along our way to the Algarve, which is the southern-most region of Portugal known for its beaches and beautiful weather. Ana and I have been to the Algarve region twice before, but probably almost 20 years ago so neither of us could remember much of anything. We drove along the coastal road, which isn’t actually a coastal road since you can’t often see the ocean, and found it to be quite…ugly. There were a lot of industrial areas, closed shops, graffiti walls, traffic, and not much of anything that looked interesting. We drove right to the biggest city in the Algarve - Faro, stopping only in the town of Tavira to see if there was a beach we could easily check out (there wasn’t).

We arrived at our apartment block on Amelia Rodriguez street, which was very near to the Faro international airport and our host was able to remotely open the doors to get us into the building and apartment. It was a very new building and the apartment was pristine so we got ourselves unpacked, had a short chill-out session, then decided we needed to get to a beach for a swim as it was still hot outside, but nearly as hot inside. 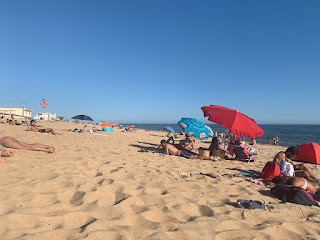 The only nearby beach you can access by car is the Faro Island beach. There are others, but they are located on islands that you need to ferry out to. There was a massive number of cars trying to get on the island on the single lane bridge so it took a while to actually get across, then once we were there it was another half an hour before we found a parking spot, and that was worth a happy dance. 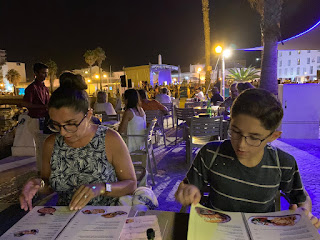 The beach was hot, the water was cold, and we happily spent two hours there enjoying the heat of the day right up until after 7pm when we packed up then stopped for a quick drink at one the dozens of beachside cafes, before returning to the apartment for showers. I could have easily collapsed on the bed but we weren’t done yet. We drove into Faro for late dinner and found a juggernaut of activity - restaurant patios full of diners, cafes, bars, a night market, live bands playing, and people everywhere. This is clearly a party town and everybody was out for a big Friday night. We opted for a pizza joint beside the marina and sat back and enjoyed all the activity going on around us. I think it was around 11 when we returned home, completely wiped out after a huge day.
Posted by Kristofor Olson at 7:05 AM