The Chapel of Bones 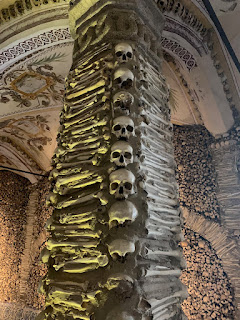 I wasn’t looking forward to the drive to Evora, our next destination, in the southern region of Alentejo, as it was going to take over three hours and trying to drive without falling into all of my sloppy Canadian driving habits is hard work. People here are great drivers, despite what I’ve read about the Portuguese being maniacs on the road. We have seen no evidence of that at all. What we do see is disciplined highway driving where you never move into the left fast lanes unless you are passing somebody, and then you immediately move back over to the right. The speed limit on the toll highways is 120, what it should be, but people can drive faster than that because everybody follows the rules and you never have a jackass driving 80 in the fast lane, causing people to pass at high speeds on the right, which is what happens in Canada all the time, making the highways much more dangerous than they need to be.

One other interesting thing I’ve learned is the reason for the random pedestrian traffic lights I’ve seen around that seem to turn red for no reason. When we visited our friend Horatio back in Areia Branca, I asked him about this and he told us that these light are linked up to a speed camera and will turn red if you are driving over the limit. What a brilliant idea and a great way to limit speed! Drivers in a rush hate having to stop at a red light, so put the decision in their hands - if you want to speed, then you’re going to have stop and hold up a bunch of cars behind you. If you follow the speed limit, then you can carry on without stopping. The only problem for visitors such as myself, is that there didn’t seem to be any signage explaining what these traffic lights were used for.

The drive went better and faster than I expected and we arrived in the walled city of Evora just after noon. On the way in we spotted a guy on the roadside selling figs, so I said “Hey what do you figger, should we stop for some? I bet they are figging delicious!” I waited for laughter from the back seat, but both of the kids had earbuds in and Ana wasn’t paying attention so I had to enjoy the joke myself. We pulled over, but the guy told us he could only sell them by the crate…for 6 euro. I love figs, but don’t think we’ be able to get through an entire, ridiculously low-priced crate.

The so called “hostel” that Ana had found for us was more like a hotel, and located right in the middle of the action, near the main square, in a perfect location. Like Obidos, Evora is an ancient walled city, but much larger, and has a population of over 50,000, at least half of whom probably live within the walls. Not surprisingly, the entire city is a UNESCO world heritage site. 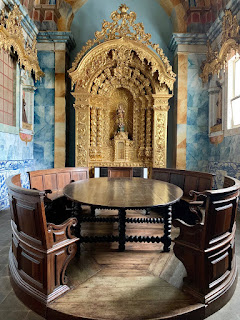 The church of Sao Francisco, originally built in 1376, then rebuilt several times after that, was the first place we visited and held some real surprises. The Chapel of Bones, is a chapel added in the 17th century and the entire interior is adorned with the bones of over 5,000 monks. Pure heavy metal, but originally built to “encourage reflection on the transitory nature of human life” as the brochure says. The creepy inscription above the vaulted doorway leading into the chamber translated into something like, "Our bones here, for yours we await." 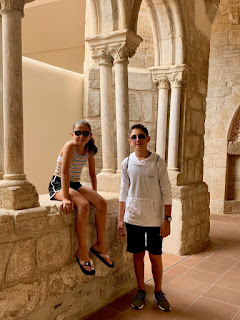 There was also a museum, dedicated to the Franciscan order of monks who originally used this building as a monastery, and it held many works of art such as paintings, sculptures, and tapestries. On the upper floor was a collection I had absolutely no interest in...until I actually saw it. It was a collection of Nativity scenes from Portugal and many other countries, and there were hundreds of them, made from so many different materials, from clay to ceramic to marzipan to stuffed fabric. 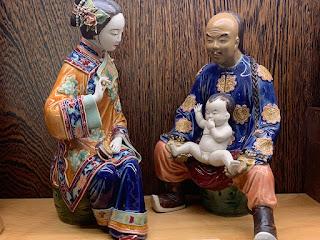 Thus far the weather on this trip has been perfect - highs of 21 or 22 provided excellent weather for touring around to all of these amazing sites. Today, the mercury shot up to 32 and the coming days are expected to be the same or hotter, so we will get to experience the blisteringly hot temperatures that August in Portugal is known for. Fortunately, walking around Evora in the heat is easy, as most of the streets are shaded by buildings, plus it is very dry here so the heat doesn’t hit you as bad as in humid conditions. We spent an hour or two just wandering around, getting lost, and finding amazing things around nearly every corner. The kids got a little bored after a while so they went back up to the room while Ana and I sat at a cafe for afternoon drinks. 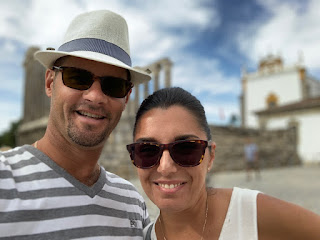 Dinner was the best of the trip so far - Ana and I had cod and shrimp casserole while the kids enjoyed the Bife No Pedra (steak on a rock) where they got to cook their own meat on a blazing hot stone at the table. The restaurant was just one of many on a street just around the corner from our hotel, and the entire area was packed full of tables and chairs, all of them full, with people speaking a dozen different languages, all having fun. Such an amazing scene, especially with the bright, full moon above. 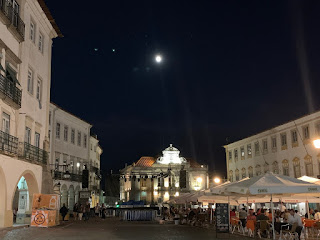 The evening was finished off with coffee in the massive Giraldo square, but we didn’t stay long as the weather had really cooled off, but made for a lovely night’s sleep with the windows wide open and the fresh breeze blowing in.
Posted by Kristofor Olson at 3:56 AM