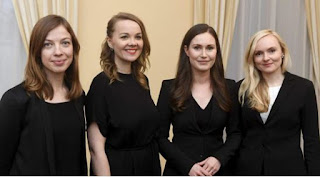 Is it just me or has there been a surprising lack of hype surrounding the end of a decade?

Strangely, this is a very important decade to be leaving, as we're now finally able to refer to our new decade as the sensible "20's" instead of the strange shorthand we had to come with for the previous two - the "two-thousands" and the "teens". Now whether these "20's" will roar or not remains to be seen, but they will undoubtedly bring a massive amount of change to our world.

At the start of this decade, Ana was working for WestJet, Stella was in junior kindergarten, Magnus was in grade 1, I was working at the City of Brantford, we had just bought our sailboat Bella Blue, we owned a bunch of rental properties, and we were in the late stages of a massive recession. The intervening years have been good to us. We’ve gotten rid of the things we didn’t like (managing tenants), kept the stuff we love (sailboat), and have ridden the wave of nearly uninterrupted economic growth and prosperity. The kids have rocketed through school, racking up excellent grades, learning French, and making friends, and Ana and I have settled into jobs we’re happy with and provide the necessary amount of mental stimulation and financial compensation. And we’ve travelled, man have we travelled. Despite losing the travel benefits of WestJet, we’ve still managed to get around, by sailboat, car, and airplane, leaving a massive cloud of greenhouse gas emissions behind us, exploring so many incredible places, from remote shorelines of Canada, to nearly all the countries in Southeast Asia, to many Cuban beaches and towns, to a few spots in Europe. But it’s those carbon emissions that really make me stop and think as we accelerate our way towards 2020.

Every year around this time I put together an annual report for our family and have been doing so for the past 15 years. This report is a Powerpoint slide presentation and reviews safety, personal accomplishments, progress towards goals we set for ourselves the previous year, our family income and expenses for the year and what percentage we saved, as well as our family’s overall net worth. We then conclude with personal and family goal setting for the upcoming year. Why do this, one may ask? For me, this is an integral part of our planning and helps us to keep on track. Like they say in the management guru books, if you can’t measure it then you can’t manage it, so I measure and track everything I can. If you don’t take time to write down your goals, and check your progress against them, then how do you know how if you are moving in the right direction, whatever “right” may be for you? But to be honest, the real reason I do this is because I am a geek and I love numbers and planning and making lists!

This year I did a deep analysis on our family’s carbon emissions. This is very difficult to do to a high degree of accuracy, but it is surprisingly easy to get a rough estimate with one of the many free online calculators, and you can easily compare your carbon footprint to the average across your province or the country as a whole. Our results are not great – we are about average for emissions produced through driving, below average for household heating, and twice as bad for airline travel. I can’t say I was surprised at the results. But the question is, what are we going to do about it?

There’s little doubt that 2019 was a big year for the environment, and it feels like the tide of public opinion may be turning with the efforts of climate activists, government initiatives, and the weather itself causing what seems like abnormal destruction. I think reducing carbon emissions is the right thing to do, but not for the same reasons that we always hear, such as keeping global temperatures to less than 1.5 degrees increase by the end of the century and slowing the melting of icecaps and the resulting sea level increases. I am much more selfish. I want the world to reduce carbon emissions because burning carbon is fucking gross and wasteful and there are better options available. Do I care about the small island nations that may be flooded by global warming? Sure, I guess so, but only in a very abstract way. Do I care if temperatures go up? Living through Canadian winters makes me think that’s actually a pretty good idea. Do I care about massive weather disasters? Yes, but only the ones that will affect me personally which are thankfully few in the part of Canada in which we live. Am I selfish? Yes. And the expectation of individual selfishness is what underpins the economic theories of capitalism, and governments planners ignore this aspect of human nature at their peril.

Do you know what I do care about? When I am standing on a street corner in the center of our nice little town, and all I can smell is vehicle exhaust, and all I hear are noisy gasoline and diesel engines from 7000 pound Ford F150’s transporting a single 190 pound person from place to place. Or when I’m standing on a street corner in Hanoi, Vietnam and I have 300 2-stroke motorcycles coming at me in a cloud of blue smoke as I choke on the noxious gasses enveloping the city. Or when I’m driving to work on the highway and I see a cluster of emergency vehicles around a tangled mess of vehicles and a paramedic doing chest compressions on yet another car crash victim, who was likely driving because there’s no public transport options available to get from place to place.

The current arguments for reducing carbon emissions (“it’s the right thing to do”) are ineffective because people are generally only willing to change their behaviors when there’s something in it for them. Which is why a high carbon tax is one of the easiest and most effective ways to force people to reduce their emissions – because there’s something in it for them (less cost). Can we appeal to humanity’s natural altruistic nature? Maybe, but that’s a hell of a lot harder than just nailing them with taxes to discourage the behavior we don’t want.

Saying all that, as a family we decided that we do want to do our part in reducing carbon emissions and wanted to see what sort of things we could do to reduce our impact on the environment. First, we measured our approximate carbon footprint (using the online calculator https://app.projectneutral.org/dashboard) and found our family creates between 25 and 30 tonnes of carbon per year, compared to the Ontario family average of 25.5 tonnes. We then assembled a list of all the possible things we can do to reduce those emissions. It then became an exercise in deciding which of these things we are willing to do. And it turns out we are less willing to make significant changes than I would have hoped. Are we willing to cut out airplane travel? No, because we love traveling and seeing new places. Are we willing to get down to one car or carpool every day. No, because it’s a scheduling nuisance. Are we willing to move into a home in Brantford so that we are much closer to school and work? No, because we love where we live right now, even if it means a short commute every day. Are we willing to shift to an entirely vegetarian diet? No, we simply love eating meat and fish. Are we installing solar panels on the roof of our house? No, because it is far too costly. Although we hold ourselves to be global citizens, worldly, and environmentally conscious, we’re simply not willing to make the drastic lifestyle changes required to significantly reduce our carbon footprint. At least not yet.

This is not to say we have done nothing, because we do try limit our impact on the environment and do many things such as installing all LED lighting, keeping the house temperature low in the winter and high in the summer, using electric water heating instead of gas, composting food waste, buy locally grown food, driving fuel efficient vehicles, minimizing water usage, buying used goods instead of new, and carpooling when we can. We have also consciously reduced the amount of meat we consume in favour of more legumes and small fish, and we do not change vehicles frequently, instead keeping them well maintained and driving them for as many years as possible. Plus, we buy used goods whenever possible (Value Village and Salvation Army are Ana’s second homes) and avoid buying new unless there is no other option. Some of the more significant changes we are considering is making our next vehicle a hybrid or full electric, buying carbon offset credits for our flights, and buying our home energy from a renewables provider.

So as the decade comes to a finish, the environment is something the Olson family is thinking about a lot, trying to figure out what we stand for, how we can reduce our impact, and most importantly what we can do as the Earth’s stewards to ensure our grandchildren and their grandchildren will have a beautiful and sustainable world in which to live. If we can’t provide that, then we really haven’t done much.

Oh, and in case you are wondering what the image is all about, this is a photo of the leaders of Finland – all women in their 30’s. If this is an indication of how politics may be changing, then I think there is good reason for hope and better global decision making as we roar into the 20’s!
Posted by Kristofor Olson at 7:22 AM