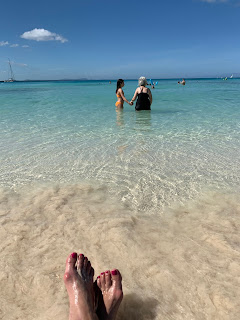 The one thing I had been looking forward to the most in Cuba was the early morning walk. I am always up dawn and looking for buddies to join me for “Walking Club” as I call it. Ana and I strolled the full length of the Playa Pescero beach, enjoying the sun rays reflecting off the calm water, the flat and moist sand, the lightning fast ocean birds running back and forth where the water meets the sand, and mostly the beautifully warm and moist Caribbean air, rehydrating our winterized and parched skin.

We all met up shortly after 8 am for a gigantic breakfast at the buffet and it was delicious - eggs, ham, croquettes, fresh juice, yogurt, pastries and very good coffee. Say what you will about the food in Cuba, but the breakfasts are always fantastic. We recognized many of the staff from our visit at this time last year, and it seems that once a Cuban gets a job at a resort, they have no reason to leave, as these are some of the best jobs in the country, giving them access to tips and goodies from the wealthy foreigners.

After breakfast we went down to the beach and set ourselves up under some shade near the beach volleyball courts. The beach was packed full of people and it was already hot and sunny. It seems that the majority of visitors here are Quebecois as nearly everybody was speaking French. Fortunately, this is a very family oriented resort so there aren’t a lot of young, crazy Quebecers drinking everything in sight and smashing up the place (which we’ve seen at resorts in Varadero).

To pass the time we snorkel, look for hermit crabs, walk up and down the beach, and laze sleepily in the beach chairs. The hours go by very fast at these resorts and soon it’s time for lunch so we go to the small seafood restaurant near the beach for seafood soup, fish tacos, octopus, and shrimp cocktails, washed down with a glasses of beer. The kids remembered this place from last year because it has a self-service ice cream machine, so they self-serve and walk out with mile-high cones. Magnus reckons himself to be the ice cream expert as he worked in an ice cream shop this summer, but the first one he makes is thin, lopsided, and quite ugly so we tell him he’s lost his touch, which he protests.

We made a big move over to the main pool and set up base camp then went for a swim and enjoyed a couple of Cuba Libres at the swim-up bar. Stella had a small toy turtle which worked well as a projectile so we played a riotous game of turtle tag, which would have gone on all day if Stella hadn’t whipped it and hit a nice Quebecois lady right in the chest. We called off the game.

The afternoon chill-out session back in the room was interrupted (in a good way) by John and Maria who must have gotten bored on their room, so we all packed onto our balcony and enjoyed some rum and cokes (the maid had left us a 26 ouncer of local rum), while I smoked a fine Cuban cigar. Once night fell and the no-see-ums started gnawing at our ankles, we left for the buffet and had a nice meal accompanied by moderately plonky red and white wine. During dinner the distorted, shrieking, wonderful laments of an electric guitar erupted from the lobby area, and I just had to leave the gang to go and investigate. What I found was a fifty-year-old Cuban guitar monster shredding on his axe to the recorded sounds of popular guitar tunes like Sultan of Swing, Panama, Summer of ’69 and some other songs which weren’t even guitar solo tunes, but he greased them up and laid down deep, powerful licks just like Gene Simmons’ tongue. Man, was this guy amazing! His solos lasted far too long (in a good way) and his fingers skipped up and down the fretboard so fast I could barely make them out, so instead of trying to figure out what he was doing I just sat back and enjoyed the tapping, bending, sliding and wailing of this guitar god.

The lobby bar was our hangout for a while, and we played cards and dice waiting for the evening show to begin. John and Maria bailed immediately after we learned it was going to be a fashion show, but we held on and made it through the first 20 minutes of the show, which featured four models showing off strange, all white clothing, but mainly their finely tuned, young Cuban bodies.

And with that, I proved once again that anybody can stay up late drinking free all-inclusive booze, partying hard, and getting rowdy, but it takes a real champ to call it a night at 9:30 with no apologies.

Posted by Kristofor Olson at 8:46 PM

Email ThisBlogThis!Share to TwitterShare to FacebookShare to Pinterest
Labels: Cuba