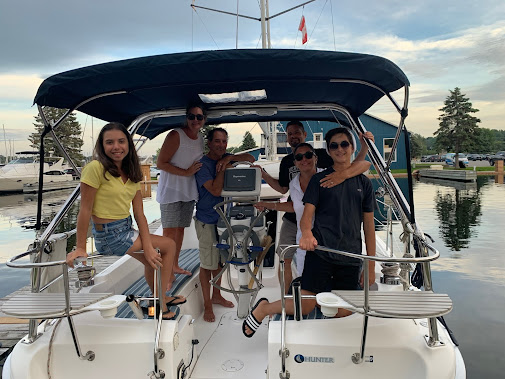 Today was going to be an interesting day. Tony and Angela’s buyer was coming for a sea trial at 10am and, if satisfied, would then be handing over a cheque for HQ2. We were hoping to hear from our potential buyers today as we were trying to figure out what to do next. Time was running short and we had a lot of miles between us and Sarnia, but still had a few more stops we wanted to make along the way. Our friends Justin and Heather had been in touch and were going to be passing through Collingwood tomorrow so we wanted to sail there to meet them, but if the buyers wanted the boat then that was not going to be possible as it was in the opposite direction. So we waited, and hoped that that HQ2 “sold” first so we’d get that free dinner!

Just before 10am we got a text message from Mark - Bella Blue was sold! I could hardly believe it. After a flurry of texts and discussion we decided to head out to Lion’s Head overnight tonight, then continue across Georgian Bay and back into the North Channel to deliver the boat to them in Little Current. Mark offered to give us a ride all the way back to Paris, then he could pick up the sailboat storage stands which were included in the deal. All in all, the whole thing worked out perfectly - we didn’t have to sail to Sarnia, we’d get a couple of extra nights in the North Channel, Mark would be able to spend an entire day with us in Little Current training on Bella Blue, and we had a ride home. Pending no unforeseen disasters, we would have the next few days to enjoy our remaining time on the boat, then be back at home in time for the weekend.

We celebrated the news by taking a long, hot walk into Midland downtown on the nice waterfront pathway. The downtown was in a state of massive construction as they were halfway through ripping up the entire street and sidewalks and replacing it with a beautiful, modern streetscape that looked to include cobblestones, parklets, bike path, room for trees, and outdoor furniture. As a result of this most of the stores were closed and the place was a disaster, but it was going to be a nice spot when it was finished. After downtown we walked two hot and mostly uphill miles to a big commercial shopping area where there were dozens of stores - a Winners, pet store, a bunch of fast food restaurants, and even a Superstore where we did our final grocery run. 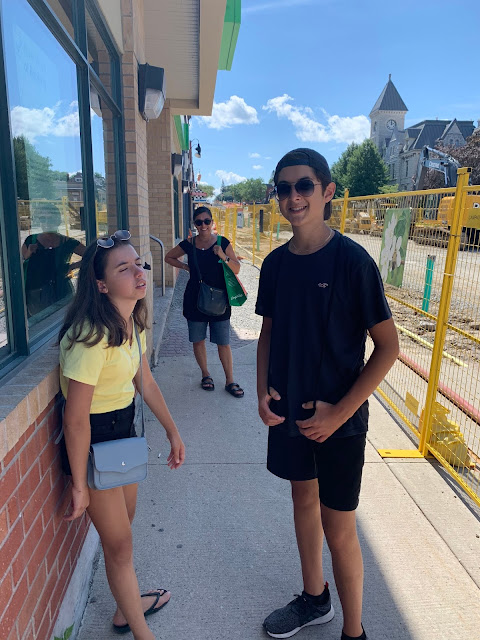 After a taxi ride back to the marina we discovered HQ2 was sold, and that Ken and Sheila (friends of Tony and Angela’s…and ours too - Sheila was the keyboard player in our reggae band) had arrived to spend the night and drive them plus all their gear back to Brantford. We decided that our boat sales happened at precisely the same time, so no dinner was owed, but a dinner would indeed be shared when we returned home. What a turn of events - at the start of the trip neither of us had considered selling our boats, but here we were after an amazing few weeks exploring Canada’s best cruising grounds, with both of our boats sold and left up north, and rides back home. You never know what’s going to happen in life, so you just roll with it and keep things interesting.

Our final meal together as a group was awesome - mushroom pasta, leftover pizza, bbq chorizo, Caesar salad, and a nice glass of some scotch Ken brought. We talked and laughed and wondered how on earth they were going to pack an entire boatload of gear into Ken and Sheila’s small car, which already had two bikes strapped on top. Our buyer had a full sized pickup but we also had a ton of gear so it was going to be tight as well.

After a final group picture and hug on the back of Bella Blue, we pushed off the dock at 8pm, sad to be leaving our friends after such a great trip but looking forward to the grand finale in Little Current. I checked the weather and it looked okay for the night run - west winds of 10 knots, gusting to 15, which might make it a little bumpy but nothing we couldn’t handle, plus the winds were forecasted to lighten up after midnight. The first few hours were lovely as we traveled northward up through the sheltered bay area, looking at the mansions onshore, watching all the fishing boats rushing in under the final light of the day, and enjoying the warmth of the dropping sun. At 10pm I went down for a nap, then woke up at 1am to the sounds of whistling winds and waves smashing into the hull. It was windy, definitely 15 knots sustained, so we reefed the main sail, and I settled into the helm while Ana went down below to try and get some sleep. Stella wanted to do a night shift so she came up after getting a few extra layers of clothes on, and a lifejacket, and we both tied ourselves on with ropes to the helm as the winds seemed to be increasing. By the time we reached the middle of Georgian Bay, we were getting pulverized. The winds were probably up to 25 knots at times with white caps everywhere, spray coming off the tops of the waves - some of the larger of which were in the six foot range, and little stabs of lightening off in the distance. The ride was awful. Stella stayed with me for nearly two hours, then went down and crashed into sleep quickly. Poor Ana was getting seasick again, but not as bad as last time fortunately, and tossed and turned down below, laying face down on the floor trying to find any sort of relief. Magnus slept like a champ, on the dinette, with his leg flopped onto the top of the table to stabilize himself and as far as I know didn’t wake up once, which was a good thing as he would have been sick for sure. We have not had much luck this trip with our overnight sails. 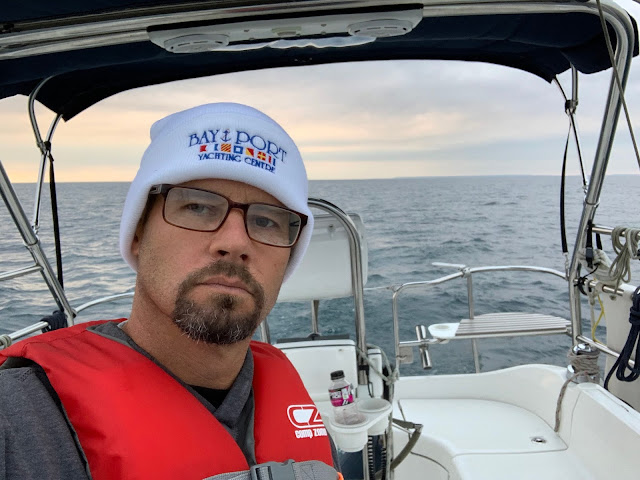 As we neared the western shoreline around 5am, we became more and more sheltered from the wind and waves and the ride improved. By 7:30 we were rounding the point into the Lion’s Head bay and I did indeed see an image of a lion’s head in the rocky cliffs of the point - it was quite a beautiful scene, but I could also have been hallucinating as I was tired beyond belief and having a hard time not falling asleep standing up. Ana helped me get docked on a finger pier caked with goose poo, then we went to sleep, thankful to be off the angry lake. 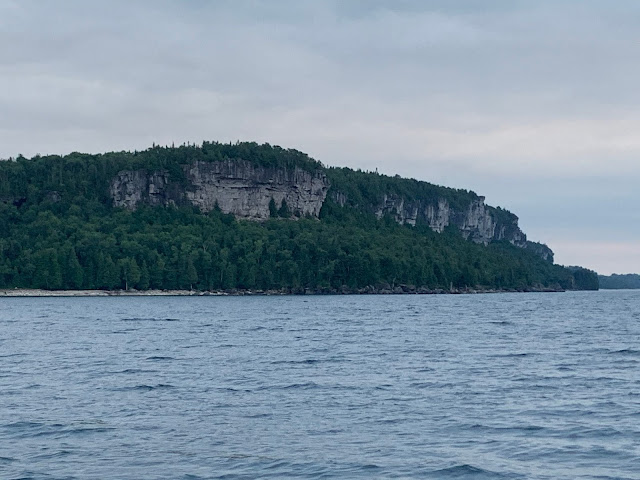 Posted by Kristofor Olson at 9:22 PM