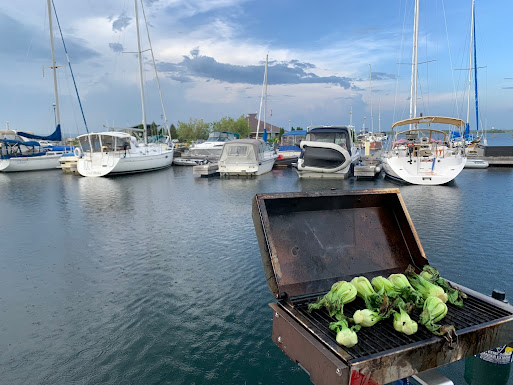 Today’s blissfully short ride of 8 miles to Little Current was going to feel like a walk to the bathroom compared to the miles we logged yesterday. The morning was calm and beautiful and the anchorage looked much less dangerous during daylight hours. Last night there must have been a huge mayfly hatch as the boat was covered in bugs this morning, which is unusual for this area as we’ve been finding the bugs are really only bad for an hour or so at dusk, then during the day you just get the odd deerfly or horsefly nibbling on your ankles or toes. I spent half an hour with the bucket and brush cleaning off the buggage, trying to get the boat back into pristine condition. The kids and I then had our morning lake bath in the warm and still surprisingly clear 25 degree water.

As we were getting ready to depart, I was pulling up the anchor and the kids were in the cockpit looking around. All of a sudden Magnus says, “Dad, I think I see a bear swimming through the channel!!” I looked over and sure enough a black bear was bear-paddling his way across the anchorage entrance with his black head just sticking out of the water. I quickly hauled in the anchor then motored the boat over closer to get a good look at him. The kids wanted me to run right up on the bear so they could jump on its back and take a ride into shore but I didn’t think that was a good idea (for us or the bear) so we kept our distance, but had a great view of him swimming across, pulling himself out of the water, running onto shore, and then standing up on his back legs and looking directly back at us. The kids were thrilled! They had never seen a bear in the wild before so this was quite a spectacle. We had spoken with a boater back in the Benjamins who had told us there had been reports of a bear in the Heywood’s swimming up to boats and actually clawing his way up onto them and eating food left outside, so perhaps this was the perpetrator.

We sailed into Little Current and got docked at Spider Bay Marina, one of the worst marina names I can imagine as boaters are spiders are arch-enemies as those little buggers web up your boat nightly, drop staining poos onto your fiberglass and cushions, and explode on your sails making awful black and green stains. Plus sometimes they crawl into your mouth when you are sleeping - this is what causes bad breath. The marina itself is small, but quite nice with a nice office building, bathrooms and showers. Our new buyer had reserved a slip for the rest of the season so it was already paid for, and the dock hand confirmed we were all set and didn’t need to get registered. 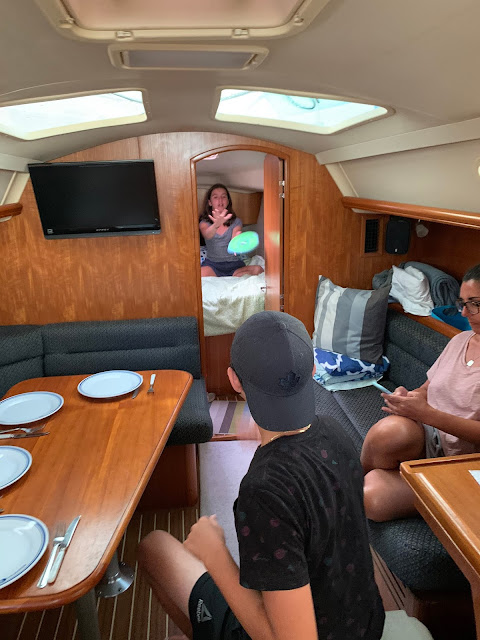 The ladies walked into town to pick up a few things while Magnus stayed in the boat and enjoyed the AC. It was blazing hot outside today with full sunshine and a fair bit of activity happening in downtown Little Current. Ana and I considered stopping for a drink somewhere, but instead we returned to the boat, made drinks, and walked over to the nearby park for a potential swim, but the beach was full of scraggly weeds and goose poo and the water was shallow and mucky so instead we parked ourselves on a picnic table and talked mainly about our next boat.

It was a slow and relaxing evening - I cooked up bok choy on the bbq (delicious) along with salads and some packaged bacon wrapped chicken medallions that we had procured from the $10 bin at Food Basics four weeks ago and had been through at least half a dozen freeze/thaw cycles so were bloody awful and I feared I’d poisoned the entire crew. While Ana and were making dinner, the kids entertained themselves by playing frisbee inside the boat - yes, it is possible, and they didn’t even knock anything over. 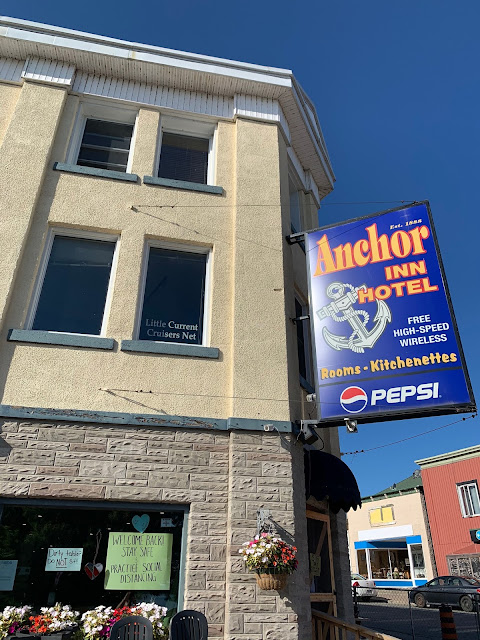 There was mention of watching a movie, but as usual it didn’t happen. I had assembled at least 40 movies on USB sticks ranging in quality from horrible to bad to completely stupid (Nacho Libre, Blazing Saddles, Hot Tub Time Machine - you get the picture), but give me a break - after this year’s COVID lockdowns we have already seen every good movie ever made, so what to do?

Posted by Kristofor Olson at 9:09 AM