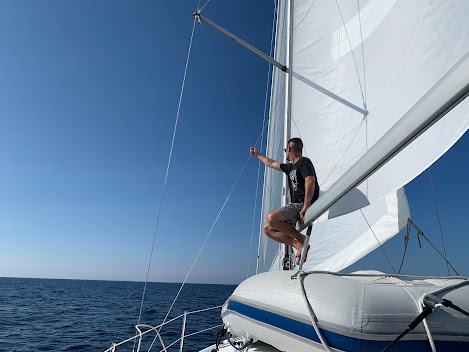 After a couple hours of sleep we got up, showered, shook off the sea foam from last night’s chaotic ride, then walked into town. Lion’s Head is neatly packed into a small bay, with a small marina, a large public park, and this amazing beach they have constructed from river stones - great for people who don’t like sand with their sandwiches.

Our walking tour of the town took a full 20 minutes - we saw the placard explaining the town name, visited the exceptionally well stocked Home Hardware and admired their extensive collection of Yeti drink ware, looked into the windows of several COVID-closed shops, then finished up at Rachel’s Restaurant for a butter tart and coffee. It was a nice enough town, but there really wasn’t going to be much to keep us occupied, so we decided to get back on the water and make the final big run of the trip to Heywood Island, 74 miles north across Georgian Bay, across calmer waters. I checked the weather forecast and it looked good for today so we didn’t want to miss our chance. 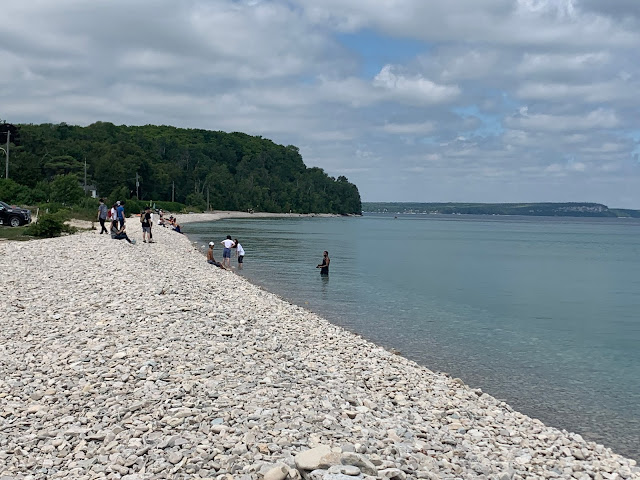 We walked through the park on the way back to the marina and saw all sorts of goose prevention controls, such as red fencing along the shoreline and random patches of planted shrubs which are supposed to keep geese away because they think a fox may be lurking in there. One control I’ve never seen before is a sign that said, “Service dog at work on goose control.” I wondered how that worked? Does a German Shepherd leap out of one of the bushes, grab a goose and rip its throat out in front of a bunch of little kids in the playground? That would be a natural, organic way to control geese, yet a bit horrific at the same time. 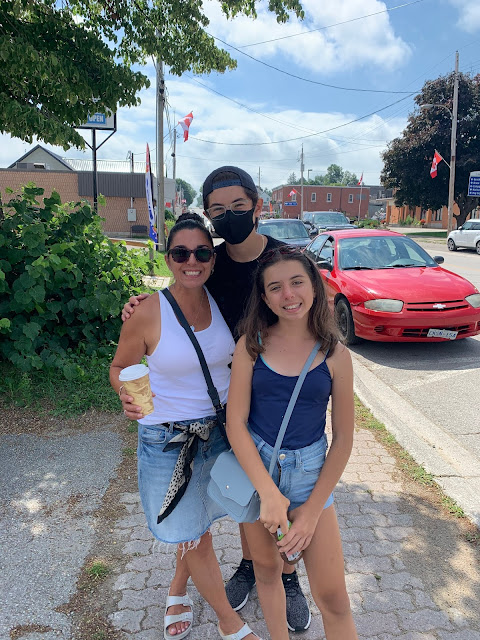 Before we knew it we were back on the water. Based on our speed the estimated time of arrival at Heywood Island would be about 11pm, which meant navigating the North Channel and anchoring in darkness. I wasn’t too excited about that, but the winds looked to be picking up substantially tomorrow and we didn’t need another bad crossing.

The sail across Georgian Bay was excellent - nice steady winds, full sunshine, few boats, great music playing all the way, and Ana cooked us an exceptionally good dinner en route. We passed through or by some interestingly named areas: Half-moon Island, Lonely Island, Grand Bank, Squaw Island Bank, Six Fathom Patch, Papoose Island, and Scarecrow Island Bank. As we neared the turn into the North Channel just north of Manitoulin Island, daylight was disappearing and we could see a thick blanket of fog slowly building behind us. It got closer and closer and eventually enveloped us, but it wasn’t as bad as I feared - just reduced our visibility perhaps by half but didn’t completely blind us. We were now relying on the chart plotter and lighted buoys for navigation, which always adds an additional element of risk to sailing as you can’t actually see much of anything besides individual lights. And when we turned the corner of Partridge Island, we saw a gigantic wall of light - a freighter! Throughout all of our travels in the North Channel we have never seen a freighter and have never therefore had to navigate around one, which presents special challenges. First, they are gigantic, and I mean huge, and cannot stop nor turn easily so you need to take wide berth of them. Second, they do not have simple navigational lights which makes it easy to see where they are going - the entire ship is lighted so on certain headings it’s hard to tell if you are looking at the front or back of them. Third, in the dark things on the water simply do not look right. All you see is light and your senses just can’t comprehend what you are seeing, nor their distances, so you need to be extra cautious and patient. I kept Bella Blue motoring into the channel as the ship still seemed to be quite far, and from what we could tell it was moving north away from us. I grabbed my phone and called up marinetraffic.org - a website that shows you the location and heading of any commercial boat anywhere in the world - but the closest vessel I could see was many miles to the north, which was confusing because big ships always show up. I continued motoring, which was a big mistake. In retrospect, what I should have done is either not crossed the channel, and just waited by the outside channel marker until the freighter either passed or disappeared, or simply called the vessel on the VHF radio to see what direction it was going. 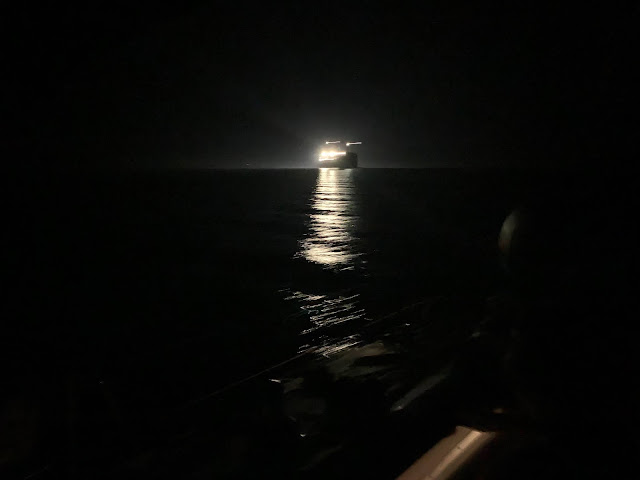 I accelerated to top speed to get across as quickly as possible. We still couldn’t tell which way the freighter was going, nor how close it was, and I expected that if we were in the way he would have sounded his horn or called me on the radio. And then I made my third big mistake. Ana and I realized that the damn ship was coming directly at us, and was getting close, and we really panicked as the prospect of a thousand foot long ship weighing a hundred thousand tons crashing into us was terrifying, especially since it would completely crush our boat and be completely unnoticeable to them. I looked at the chart and I was not quite halfway across the channel so I quickly turned the boat around and beelined it back across. Now of course the freighter saw me - they have radar and crew on watch, and probably saw I could safely get out of their way, but when I changed direction, they were not expecting that and instantly sounded their booming horn, which sounded like the damn rapture with Gabriel blowing his supernatural trumpet announcing the end of mankind. They also powered up their search lights and shined them right on our boat so they could see us. Now I don’t know if the freighter turned, or slowed down, or what happened, but we were truly scared and shitting our pants, and just as I reached the edge of the channel the monstrosity passed us and revealed it’s gargantuan size - it looked like a floating city. We were literally shaking as it lumbered past us and we felt like planktons watching a blue whale swim away. Despite all our years of sailing, all of our night passages, all of our encounters with freighters, I still made horrible mistakes, but thankfully didn’t have to pay the price. 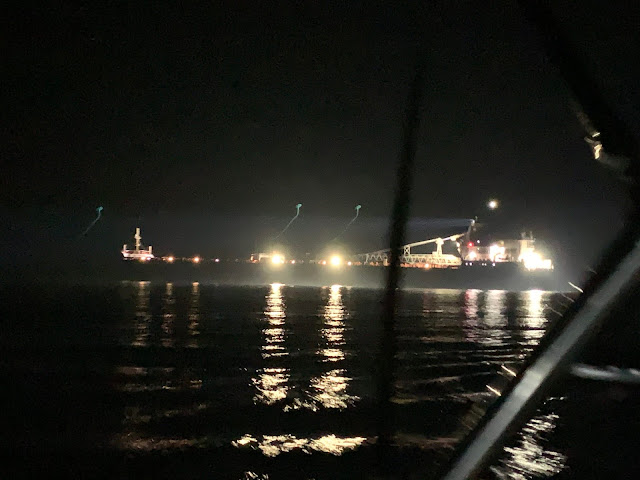 We got back on course and slowly motored toward our destination watching the hulking beast light up the sky, headed away from us. We were happy we scraped through that one and weren’t going to have to deliver Bella Blue to the new owners in small chunks.

Heywood Island was only a couple of miles away and we reached the north entrance to the anchorage and were faced with another problem. We could count at least eight anchor lights from boats already anchored there, and possible more if they didn’t have their anchor lights lit. We have a powerful handheld search light on the boat, which we had tested earlier but the light just reflected back from the fog so we didn’t think it would help us identify boats on the way in. After our close call with the freighter I didn’t want to take any chances, knowing I was probably not thinking clearly after the lack of sleep, but the near disaster induced adrenaline injection sure had me wide awake now. I checked the moonrise time and it was going to be at 11:36pm with a waning gibeous that would give us 65% of the moon and cast plenty of light to help us see our way in. But here’s a question for you. How long does it take from the time of moonrise for it to actually appear in the sky and provide light? I didn’t know either, but we made the decision to wait the 30 minutes to moon rise and see if that would help us, so I held our position about a quarter mile outside the anchorage and we waited. Moonrise arrived, but no moon and no light. We waited about ten minutes then decided to edge closer to the entrance and see if the spotlight could help, and to our surprise the fog had lifted and the light illuminated our path perfectly. I slowly motored the boat into the anchorage while Ana and Magnus stood at the bow lighting our way and pointing out the boats. We slipped in safely, got anchored in 12 feet of water, and then let out huge sighs of relief. We made it.

Posted by Kristofor Olson at 6:29 AM