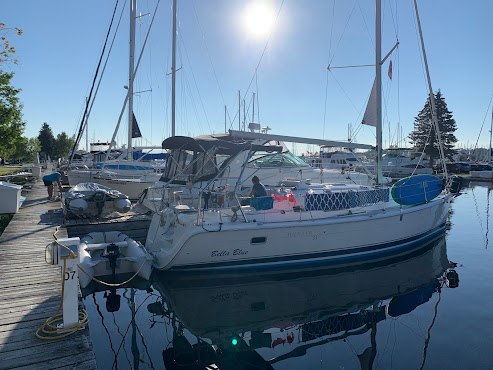 My man Brad arrived at 8:30 am sharp and within two hours he had the new control board installed and the boat’s AC system spewing clean, cold air. I felt so bad for Dan, our temporary air conditioner, as he was immediately packed away into the front berth and unceremoniously ratchet-strapped to the solid steel lightening conductor pole to keep him from flying around the cabin under sail. Dan did a fine job and was an excellent crew member.

Ana and the kids had gone to explore downtown Midland during the AC work, so when they returned we started cleaning up all the excess junk on the boat to get it ready to show. We moved a cartload of stuff onto HQ2 after they arrived, which made the boat look tidy and uncluttered. In the morning I had cleaned every single square inch of her exterior and by the time we were done she was looking absolutely magnificent; in fact, the best she has ever looked and even better than the day we bought her 11 years ago. I think I’m actually going to be a bit emotional when we eventually sell her and I have to hand over the keys, as she has been such a good boat for us. When our kids get older and have families of their own, I know they are going to look back at their childhood and the first thing they will remember are all the amazing days we spent on Bella Blue, with friends and family, on Lake Erie, on Lake Ontario, on Lake Huron, in both Canada and the US, and all those hard earned miles sailing when we were forced to work together, tolerate each other in close quarters, learn to be resourceful, learn to be prepared, handle difficult and sometimes dangerous situations, and be ever exploring new places, meeting new people, and always, always relying on Bella Blue to safely get us where we needed to go. She is going to be missed.

Ana whipped up us a lunch of a Portuguese home staple - potatoes mixed with hard boiled eggs, canned tuna, hot sauce, onions, and balsamic vinegar. Then we realized maybe it wasn’t the best meal to be making inside a small boat just before it is being shown to potential buyers. So we cranked open the hatches, got the fans running, and thought we had fully aired it out, that is until Magnus returned to the boat and said, “Well I sure hope those people coming to see the boat like tuna.” Ana lit a candle.

Mark and Kelly arrived right on time and we liked them right away. Kelly was a teacher and Mark was a cop, so they were public sector leeches just like me and we got along famously, sharing tales of water cooler slapsticks, union scams, long lunches, dereliction of duties, pension entitlements, and retirement at 47. We had so much to discuss. 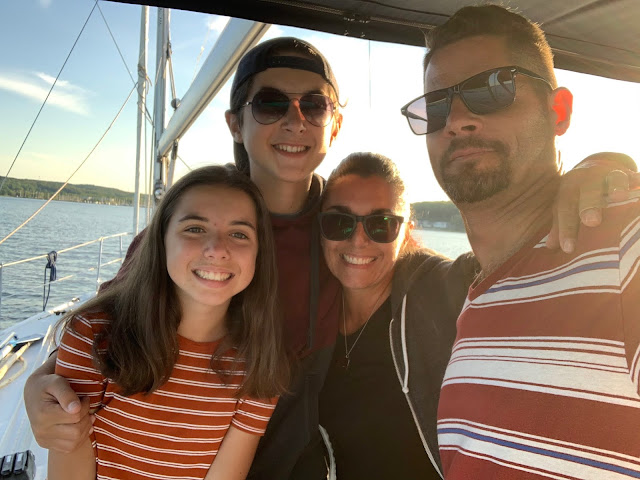 Since we had the time, and they didn’t seem to be in a rush, we showed them every system on the boat, from top to bottom. Well not the bottom, as we didn’t have enough masks and snorkels to go around, but definitely the top and insides. Kelly had sailed quite a bit, but not for many years, and Mark had never sailed before. After speaking with them for a while, they seemed to be the exact type of buyers we were hoping for as they were not hard core sailors, not interested in racing, but were looking for a comfortable and manageable sailboat they could use to learn to sail and to share with their family. After the boat tour we asked them if they wanted to take it out for a sail, and they agreed so I motored her out of the marina then gave Mark the helm. And we honestly had the best sailing of the trip as the wind was steady, the sun was shining, we weren’t actually going anywhere, and we weren’t in a rush. At one point the boat was heeling rather steeply and I looked over at Mark to see his reaction. In cases like this, the most likely outcome is the newbie turning white, shitting his pants, clutching wildly at the lifelines, screaming like a little girl, and vowing to never step foot on a sailboat again, which can be really good and is what we use normally use to get rid of friends and family we don’t care for. But in this case we did want them to enjoy themselves and buy our boat. Mark was smiling and when I asked him if the heeling bothered him, he just said it’s what he’d expect for a sailboat. Good man!

We returned to the marina and I docked it in ass-end first like I always do to show off, and surprisingly it didn’t fail miserably, then we talked a bit about price, timelines (which in our case were short indeed as we were starting our return journey to Sarnia the next day and their home marina would be Little Current in the North Channel). They then said goodbye and that they would be in touch soon. We felt quite good about their visit, but it was entirely possible that they would decide it was just not the right boat for them. So I really wasn’t getting my hopes up, and I always find it’s better to assume the course of action you least desire will happen, then you aren’t too disappointed when it does. But in any case, we really liked them and thought they would be excellent new owners for Bella Blue.

With all the hard work done, I headed over to the marina’s fine pool, and Tony and Angela joined me shortly thereafter, but Ana took a pass. The pool was interesting - it had a three foot deep shallow end, then a steep transition to the rest of the pool which was five feet deep. Angela figured out that if you started running underwater right at the bottom of the transition, you could run full speed and your feet would keep slipping and you could never make it anywhere. The three of us lined up and started sprinting like hell, in a heart pounding race to nowhere. I said, “This sort of reminds me of my career at the City of Brantford.” This brought a chorus of laughter from the HQ2 crew, as they thanked their lucky stars their destinies had taken them nowhere near the public sector. 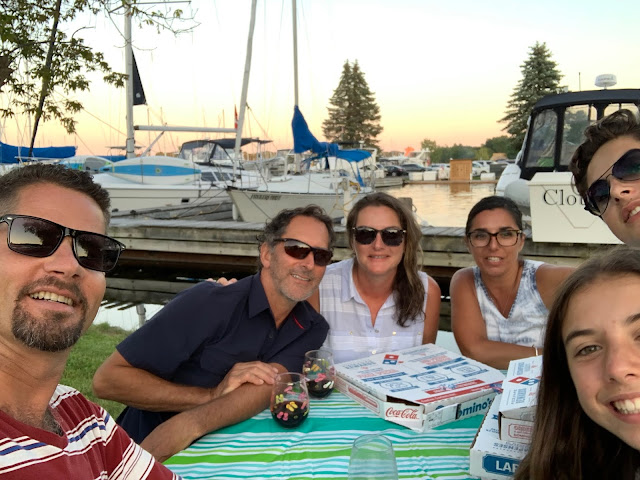 Because it was so nice and warm outside we decided to order Domino’s pizza to avoid cooking and heating up the boats. The pizza was not great, which infuriated Magnus as he is very loyal to Domino’s, but it filled the gap and at least the scenery from the picnic table where we ate was quite nice. We felt surprisingly exhausted after our late dinner so packed it in early for the night.

Posted by Kristofor Olson at 9:47 PM