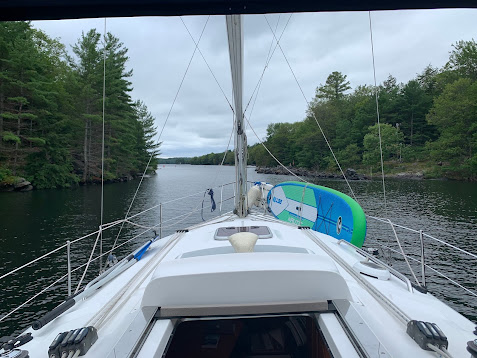 Angela and Tony did the unthinkable and took off before us, as we had to wait for the HVAC guy to show up and diagnose our AC issues. We bid them farewell with the hopes of meeting up later today in an anchorage if all went well. While waiting I had enough time to walk downtown and get myself a haircut. It was supposed to be an appointments only place, but the barber welcomed me in, put me in a chair, and starting buzzing. As I sat there enjoying the sights and smells of the barberia, I noticed something in front of me that I’d only ever seen in my dreams. It was a vacuum hose coming out of the bottom of the counter with a switch beside it. Sure enough, when the cut was done, she pulled out the hose, flipped the switch, and sucked every last piece of hair clippings off my head, ears, neck, shoulders, and face. Why the hell doesn’t every barber shop have one of these??? It seems so obvious, and I’ve even asked barbers over the years why they don’t just vacuum up all that horrible annoying hair instead of only brushing half off it off? After getting a great haircut, isn’t it horrible leaving a trail of tiny hair pieces everywhere you go for the rest of your day, not to mention getting it all over your hands, face and clothes, then the rest on your pillow overnight if you forget to rinse it out. I wish I’d taken a photo of it, best invention ever.

My man Brad showed up around 1:30, looked at our AC and discovered the start relay had burned out and taken out the control board too. But the good news was he was able to jump the wiring and get the system running and confirmed it was in excellent operating order besides the control board. So the next problem was going to be finding one, as I knew the company who made ours was no longer in business. But he said he’d pass the details to his boss and he would try to find one. At least I knew what the problem was now, but suspected the part was simply not going to be available and I’d need to buy a new system.

We had lunch on the boat, then finally left the dock at 2:15, giving us enough time to zip across the bay for a diesel fill and pump-out at Big Sound Marine, then sail the 2 miles to make the 3:00 opening of the Rose Point swing bridge, on the way to the south channel exit from Parry Sound. Well, our dock hand was competent, but very chatty, and provided us with much more local folklore than we needed at this particular time-sensitive junction of our trip, slowing down the pump and dump process, and leaving us with just enough minutes to make the 3:00 swing. But as I motored Bella Blue away from the dock, something sounded wrong with the engine, and sure enough there was no water coming out of the exhaust. Dammit!! So I spun her around and high-tailed it back to the dock, and just as we glided into it, the engine overheat light came on and the engine shut down. I pulled the engine compartment open. The raw water belt was fine, so it was either the impeller or the water intake. I took the easier one and pulled off the intake filter. Jammed with weeds! I dumped them out, gave it a rinse, screwed it back on, fired up the engine, confirmed water was coming out, then gave the thumbs up to the crew and we were back underway. It was 2:50 so I slammed the throttle down, raced as fast as we could, and arrived at the bridge at just 3:05, but there was no sign of it having opened, so we pulled up and tried calling the bridge on the radio. No answer. So we waited. But no dice. We pulled into the nearby marina to wait for the 4:00 opening. At 3:55 we were back in position waiting for the swing. 3:00 and nothing. 3:05 and still no swing. We called the operator and were told, “No swing until 5pm, only every 2 hours.” Dammit! Back to the dock, waited another hour, then finally made it through, and on the way through saw two small signs, one saying the bridge opens every hour, and the other saying it open every two hours, neither of which were remotely visible from the waiting area. Damn government sloppiness. 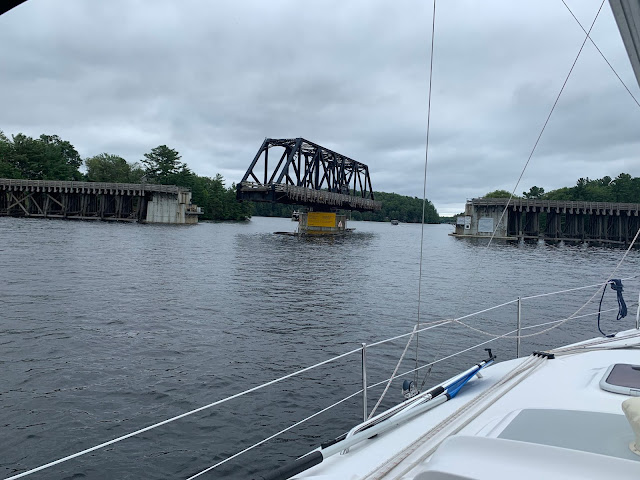 Fortunately the swing bridge delay was promptly forgotten as the rest of the trip through the south channel was simply magical; impossibly narrow passages, many twists and turns, beautiful lakeside cottages, dozens of boats on the water - barges, bowriders, sea-doos, speed boats, working boats, even a small tug with an Azores flag flying, and such beautiful northern scenery. It seems one never tires of rocks and trees. We motored down past Sans Souci Island and past Harry’s, the famous fish and chips restaurant on Frying Pan Island, but sadly had no time to stop for a feeding. We continued into Half Moon Bay and past so many islands - Emerald Island, Pennsylvania Island, Moon Island, Flint Island, Moon Island, and finally into Gilman Bay, where we found HQ2 anchored solidly in the south end of the bay with hundred foot lines winding out both sides of the boat tied firmly to trees. This boat was going nowhere. However, our trusty companions were nowhere to be seen so I pulled out my 150 decibel air horn and gave it a quick, but earth shattering blast, and two stunned bed heads instantly appeared, shocked, then leaped into action and caught our lines as we glided in. So this is what it’s like to arrive second! Up until now the tortoise has beaten the hare at every anchorage, so this was a rare treat, and a wonderfully chosen spot. 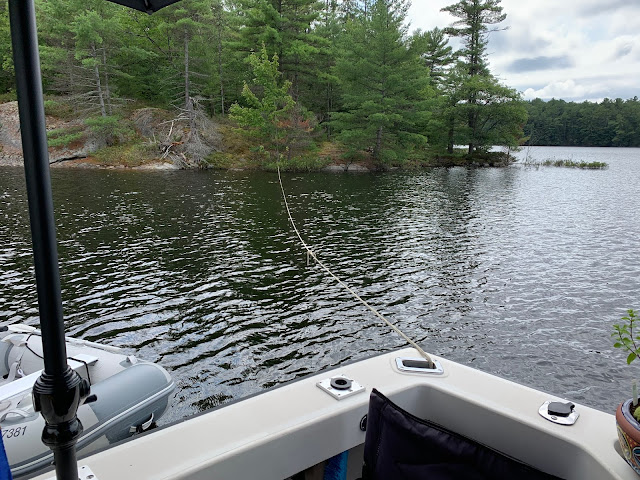 As we shared our stories over happy hour and snacks by lantern light on HQ2, we learned that the massive, rich portions of fish and chips at Henry’s for their lunch stop had rendered Angela unconscious and pushed her into coma territory. It seemed her system could not handle all that whitefishy goodness, and was not even awoken by Tony’s one man comedy show trying to dinghy dual hundred foot lines into the bush with a swinging boat and massive stomach pains from his own lunch overindulgence.

After an action packed 20 mile sail, we gathered, we laughed, and we planned for tomorrow.

Posted by Kristofor Olson at 9:05 PM