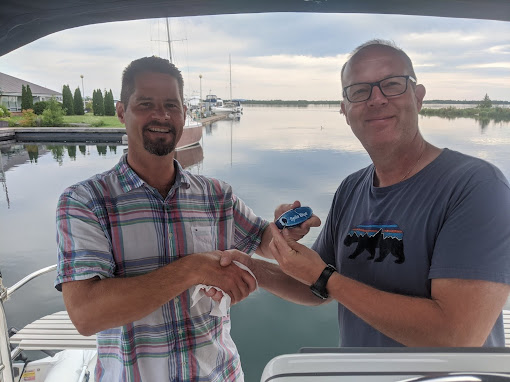 We woke up to a glorious, sunny day in the North Channel and after lake baths and Stella’s last big jump off the cockpit arch, we sailed back into the Spider Bay Marina. Mark arrived shortly after that and we began Training Day. I had put together a list of all the things I wanted to show him, which began with boat documentation and training manuals, so while we were doing that Ana and the kids headed into town for a walk and to explore.

Mark and I went through all of the manuals, discussed training and licensing requirements, then later went through all of the boat systems, with Stella helping out by creating a video of these that I’d be able to send to Mark for his reference. We then all went out on the water and showed Mark how to undock the boat, use the chart plotter and other instruments, anchor, went through some basic collision avoidance rules, then had lunch near Picnic Island. An afternoon sail ensued, and we had nice steady winds to show Mark how to use each of the lines, trim the sails, and maneuver on the water under sail. It wasn’t until 5 or so that we returned to the marina and gave him the helm to practice docking - probably the most difficult part of boating, and he did exceptionally well. Lastly, we motored over to gas dock for a final pump out and to explain the fueling process. As we approached the gas dock Ana simultaneously overestimated the length of her legs and underestimated the distance from the boat rails to the dock surface and crashed to the dock after leaping off the sailboat. But she did something like a judo breakfall, then a masterly stuntman roll and popped right back up with nothing but a scratch on her ankle. The strange thing was that there was nobody there to witness it, and Ana usually saves her docking fails for when there’s a huge crowd of spectators. After she brushed herself off she said to Mark, “So that’s not exactly the best way to come into the gas dock!” 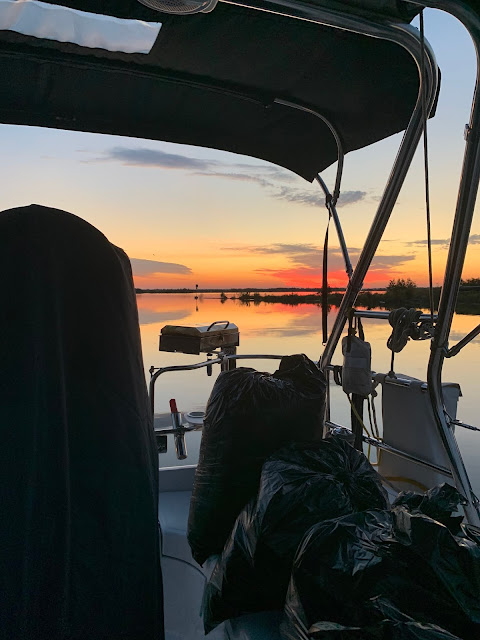 We finished up training day around 6:30pm and we were all thoroughly spent, plus my throat hurt like hell as I was definitely not used to talking all day long. Stella had done some research on the local food scene and guided us to Elliott’s Restaurant where we had fish tacos, pizza, and nachos, then finished it off with desserts - ice cream and an amazing bread pudding, all delicious.

Despite being exhausted, once back at the boat we continued the packing that Ana had already started and worked together to gather and bag all of the stuff on the boat that we were taking with us. And there was a lot - about the equivalent of 20 black garbage bags, and by the time we were done there was so much stuff piled up that Magnus had to sleep on the floor and Stella could just squeeze into her berth and sleep on the edge of her bed. That was it - our final night on Bella Blue.

Posted by Kristofor Olson at 9:15 AM