Watermelon Anchorage to Good Harbour on Webber Island then Midland 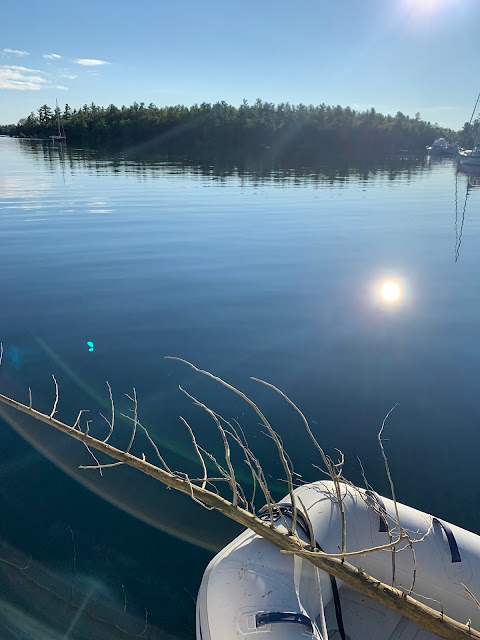 The damn cold weather finally broke and we were rewarded with a perfect morning. Quiet anchorage, glassy water, the sound of birds, warm sunshine heating up the bay water and the smell of instant coffee being brewed up on Bella Blue. It had been at least five days of cool, overcast weather so this was a welcome and overdue change.

I heard back from my AC guy and incredibly he had found a new control board and expected to receive it before Friday! We arranged for the serviceman Brad to drive down to Midland Friday morning and install the new unit, then we could show the boat in the afternoon with a properly functioning AC. I love it when a plan comes together. 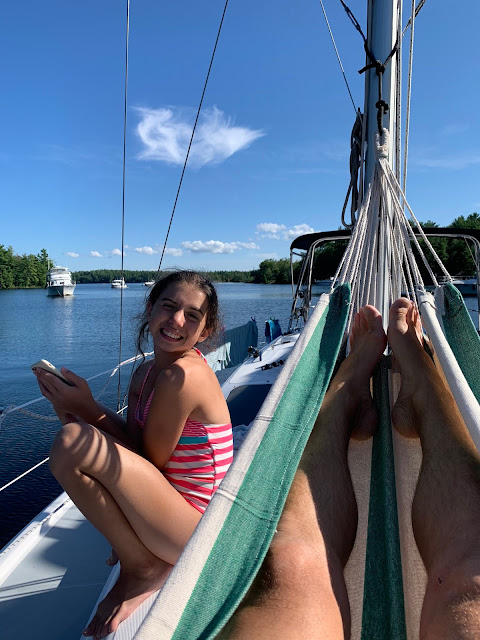 We did a 23 mile sail to Good Harbour on Webber Island, following the small craft route the entire way and fully enjoying the journey on such a warm and pleasant day. The closer we worked our way into Georgian Bay, the more numerous the cabins became, and soon the gaps between cottages were fewer and fewer. I was simply shocked at how many cottages exist in this area, and we learned that some of the oldest ones have been here for over a hundred years, so the government selling off public land to private owners has been happening for a very, very long time. To me, it does seem strange that individual people own entire islands. It doesn’t seem very Canadian to me, as we are such a bunch of socialist animals, but that’s probably just because I don’t own one of them; otherwise I’d be perfectly fine with it. 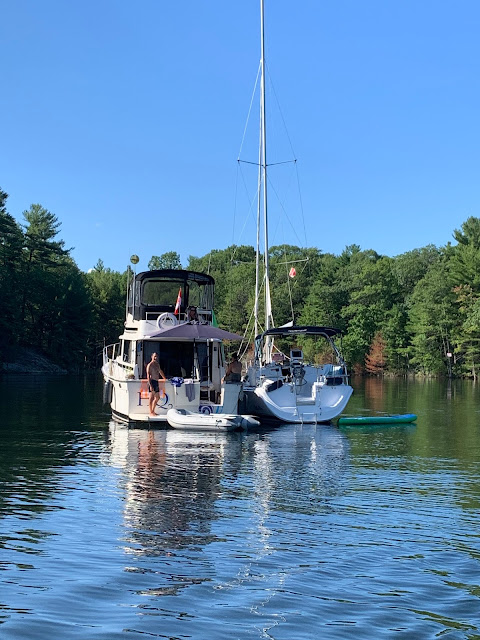 The anchorage was beautiful and nearly deserted when we arrived (only 1 group of 3 boats tied up together) so we grabbed pole position at the deepest and loveliest end of the bay and set anchor. As usual, it took a couple of attempts, but we finally stuck it then went for a swim and enjoyed the warm, delicious water. Soon a whole flock of boats arrive and started dropping anchor all over the place, but they didn’t try to deke me out and we maintained control of the end of the bay. HQ2 soon arrived, tied up to us, then we resumed goofing around by hanging hammocks on the boat, leaping off Bella Blue’s cockpit arch with the Prestone rope swing, paddle boarding, dinghying, having beers and snacks, and enjoying the gorgeous weather. 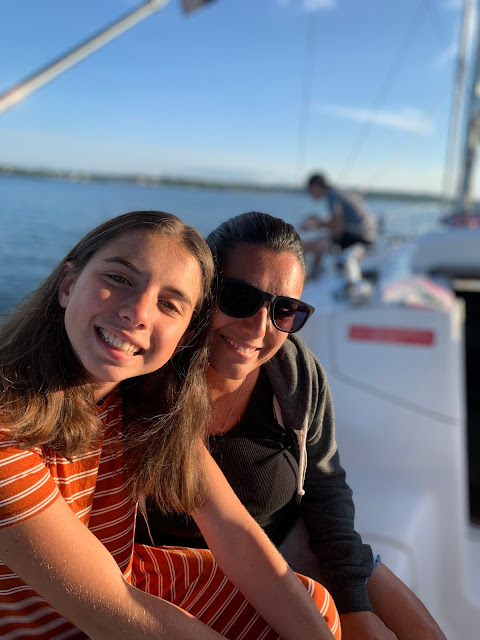 Around 5pm, we pulled anchor and left HQ2 there for the night while we continued on the 14 miles to Midland, in order to be ready for the AC guy and potential buyers the next day. We travelled through Honey Harbour en route and had a nice, relaxing sail, arriving around 7:30 in Bay Port Marina - one of the nicest marinas we’ve ever seen in Canada, then assembled a delicious dinner of BBQ pork loin, corn, boiled potatoes and green salad. Just now I realized how often I mention food in these journals, but trust me man, any food cooked on a boat tastes twice as good as a similar thing cooked on land. I don’t know why, but that’s just the way it is.

Posted by Kristofor Olson at 9:32 PM