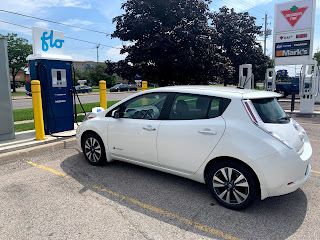 Three years ago we decided as a family to focus on reducing our carbon emissions. You may say, "Well you are a little late to the party" so let me explain. While it has been many years since we recognized the problem and started making some attempts to reduce our consumption of fossil fuels, we were not doing it in any sort of structured way. We decided it was time to stop and consider our actions. We could either bury our heads in the sand and continue to be a part of the problem or we could try to be a part of the solution. We went with the second option.

Why do we care? Well, maybe not for the same reasons as some others. I'm not the guy that says "Climate change is going to destroy the world! Island nations are going to be flooded, hurricanes are going to destroy everything, bugs will eat up the forests, all the coral will die, Africa will burn up, and the Arctic will melt." I tend to think that humans are very good at adaptation. We will use technology and ingenuity to cope with whatever effects climate change brings. We are very good at solving problems when disaster is imminent and our survival depends on it. Also, the earth has gone through phases of being both much hotter and much colder than it is now. Who's to say what the "right" temperature is? Nature will always find a way.

I care about greenhouse gas emissions for two reasons. First, burning oil is fucking gross. Think of the smell of parking garages. Think of standing at a traffic light in a nice downtown area, choking from the exhaust coming from the traffic congestion. Think of the obnoxious roar of a Harley ripping by as you are taking a peaceful walk through your neighbourhood. Think of the rainbow hue that develops around petrol stations when it rains. Think of the reek of the greasy, oily rags hanging in most people's garden sheds. I even think of the disgusting stink of the burning diesel when we used the motor on our sailboat.

Secondly, the way we burn oil is wasteful. Oil is an incredibly valuable and non-renewal commodity but we don't treat it like that. Because it is so cheap, and we are so efficient at extracting it, we burn it unnecessarily. If we're hoping the Earth will still be supporting humans in 10,000 years, then why are we trying so hard to use up all of its resources now? It doesn't make sense. It insults my prairie-sensibility and sense of stewardship.

To turn ideas into action, we decided that the best way would be to incorporate the calculation and monitoring of our family's carbon emissions into our annual planning exercise. If you can't measure it, you can't control it.

Since 2005 I have been preparing an "Annual Report" for our family which is a review of how we did during the year across a range of areas such as Finances, Travel, Fitness, Employment/Business, and Personal goals. We typically review the goals we set the previous year and measure how well we performed, then set new goals for the upcoming year. I typically spend several days over Christmas generating spreadsheets, looking through purchase receipts, reviewing investments, tallying, analyzing, and eventually compile a year end package of reports and a PowerPoint presentation.

And now you are thinking, "WHAT A NERD!" and you would be right, but I do get a lot of enjoyment from the exercise (it's the Finance guy in me). It has become even more fun since adding in the calculation of our family's overall carbon emissions. With all the traveling our family has done, we've left a cloudy trail of greenhouse gasses all over the world with hardly a thought. So in 2018 I first calculated our family's total emissions for the year (it was awful, way worse than I was expecting) and then together we compiled a list of specific things we could do to reduce it. One of these was to look into an electric vehicle to replace one of our two gasoline powered ones.

It has been one year since we bought our first EV (electric vehicle) - a 2017 Nissan Leaf. It was a PowerPoint presentation Magnus did that convinced us it was time to make the leap. As part of a school project he did an analysis of the electric vehicles currently on the market and sat us down one evening to convince us why investing in an EV would be an excellent idea, and why that vehicle should definitely be a Tesla or a Chevy Bolt, but definitely not a Nissan Leaf. The main reason, he said, was the range. The newer models of the Leaf claimed a range of about 180 kilometers, compared with the Tesla or Bolt which were hundreds higher. What he did not weigh heavily enough though in his analysis was the cost of buying the vehicle.

We bought a three year old Leaf for $19,000, which was far lower than we were expecting to pay for a relatively new EV. The car was in pristine shape and had only 21,000 kilometers. I had budgeted for the installation of a Level 2 fast charging station at home, but after a while we realized that the onboard standard charger, which simply plugs into a regular outlet, was able to charge the car back up to 100% overnight since our daily usage was normally well under half the available range. That was another couple of thousand dollars we did not need to spend.

The experience of owning an EV has been nothing short of amazing. Most people think you buy an EV to simply replace your gas vehicle and keep on using and driving the car the same way, but I've learned this is not what happens. For a two vehicle family like us, the gas one has become a pariah, a social outcast, a heel, an untouchable. We have changed the way we use our cars such that the EV is driven as much as possible and we only use the gas one when we need the range - which is rare, or if we need to be in two different places at the same time, which is also rare (especially now that I am working from home most of the time).

The way you drive is different too. You are hyper aware of the energy you are using in the car, because the range gauge adjusts instantly depending on how you are driving and what you are using in the car. Do you really need the heat or AC on maximum? Do you really need to be driving at 120 kph on the highway? In a gas car you hammer the accelerator to get up to speed, then when you approach a traffic light you hammer the brakes, which turns into all of that potential energy from the movement of the vehicle (created by burning fuel) into heat and worn brake pads. This energy is completely wasted. In an EV, you don't use the brakes like this. Instead, letting off the accelerator engages a recharge mechanism that turns the vehicle's momentum back into battery power. In fact, when you are going down a hill, or slowing down from the highway onto an exit ramp, you can often see the range meter moving higher as the battery gets repowered. After getting used to this, you start to really hate the brakes on you gas car as the waste is so much more evident.

One other thing - idling. When you come to a stop in an EV, everything goes silent. It is using no energy. When you stop a gas vehicle, that motor keeps on running needlessly. Being stuck at a long traffic light idling in my old gas vehicles used to bug me a bit, but after driving an EV for a year, it now drives me insane. The same thing happens at the fast food restaurant drive-through - all those idling vehicles spewing their shit into the atmosphere while they wait in line. It's gross.

Now some might say, "Now hold on there Krissy-boy, I've read that the overall environmental impact of driving an EV is just as bad as a gas car because of the materials used to build the batteries." This may have been true in the past, but I think many of the issues around this are being solved, and the process will continue to improve over time. Also, the electric engines on EVs are built to last for a very, very long time - we're talking a million kilometres, so as long as the body lasts these cars can go forever, and they go without the need for oil changes, transmission fluid changes, belt replacements, and all those little gremlins that plague internal combustion engines.

Lastly, costs. Our average yearly gasoline expense before buying the EV was $2514. In the past 12 months we spent only $483. By my best estimate, the yearly cost of electricity for the EV is about $360 giving us a net saving of around $1671 on fuel. I can probably add on another $200 - $300 on savings from fluid changes and other maintenance costs I'm avoiding. These cost savings are nice, but the main factor for us really is the reduced environmental impact of having an EV. Of course, having no car at all would be far better, but we're just not at the stage of life where that is possible.

One thing that I've learned over time is that you can't control what other people do. Everybody has to make their own decisions and come to their own conclusions. You can only control yourself and your own impact on the world, and that's where you have to start. But what I can do is write these blogs, talk to people, and share my experiences. Every little bit helps.

Posted by Kristofor Olson at 5:21 PM