When Are Farts Funny? 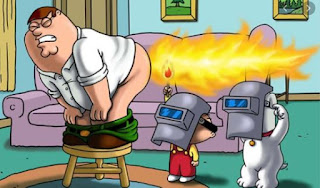 We had a heated conversation around the dinner table last week. The topic was not Covid, nor was it politics, nor was it really anything of societal significance. It was about farts - specifically, is there any humoric value in farting at the dinner table.

As expected, opinions were mixed, pretty much split down the line between the male and female members of the family. In our house, farting is not allowed at the dinner table, but it has happened, and when it does I can't help but laugh, which in Ana’s opinion, makes me even more guilty than the instigator. But it started me thinking, when are farts funny? Or perhaps more challenging, when are farts not funny?

I come from a family with a well-developed sense of toilet humour. But what would you expect from a family with three boys, growing up in Saskatoon, with a large number of rowdy uncles? There is a strong culture of depravity on the prairies with many disgusting innovations originating from this part of the world, such as the Farmer Hanky (also known as the Farmer Blow), the Blue Angel, and the Hide-A-Dump game, though to be fair I think Hide-A-Dump was actually invented somewhere on the East coast – those guys are even more twisted than prairie folk.

My brothers and I started experimenting with toilet humour early on. One of my fondest memories as a kid was doing a number two in the main bathroom, then asking my youngest brother if he wanted to see this cool science experiment I was working on for school. He energetically agreed so I pointed him to the toilet in the bathroom and told him the experiment needed water so I set it up in there. He went for it! Then my other brother and I locked him in there for a while by holding the door shut. Surprisingly, we fooled him again a couple years later, but I haven’t tried it on him recently.

But back to the focus of this essay – how to know when a delivered fart will be considered funny. Let’s explore a few scenarios.

Me and my brothers were subjected to this ritual humiliation often as kids. Although it wasn’t funny for the person flipped onto the ground with a big hairy guy’s knees pinning down your arms, it sure brought gales of laughter from the farter and bystanders. I wish I could see my nephews more often to provide this wonderful experience for them.

Farting in an elevator – Not funny.

There is an unwritten social rule that you just don’t fart in elevators. There is literally nowhere to escape and people are probably going to know it’s you unless you keep it real quiet or have the gift of ventriloquist farting where you can throw it to the guy on the other side of the elevator. But in any case, you still have to suffer the aromatic consequences along with everybody else.

Farting on an escalator – Real funny.

This is hilarious. In fact, I think the person who invented the escalator probably had a sick sense of humour and was thinking this all along. Farting on an escalator and letting the movement automatically waft the smell to the people lower down is ingenious, and there’s almost zero chance of getting caught.

Farting in front of grandpa – Can be funny.

This all depends on your grandpa. The grandpa on one side of my family found farts extremely funny, but the other one not so much. In fact, if you farted in front of him you’d likely get tossed out of the house.

Standard social decorum states that farting at the dinner table is ghastly, yet when somebody does it everybody laughs. So I think it is funny, except that whenever it happens and I laugh I get in more trouble from Ana than the farter does because she thinks I’m encouraging the behavior. My defense is, it’s just as hard trying to hold in a laugh as it is trying to hold in a fart, and equally damaging to one's health.

Farting at a dinner party – Not funny.

I can’t remember ever being at a dinner party when somebody let fly. I have a feeling it would just be incredibly embarrassing. But if I was at a soiree where somebody farted I’d probably either laugh or say something stupid like “Bad doggie!” to break the tension.

Once you get over the initial shock of hearing a girl fart, how can you help but laugh? Especially when it’s during a yoga class.

Farting on your work Zoom call – Not funny.

I have a feeling people do this all the time, but generally the computer mic or headset isn’t sensitive to pick up the noise. However, if it was a loud one and timed perfectly to occur at a natural gap in the conversation, then the Zoom camera would focus right on the farter and they’d appear full screen turning red and looking real guilty, or maybe whistling. I image news of this would travel fast and everybody in the organization would know about the farter within about 10 minutes, forever cementing their reputation as a “Farty Pants” (assuming it was a man; if it was a women God help her). Not funny at all. If it ever happened to me I’d probably go with the “Bad dog” line to try and shift the blame and avoid social ruin. Except most of my work colleagues know I don't have a dog.

Farting around a campfire – Always funny!

There are few things funnier or more socially acceptable than farting around a campfire. It just feels right. The origin of this social development is clearly the campfire scene in the movie Blazing Saddles. How ‘bout some more beans Mister Taggart?

Farting in bed – Not funny (and relationship damaging).

I’m assuming you are with somebody in bed – if you are alone, go ahead and fart all you want if you enjoy gassing yourself. Farting in bed with your partner is a stupendously bad idea, especially if you ever hope to have sex again. And don’t even think about doing the “Dutch Oven” where you fart in bed with your partner then pull the covers up over her head and hold her in there for a while. Yes, this will provide great joy and gales of laughter as you hold the squirming, thrashing, screaming figure beneath the blanket, but that just not what strong, mutually respectable relationships are built on.

Have a look at Paul Flart and make your own decision. He's one of a grand total of about five people I follow on Instragram.

Farting for a career – Not funny.

If the only skill you’ve managed to rack up in your life is to be able to fart on demand, I’d say that’s more sad than funny. Saying that, let’s see you try to get through a couple of his videos without laughing.

Every class in school has a farter and nothing cracks up your schoolmates more than farting during a lesson. It’s especially good when the farter blames it on somebody else.

I know somebody who loves doing this. At the grocery store, he will look for an aisle that has no people, then mosey over into the middle of it and release gas. He then hightails it out of there, usually fluffing the seat of his pants to make sure the crop dusting stays entirely in that aisle. Then he waits in the outside section, picking up yogurt pots and pretending to read the labels while he watches for somebody to walk down the aisle. If he’s lucky, it’s a couple and when they walk into the green fog the wife inevitably looks at the husband, frowns and berates him while he pleads innocence. Hilarious!

I remember doing this. As a kid I was a useless athlete and a terrible runner but somehow made it onto the track team in grade 4. I was in the 4x100 relay, in the third position, waiting for the baton. Of course, at times like this I’d get really nervous, and I felt like I had to pee and poo and fart all at the same time, but I held it all in and just squirmed around waiting. Finally, my teammate rounded the track and was getting close to me, so I took off running. As he approached, all of a sudden the slamming of my feet into the track caused a series of mini-farts and it sounded like “putt, putt, putt, putt” and I couldn’t stop it. My buddy caught up to me and yelled, “Agggh, what they hell are you doing, you're disgusting!” as he plugged his nose and nearly tripped. He passed me the baton, which I instantly dropped because I was laughing hysterically and by the time I picked it up, ran my 100 yards, and passed it to the next guy we were way behind and we lost terribly. But at least the dude I passed it to didn’t fart in my face.

Farting in a commercial kitchen – Funny!

Cooks are a depraved lot. One chef I know had a right of passage he put his underlings through. The kitchen newbie would be called over to the grilling line, where the chef was cooking up his meaty masterpieces. He would say to the newb, “Hey, reach down there in the counter and grab me a pan, wouldja?” As the victim reached down the chef would lean over and fart right in his face. The ultimate cooking humiliation and mighty funny.

Farting in the family car – Not funny.

Breaking wind in the family car, especially in the winter, is cruel and heartless. Even when you open the windows, something about the aerodynamics of vehicles just causes the smell to circulate around to everybody and it takes forever to go away. It’s especially bad when you have old people in the car and one of them does an SBD (Silent But Deadly) then pretends like nothing happened and everybody just suffers in silence. One time we did a family ski trip down to Montana and the three of us boys farted the entire 10 hour drive. My parents gave up yelling at us after hour three. By the time we got there the air quality was so bad the vinyl on the Suburban seats was melting and the stink had penetrated all the luggage. My ski boots still smelled bad days later.

There’s just something magical about farting underwater. The sound is amplified, the smell is intensified, you get the visual impact of the bubbles – it really is amazing and is always funny. Bathtubs are the best, especially when the people on the downstairs level hear the rumbling bass tones from the underwater release. Hot tubs are great too, as long as the smell and the heat doesn’t cause any of your fellow tubbers to lose consciousness.

To finish off this disgusting little blog entry (but I hope it’s a nice break from all the depressing pandemic news…) I will leave you with a few gems of potty humour, taken from the late 90’s when the primary use of email was still passing jokes around.

Ran out of toilet paper so had to start using lettuce leaves…today was the tip of the iceberg.

Did you hear about the constipated mathematician? He worked it out with a pencil.

I got in touch with my inner self today. It’s the last time I use 1 ply toilet roll.

It’s embarrassing when there is no toilet paper and you need to go and get one with your pants down doing the duck walk. Luckily enough the supermarket is just round the corner.

Posted by Kristofor Olson at 7:34 AM