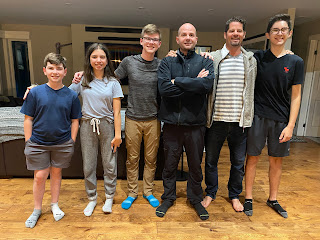 The weather finally turned and the four of us found ourselves alone on a beautiful and sunny morning. This seemed to be the pattern this summer – weekend weather has been generally shitty and cool while back to work Mondays have been nice. But that’s coming from a working person -anytime you ask a retiree about the summer weather they always say it’s been fantastic. This is because they haven’t got a clue what day it is most of the time, and when the weather turns bad they just sleep all day or play Scrabble.

We enjoyed a leisurely breakfast with the kids, then came up with a plan to fill SeaLight’s two water tanks. We weren’t able to get her into the dock, but we were able to find several of Andrew’s garden hoses, latch them together, and create a giant 200 foot hose. Using the same rope we used to tie the stern of the boat to a shore tree back on Leek Island, we employed the same method here and were able to position the boat as close to the dock as possible, but this did leave 80 feel of tight decapitation line ready to take out the next Sea-doo’er that decided to buzz the dock throw a big wake to rock the boat. Boy, was he going to get a surprise.

This past week I had been quite occupied trying to figure out why the boat’s bilge kept filling up with water. I finally discovered that the rubber shaft seal which prevents water from entering the space where the prop shaft exits the boat was leaking like mad. Marty and I had tried to put a clamp on it to reduce the drip, but the access was extremely tight and we just couldn’t maneuver it into place. The old owner had left a number of spare parts on the boat and fortunately there was a spare seal, but in order to install it the boat would have to be hauled out of the water. Ana and I really didn’t want to do that, but we also didn’t want to spend the rest of the season with a badly leaking boat that was one bilge pump away from sinking the boat so we called Collins Bay Marina in the west end of Kingston and arranged for a lift out the following day. According to Youtube, the process of changing the seal looked fairly straightforward so I expected the job to only take a couple of hours then we would be on our way.

We dropped Magnus off at the gas station where he was picked up by my work colleague on his way back to Brantford, then the three of us I continued on into Kingston to pick up a few more supplies and go for a walk. It was mid-afternoon by the time we returned, so we went for a swim after checking the decapitation trap and finding no victims, gave the boat a bit of a wash, then went back up to the house to meet Andrew and Victoria for happy hour, followed up by a lovely meal of steak, salmon, and fresh vegetables. We hadn’t had them out to the boat in the evening yet so we all dingy’d out there for a drink and lounge session in the cockpit, under the light of a beautiful moon, floating in the calm waters of the Bateau Channel.

Posted by Kristofor Olson at 6:01 AM